It has been a historically challenging first year for President Joseph Biden. He inherited an ongoing global pandemic, economic turmoil, a climate crisis, a 20-year war, and a country torn apart by political and racial divisions.

With the seemingly endless coronavirus crisis, and frustrations over the divisions in Congress between the parties and within the Democratic Party itself dominating the news, a weary citizenry needs to be reminded of the healing and progress that has been accomplished by this President and his administration in the first year. 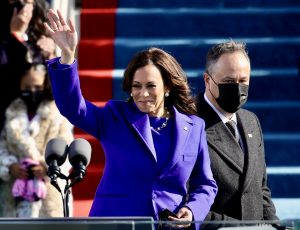 The Cabinet
Biden chose Kamala Harris as his running mate, the first woman and first person of color to become Vice President of the United States and delivered on his promise to pick a cabinet that "looks like America." The first president since Ronald Reagan to get all of his statutory nominees confirmed, half the cabinet are women and a majority are non-white -- the most diverse in history.

The Pandemic
The Biden administration, from day one, aggressively attacked the pandemic through implementation of a national coronavirus policy, executive orders and relief legislation, including passage of the American Rescue Plan in March.

Less than 1% of Americans were vaccinated when Biden and Harris entered office compared to now almost 75% of adults. Over 209.5 million Americans are now protected and children as young as 5 years old may now be vaccinated and 96% of children are now back in the classrooms. 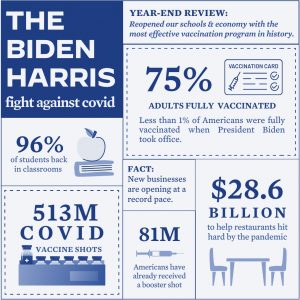 Thanks to the American Rescue Plan, the child poverty rate has been cut by almost half, from 13% to 7%.

Affordable Healthcare
The number of Americans with healthcare through the Affordable Care Act now stands at 33%, a record high. The administration also lowered copays, slashed premiums and implemented a ban on surprise billing.

The Economy
When the final numbers are in, the nation's gross domestic product is expected to see the biggest one-year jump since 1984. The stock market is booming, up 25% in Biden's first year - the Dow Jones, NASDAQ and S&P all reached record highs.

Jobs
A record 6.4 million jobs were added to the economy, the most under any president in US history.

Biden inherited a 6.4% unemployment rate in January 2021, which had fallen to 3.9% by December, with weekly unemployment claims down to the lowest since 1969. 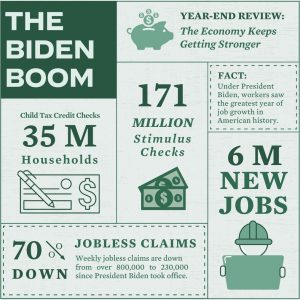 Infrastructure
Biden's signature $1.2 trillion Bipartisan Infrastructure Law, is the largest investment in repairing our nation's infrastructure in history. Passed in August, it will provide clean drinking water, update roads, airports and rail, provide funding for clean energy, and create an estimated 19 million jobs over the next ten years.

Manufacturing
Biden created the Made in America Office to direct federal dollars to US manufacturers, increasing American production, supply chains, good-paying union jobs, and providing the most significant boost to domestic manufacturing in almost 70 years.

Global Relations
President Biden has restored global alliances and America's leadership on the international stage and ended the United State's "longest war" in Afghanistan. For the first time in a generation, Americans are not deployed overseas in an ongoing war.

The US also donated and delivered nearly 400 million vaccines to developing countries. 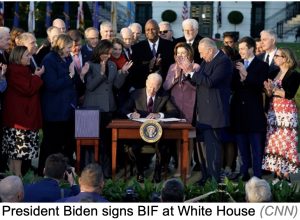 Climate Crisis
On day one of his administration, Biden rejoined the Paris Climate Agreement and joined other world leaders at COP26 in Scotland to establish historic new goals to limit global warming.

During his first year, the sale of electric vehicles doubled and the US is now deploying more wind and solar energy than ever before, addressing the negative effects of legacy pollution and advancing environmental justice in underserved communities. His climate policy is also creating new, well-paying union jobs in emerging climate-related fields.

Gun Violence and Crime
The administration issued a comprehensive strategy to reduce gun-related crimes, including cracking down on gun trafficking and the proliferation of "ghost guns." The Department of Justice banned federal law enforcement from using chokeholds and “no-knock” entries.

Through the American Rescue Plan, cities were provided historic levels of funding to hire more police and invest in community programs proven to reduce crime. 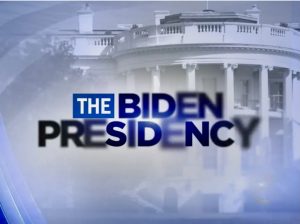 Equality
President Biden signed a Day One Executive Order on advancing equity and racial justice and a separate Executive Order to expand Diversity, Equity, Inclusion, and Accessibility across the federal government.

He set a government-wide goal of increasing the share of federal contracts to small disadvantaged businesses, including those owned by people of color, by 50% by FY25, meaning an increase of $100 billion to these firms over five years.

The administration made the largest single federal investment in indigenous communities, providing $19 million in grants to ensure the survival of indigenous languages, equity for indigenous children and $300 million in loans to indigenous-owned small businesses. Biden also restored protections for several sacred cultural sites. 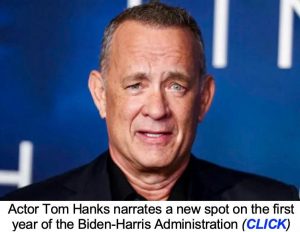 Immigration
The administration provided relief to more than 300,000 immigrants by extending the Temporary Protected Status (TPS) for Salvadorans, Haitians, Hondurans, Nicaraguans, and designating TPS for Venezuelans.

The Judiciary
Biden's confirmation rate of federal judges exceeds that of any president in 40 years. 80% of the confirmed judges are women, and 53% are people of color.

Biden’s picks for lower court judges were also confirmed at record numbers, and he appointed more Black women to the Court of Appeals than any other president.

August 14, 2017 The last day of Netroots in Atlanta, Georgia was marked by more than just the conference itself. While an impressive lineup of panels and speakers, including Senator Elizabeth...