Former Vice President Joe Biden swept all three of yesterday's St. Patrick's Day primaries, all but cinching the Democratic nomination with an estimated gain of at least 250 delegates.

Biden won decisively in Florida and Illinois by wide margins, and carried Arizona by 12 points, giving him an almost insurmountable lead in the delegate race against Bernie Sanders.

Voters and election officials also faced new challenges caused by the pandemic, with closed precincts, absent poll workers and a plethora of obstacles to voter participation. 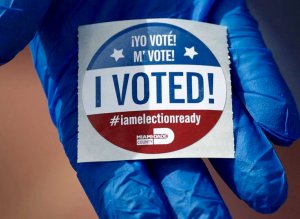 Determined Democrats, however, rallied to the ballot, surpassing 2016 turnout in Arizona and Florida. Across the board in primaries this year, turnout has increased by an average of 30% over 2016.

The Near Future
The March 17th primaries may be the last that we see for weeks, if not months, as states have begun to postpone their elections over health concerns from the coronavirus pandemic.

Ohio, which was scheduled to vote yesterday, postponed their primary after a series of chaotic battles between state officials and the courts, ending with the Governor defying a court order to proceed with the elections.

Georgia, Kentucky, Louisiana, Maryland have also delayed their primaries, and Puerto Rico's Senate has approved postponing their elections by a month.

The Democratic National Committee (DNC) is encouraging the remaining primary states, each of which controls its own election process, to use vote by mail and absentee ballot measures, and where early in-person voting is still permitted, expand days and hours to reduce lines.

The DNC is also working closely with state parties on their delegate selection process and calendar, which has also been disrupted by the pandemic. 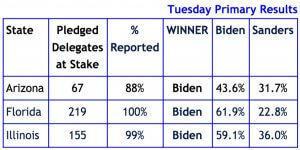 The Party's Future
In a live stream from his home in Wilmington, Delaware, a calm and confident Joe Biden gave a victory speech that reassured Americans looking for leadership and comfort.

In remarks, Biden focused not on the primary victories, but on uniting during the crisis.

It's moments like these that we need to put politics aside and work together as Americans. The coronavirus does not care if you are Democrat or Republican. It will not discriminate based on national origin, your race or zip code. It will touch people in positions of power, as well as the most vulnerable in our society. We are all in this together."

Biden also praised Sanders and his supporters for "bring a remarkable passion and tenacity" to the campaign and the issues, and who, "together, have shifted the fundamental conversation in this country." 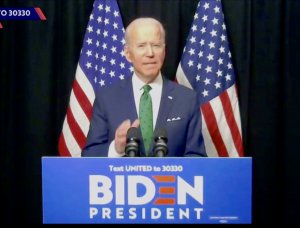 Biden: "In times of crisis, Americans have always stepped up"

Bernie Sanders did not speak Tuesday night, but in a Wednesday email to supporters, his Campaign Manager Faiz Shakir acknowledged there was "no sugarcoating" the results, and that Sanders "is going to be having conversations with supporters to assess his campaign."

Sanders' campaign denied reports that he was dropping out, calling the rumors "absolutely false." The Vermont Senator is planning to head home this evening after he votes on the Senate relief package.

The US Senate is expected to pass a multi-billion dollar relief package today, which includes provisions for free COVID-19 testing and paid emergency leave. The House passed its coronavirus emergency bill on Monday.

For the vote itself, Majority Leader Mitch McConnell instructed senators to come in to the gallery and vote, then exit -- abiding by the social-distancing guidelines set out by the Capitol physician.