The second night of the second Democratic presidential debate proved to be an intense and often combative event that served as a forum for individual contenders to stand in the limelight - potentially for the last time - while taking shots at front runner Joe Biden.

The former Vice President, however, successfully fended off the attacks, as evident in this morning's post-debate poll. 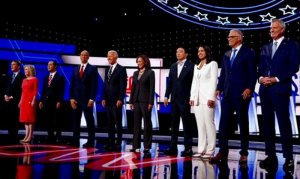 Round Two: The Highlights
As with first night, healthcare was the subject from the outset, with a heated debate pitting Obamacare vs Medicare for All.

An energized Senator Michael Bennet (CO), the only one on the stage other than Biden who does not support a Medicare for All plan, said, "I believe we should finish the job we started with the Affordable Care Act with a public option that gives everybody in this audience the chance to pick for their family.

Bennet: That is totally different from the plan that Senator Warren and Senator Sanders and Senator Harris have proposed ...We need to be honest about what's in that plan. It bans employer-based insurance and taxes the middle class to the tune of $30 trillion."

Harris, who at points seem to struggle to defend her plan, said, "We cannot keep with the Republican talking points on this."

Biden: "This is not a Republican talking point. The Republicans are trying to kill Obamacare. Obamacare took care of 20 million people right off the bat, 100 million people with pre-existing conditions. And in fact, what we got is a public option that, in fact, would allow anybody to buy in...And if they don't have any money, they'll get in free. So this idea is a bunch of malarkey." 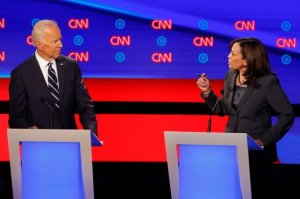 Commentator Jake Tapper pitted Biden and Harris against each other again on the issue of busing and integration of America's public schools in the 1970's.

Biden: "When Senator Harris was attorney general for eight years in the state of California, there were two of the most segregated school districts in the country, in Los Angeles and in San Francisco."

Biden went on to attack Harris on a scandal during her time as San Francisco AG when evidence tainted by a lab technician was not revealed, causing 1,000 cases to be overturned. "Secondly, she also was in a situation where she had a police department when she was there that, in fact, was abusing people's rights...Along came a federal judge and said enough, enough. And he freed 1,000 of these people. If you doubt me, google 1,000 prisoners freed, Kamala Harris." 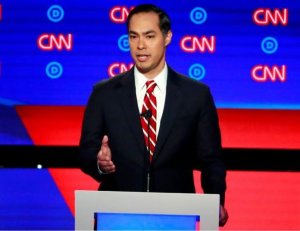 Harris defended her "work that has received national recognition for what has been the important work of reforming a criminal justice system and cleaning up the consequences of the bills that you passed when you were in the United States Senate for decades."

Former HUD Secretary Julian Castro, credited with another strong performance, went after Biden for opposing decriminalization of migrant border crossings, while taking a shot at the Obama administration polices, under which there were large numbers of deportations.

"Mr. Vice President, it looks like one of us has learned the lessons of the past and one of us hasn't...The only way we can guarantee that these kind of family separations don't happen in the future is we need to repeal this law. What we need are politicians that actually have some guts on this issue."

Biden: "I have guts enough to say his plan doesn't make sense."

Biden was prepared, attacking Booker on his record as Mayor. "In 2007 you became mayor and ...went out and you hired Rudy Giuliani's guy...and engaged in stop-and-frisk. You had 75% of those stops reviewed as illegal... three times as many African-American kids were caught in that chain and caught up. The Justice Department came after you...there was nothing done for the entire eight years he was mayor, there was nothing done to deal with the police department that was corrupt."

Booker: "Mr. Vice President, there's a saying in my community, you're dipping into the Kool-Aid and you don't even know the flavor. You need to come to the city of Newark and see the reforms that we put in place. 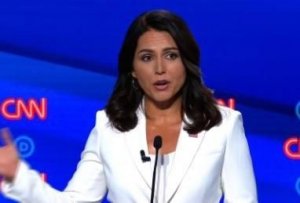 New York Mayor Bill de Blasio's most notable time on the debate stage centered on the death of Eric Garner five years ago, killed in a video'd chokehold by NYC police officer Daniel Pantaleo, who still remains on the force. "I know the Garner family," de Blasio said. "They've gone through extraordinary pain. They are waiting for justice and are going to get justice. There's finally going to be justice."

California Senator Kamala Harris also endured some assaults, including from Hawaii Congresswoman Tulsi Gabbard: "I want to bring the conversation back to the broken Criminal Justice system that is disproportionately, negatively impacting black and brown people all across this country today."

Gabbard: "Senator Harris says she's proud of her record as a prosecutor ... but I am deeply concerned about this record. There are too many examples to cite, but she put over 1,500 people in jail for marijuana violations and laughed about it when she was asked if she ever smoked marijuana... she kept people in prison beyond their sentences to use them as cheap labor for the state of California ...and she fought to keep cash bail system in place, that impacts poor people in the worst kind of way."

Harris: "As the elected Attorney General of California, I did the work of significantly reforming the criminal justice system of a state of 40 million people which became a national model for the work that needs to be done. And I am proud of that work." 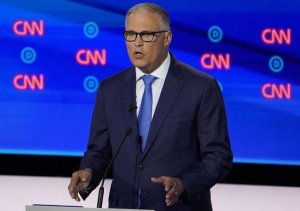 Entrepreneur Andrew Yang, in one of several lines that earned him the most new twitter followers of the night, said "I speak for just about everyone watching when I say that I would trust just about anyone on this stage much more than I trust our current president on matters of criminal justice. We cannot tear each other down. We have to focus on beating Donald Trump in 2020."

On climate change, Governor Jay Inslee, who was able to effectively point to his advancements in leading Washington State throughout the evening, led the charge.

"We have to act now. Look, climate change is not a singular issue, it is all the issues that we Democrats care about. It is health. It is national security. It is our economy. And we know this, middle ground solutions, like the vice president has proposed, or sort of middling average-sized things, are not going to save us.

Biden responded, "There is no middle ground about my plan," pointing out that he helped negotiate the Paris Climate Accord which, as president, he would immediately rejoin.

New York Senator Kirsten Gillibrand also came prepared to hit Biden, bringing up a 1981 op-ed in which Biden said expanding tax credits for child care would cause the "deterioration of the family." Framing it as an attack on women working outside of the home, Gillibrand asked, "Am I serving in Congress resulting in the deterioration of the family?"

Biden effectively countered the misrepresentation, adding that both his late and his current wife worked outside the home, and that he'd worked on multiple efforts to benefit women's rights. "I wrote the Violence Against Women Act. Lilly Ledbetter (Act). You came to Syracuse University with me and said it was wonderful...I don't know what's happened except that you're now running for president." 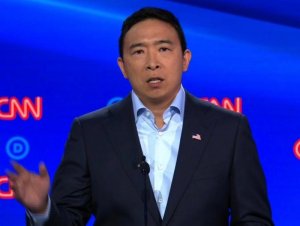 Andrew Yang: "The opposite of Donald Trump is an Asian man who likes math"

In the end, the second democratic presidential debate did not move the needle enough for the second tier contenders struggling to stay in the game.

Winnowing The Field
The candidates have the August recess to raise the stakes before the third Democratic primary debate September 12th and 13th in Houston, Texas, hosted by ABC News in partnership with Univision.

The field, however, is expected to be considerably smaller as the debate requirements set by the Democratic National Committee (DNC) double, and require meeting both the polling and fundraising thresholds.

At this point only eight of the 25 contenders have met the September requirements: Biden, Booker, Buttigieg, Harris, Klobuchar, O'Rourke, Sanders and Warren. Waiting in the wings: Castro and Yang, who have met the donor requirement, but not polling.