June 6, 2017
President Trump's decision to withdraw the United States - the world's largest producer of carbon emmissions and, until now, a global leader in the fight for climate change - from the Paris Climate Accord set off an unprecedented global reaction - even for this administration.

The list of objectors was so immediate and adverse - from world leaders, lawmakers, scientists and corporate CEOs, to religious organizations and environmentists, that we felt they were worth recognizing.

In an open letter to the President, 246 "US Climate Mayors," representing 56 million people, committed "to adopt, honor and uphold Paris Climate Agreement goals," ending with "The world cannot wait - and neither will we." 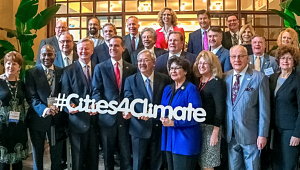 On June 1st, the same day as Trump's withdrawal, Governors Jerry Brown (California), Jay Inslee (Washington) and Andrew Cuomo (New York)
announced the formation of the United States Climate Alliance, a group of state governments committed to upholding the objectives of the Paris Agreement within their borders.

National and international business and industry leaders also responded the same day with an open letter to the President in the Wall Street Journal.

Then there are the countless organizations like the Sierra Club and Natural Resources Defense Council, as well as individual Members of Congress who have condemened the decision.

A new Washington Post-ABC poll (June 2-4, sample 527, error margin %5) shows that,  by a 2-to-1 margin, Americans oppose Trump's decision, with a majority saying the move will "hurt US leadership in the world."

Former New York City Mayor and mulitmillionaire Michael Bloomberg has pledged $15 million toward America's financial commitment in the Paris climate accord, stating " Americans are not walking away from the Paris climate agreement."

March 15, 2019 By demand! Every few months we like to do a humor roundup, as a reminder that there are still reasons to laugh. We are overdue. Seth Meyers “Paul Manafort was sentenced to an...