Saturday night the annual White House Correspondents' Association Dinner delivered its usual fanfare, roasting the best and the brightest of journalism, and the people they cover -- with a little bit of Hollywood and political elite thrown in. 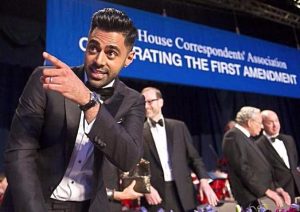 The evening is also traditionally when the President gets to take a comedic shot at the press corps and other political figures, but President Trump declined - making him the first president in 36 years not to attend the dinner (Ronald Reagan, who was recovering from being shot, was the last to miss it).

The Daily Show's Hasan Minhaj, who hosted the event, wasted no time in opening up the flood gates on jokes about the absent Commander in Chief.

On Trump
"I get it, we gotta address the elephant that's not in the room. The leader of our country is not here. And that's because he lives in Moscow. It's a very long flight. As for the other guy, I think he's in Pennsylvania because he can't take a joke."

"Donald Trump is liar-in-chief. Remember, you guys are public enemy number one. You are his biggest enemy. Journalists, ISIS, normal-length ties." 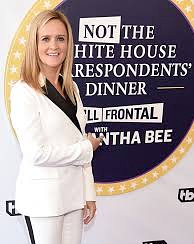 "I'd like to thank Jeff Mason and the White House Correspondents' Association for having me. I would say it is an honor to be here, but that would be an alternative fact. It is not," Minhaj joked. "No one wanted to do this. So of course, it lands in the hands of an immigrant. That's how it always goes down."

"For the longest time, I was considered the worst president of all time. That has changed. I needed eight years, a catastrophic flood, a war built on a lie, and an economic disaster. The new guy only needed 100 days. He is widely considered the worst president of all time. I came in second. I'm fine with that. No one remembers second place. . . I'm the Martin Van Buren of the 21st century!" 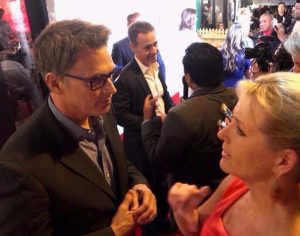 Other celebs combined the weekend's festivities with activism, lobbying lawmakers on issues, including opposition to funding cuts to the National Endowment of the Arts.

Some also participated in Saturday's "People's Climate March" which drew an estimated 200,000 to the Capitol Mall Saturday.

All in all, a good weekend for those behind, and in front, of the camera.

June 15, 2020 In an historic win for supporters of LGBTQ rights, the Supreme Court of the United States (SCOTUS), released its decision in Bostock v. Clayton County this morning, ruling that...

DemDaily: The Status of the Presidency 5:00am

At 2:50am this morning Donald J. Trump took the stage. At 5:00am the four remaining states