May 2, 2016
Obama rocked the house at Saturday night's annual White House Correspondent's Dinner. The event gathers the best and brightest of the press corps, and is the one time when Hollywood comes to DC for a party. 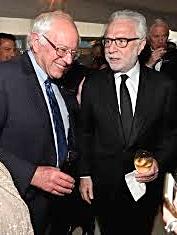 Bernie Sanders, as the only WH hopeful present, basked in the limelight. VP Joe Biden, Secretary of State John Kerry, former House Speaker Newt Gingrich and former NYC Mayor Michael Bloomberg, along with a small contingent of Senate and House Members, were also scattered amongst the elite.

The evening is the President's traditional roast of the press corps and other political figures and Obama, who is considered one of history's funniest Presidents, did not disappoint on his final victory lap. For those who missed it, our picks from --

"Kendall Jenner is also here. And we had a chance to meet her backstage. She seems like a very nice, young woman. I'm not exactly sure what she does, but I'm told that my twitter mentions are about to go through the roof."

Obama to Spotlight actors Rachel McAdams, Mark Ruffalo and Liev Schreiber, "As you know, Spotlight is a film about investigative journalists with the resources and the autonomy to chase down the truth & hold the powerful accountable. Best fantasy film since Star Wars."

"The end of the republic has never looked better ... Eight years ago I said it was time to change the tone of our politics. In hindsight, I clearly should have been more specific."

On the GOP: GOP chairman Reince Priebus is here as well. Glad to see that you feel you have earned a night off. Congratulations on all your success, the Republican party, the nomination process. It's all going great. Keep it up."

"Guests were asked to check whether they wanted steak or fish. But instead, a whole bunch of you wrote in Paul Ryan. That's not an option people. Steak or fish. You may not like steak or fish, but that's your choice."

"We've got Republican senators Tim Scott and Cory Gardner. They are in the house, which reminds me ... security bar the doors. Judge Merrick Garland come on out. We are going to do this right here. Right now."

"Hillary trying appeal to young voters is a little bit like your relative who just signed up for Facebook. 'Dear America, did you get my poke? Is it appearing on your wall? I'm not sure I'm using this right. Love, Aunt Hillary."

"I am hurt though, Bernie, that you have been distancing yourself from me. I mean that's just not something that you do to your comrade." 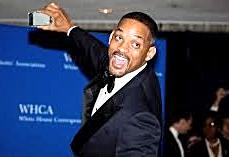 Obama on Obama
"Somehow, despite the churn, in my final year my approval ratings keep going up. The last time I was this high I was trying to decide on my major."

"... while in England I did have lunch with her Majesty the Queen, took in a performance of Shakespeare, hit the links with David Cameron. Just in case anyone was debating whether I am black enough, I think that settles the debate."

"My eighth and final appearance at this unique event. And I am excited. If this material works well, I'm going to use it at Goldman Sachs next year. Earn me some serious Tubmans. That's right."

"You might have heard that someone jumped the White House fence last week, but I have to give the Secret Service credit. They found Michelle and brought her back. She's safe back at home now. It's only nine more months, baby. Settle down." 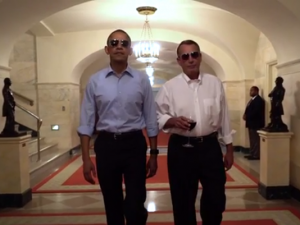 One of highlights was the pre-taped "Couch Commander" video with former GOP Speaker John Boehner providing retirement advice to Obama as they stroll through the White House in Ray-Bans, shed tears over Toy Story, and hint at indulging in forbidden cigarettes (Obama quit when he ran for POTUS).

"You want one? Hmm?" asks Boehner.

On Donald Trump and his no-show at the dinner: "You've got a room full of reporters, celebrities, cameras, and he says no. Is this dinner too tacky for the Donald? What could he possibly be doing instead? Is he at home, eating a Trump steak, tweeting out insults to Angela Merkel?"

"They say Donald lacks the foreign policy experience to be president. But in fairness, he has spent years meeting with leaders from around the world: Miss Sweden, Miss Argentina, Miss Azerbaijan." 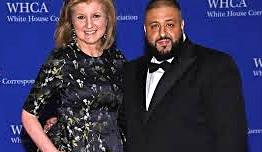 "And there is one area where Donald's experience could be invaluable and that's closing Guantanamo because Trump knows a thing or two about running waterfront properties into the ground."

To the press: "I don't want to spend too much time on The Donald. Following your lead, I want to show some restraint ... Ha. I hope you all are proud of yourselves. The guy wanted to give his hotel business a boost and now we are praying that Cleveland makes it through July."

On Ted Cruz: "Ted had a tough week. He went to Indiana. Hoosier country. Stood on a basketball court and called the hoop a basketball ring. What else is in his lexicon? Baseball sticks.Football hats.But sure, I'm the foreign one."

"Man, everybody hates Ted Cruz. Even O.J. Simpson said, That guy is just hard to like." 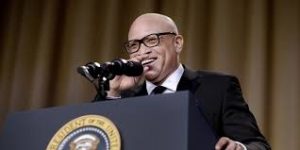 Larry Wilmore's racially tinged follow-up to Obama was considered either brilliant or a bomb, depending on the reviewer.

He nailed the news outlets with "Welcome to Negro Night here in Washington - or as Fox News will report, Two Thugs Disrupt Elegant Dinner in DC," and "C-SPAN is carrying this show live, which is ironic because most of their viewers aren't."

Wilmore on Al Sharpton supporting Hillary Clinton: "You don't put a relaxer in your hair for 40 years and not feel the Bern."

On Obama's aging in office "You came in here looking like Denzel, now you're going out looking like Grady from 'Sanford and Son.'" 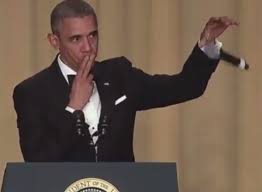 We think Wilmore still brought it home with his final tribute: ""Behind that joke is a humble appreciation for the historical implications of what your presidency means. When I was a kid I lived in a country where people couldn't accept a black quarterback ... and now to live in your time, Mr. President, when a black man can lead the entire free world."

Obama's Final: "I just have two more words to say: "Obama out."

With that he reached out and dropped the mic.

To promote your company, campaign message, initiative or call-to-action on DemList, Contact Us!