Florida is once again a battleground, with key races up and down the ballot, led by the US Senate and gubernatorial contests.

Long considered the country's largest swing state, Florida has been trending Republican, with Sunshine State voters delivering wins to Donald Trump in 2016 (48.60%) and 2020 (51.22%). 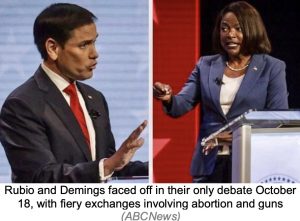 US SENATE
Two-term Republican Senator Marco Rubio is being challenged by Congresswoman Val Demings in his most serious contest since being elected in 2010.

The Cuban-American, 51, was briefly a candidate for the 2016 Republican presidential nomination before reverting to reelection for his Senate seat. He successfully fended off a challenge by Democratic nominee Patrick Murphy, 52% to 44.3%.

Demings, 65, was first elected to represent Florida's 10th Congressional District in 2016 and was reelected in 2020 with 63.6% in the Orlando-based seat. She previously spent 27 years with the Orlando Police Department, including the last four as Chief, the first woman to hold the position.

A member of both the House Intelligence and Judiciary Committees, Demings gained national recognition as one of the House managers in former President Donald Trump's first impeachment trial. She was also on Joe Biden's shortlist as a potential vice-presidential pick in 2020. 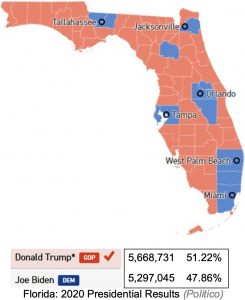 Demings had raised $64.7 million with $6.65 million cash on hand. She is among the largest beneficiaries of online fundraising, having brought in over $7.8 million on ActBlue in August alone, the most of any single candidate.

Crist, who served as the Republican Governor of Florida from 2007 to 2011, has served in Congress as a Democrat since being elected in 2016. He won the August 23 Democratic nomination with 60% to state Agriculture Commissioner Nikki Fried's 35.1%.

Fundraising: As of September 23, 2002, DeSantis and his state-level PAC had raised close to $181 million with $108 million cash on hand -- the most raised in a gubernatorial campaign in history. Crist had raised $26 million with roughly $5 million on hand.

Democrats hope that the issue of abortion can help close the gap in the Senate, gubernatorial and down-ballot races. A September 18-25, 2022 Siena College/Spectrum News survey showed 57% of Florida voters opposed the Supreme Court's decision to overturn Roe v. Wade, including 65% of women and 48% of men. 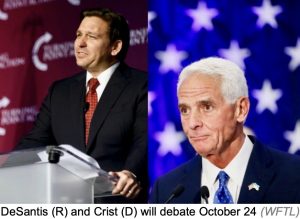 Despite abortion’s protected status in Florida, in April DeSantis signed into law a ban on abortions after 15 weeks. The ban is in place while it makes its way through challenges in the courts.

Rubio is a co-sponsor of Senator Lindsey Graham's bill that would ban abortions after 15 weeks of pregnancy nationwide.

December 4, 2019 The House Judiciary Committee today began the next stage of the impeachment proceedings against President Donald Trump. The hearings followed the conclusion of the House...