The last week has witnessed a nationwide uprising on a level not seen since the 1968 riots that followed the death of Martin Luther King, Jr. The protests, like those five decades ago, are grounded in a visceral rebellion against racism and oppression. 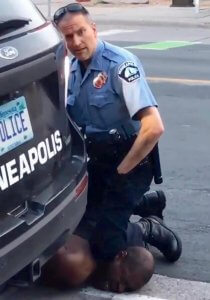 The crisis, fueled by the actions of a dictatorial President, cruelly builds on months of fear and uncertainty by Americans in fighting the unprecedented novel coronavirus pandemic.

It may also be a turning point for a country pushed to the brink of division, and forced to look at itself in the mirror to see what it has become, and what it represents.

May 25th, Monday
In Minneapolis, Minnesota, a 46-year old, unarmed African American man, George Floyd, was arrested for allegedly passing a counterfeit $20 bill. After being handcuffed, Floyd was pinned facedown on the ground by Derek Chauvin, a white police officer, who continued to kneel on Floyd's neck for almost nine minutes, despite Floyd's repeated cries of "I can't breathe."

Bystanders' pleas to release Floyd, were ignored by Chauvin and three other officers who participated in the arrest, resulting in Floyd losing consciousness and dying.

The tragedy, which was caught on video, went viral, setting off furor and frustration across the country.

One out of every 1,000 black men and boys will be killed in encounters with police. That compares to every 39 white men and boys out of 100,000.

May 26th, Tuesday
Minneapolis police chief Medaria Arradondo fired all four officers and called for an FBI investigation after video contradicted their account of the arrest. 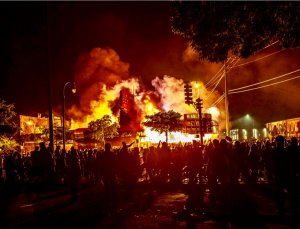 Hundreds of demonstrators swarmed the streets Tuesday night, calling for the officers to be charged with murder. The police precinct and vehicles were vandalized with graffietti.

May 27th, Wednesday
Protests continued in Minneapolis, where officers used tear gas and fired rubber bullets into the crowd as some escalated to setting businesses on fires and looting.

May 29th, Friday
In Minnesota, Derek Chauvin, 44, the officer who pinned down George Floyd, was arrested and charged with third-degree murder and second-degree manslaughter, which carry a combined maximum 35-year sentence. 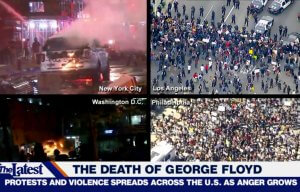 In Atlanta, hundreds of demonstrators smashed windows and painted graffiti on CNN's headquarter building. In Brooklyn and Lower Manhattan, thousands marched while smaller, violent confrontations  left police officers and demonstrators injured. In Detroit, Michigan a 21-year-old man was killed as he sat in a car during a riot.

He was quoting a white Miami police chief describing his "get tough" policy on crime during 1967 civil rights protests. The post prompted a warning flag by twitter for its advocation of violence on social media.

Friday night, in Washington, DC, the mass crowds protesting outside the White House prompted the Secret Service to temporarily lock down the building and move President Trump, Melania and their son Barron to an underground bunker. 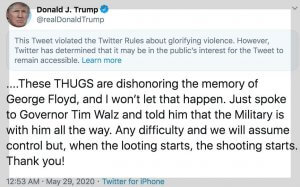 In Indianapolis, one person was killed and three others injured after shots were fired at demonstrators. In St. Louis, a man was killed after protesters blocked the interstate and set fires to vehicles. In Chicago, six people were shot and one was killed Saturday night.

In Washington, DC, President Trump taunted hundreds of demonstrators outside the White House, threatening to unleash "the most vicious dogs, and the most ominous weapons, I have ever seen."

The DC National Guard was called in to control rising violence as protest organizers implored angry marchers to remain peaceful. 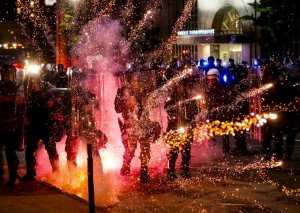 Attorney General William Barr said the violence appeared to be driven by "anarchistic and far-left extremists, using Antifa-like tactics, many of whom travel from out of state to promote the violence."

May 31st, Sunday
Peaceful protests continued, with now hundreds of thousands of people demonstrating in cities nationwide, and the National Guard deployed in more than two dozen states.

Acts of violence and vandalism continued to erupt, however, with The Associated Press reporting that at least 4,400 people have been arrested.

In Louisville, a local restaurant owner and bystander was killed in a late night exchange of fire between police officers, National Guard troops and protestors who were demonstrating after the curfew. By contrast, In Queens, New York, police officers joined protestors in kneeling in prayer during a march calling for justice for George Floyd.

More than 60 million residents of U.S. cities have been placed under curfews in recent days, affecting people in more than 200 U.S. cities and at least 27 states

June 1st, Monday
In Minneapolis, George Floyd's family released the results of an independent autopsy that found his death was homicide, caused by asphyxia and loss of blood flow to the brain. It challenges the official Hennepin County Medical Examiner report which had found "no physical findings" to support such a conclusion. 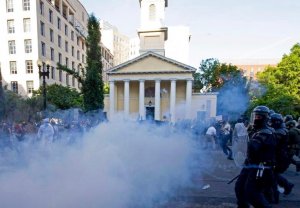 In Washington, DC, in a private conference call and angry diatribe with America's governors, President Trump railed against the protestors as "terrorists," and demanded that governors "dominate" and prosecute individuals or "they're going to run over you, you're going to look like a bunch of jerks." "Most of you are weak," Trump said.

In an afternoon rose garden speech, Trump declared himself "your president of law and order," and vowed to use the military if widespread civil unrest isn't quelled.

Hours later, in a defiant gesture, Trump decided to stage a photo-opportunity at St. John's, the historic "Church of Presidents" that lies just across Lafayette Park from the White House, and which was damaged in a protest fire Sunday.

In order to clear a path through peaceful protestors in the park, law enforcement was forced to use tear gas, flash grenades and rubber bullets, so that Trump could get a photo holding up a bible. 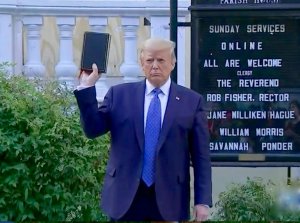 DC Episcopal Bishop Mariann Edgar Budde said she was "outraged" over Trump's unannounced visit. "The President did not pray when he came to St. John's, nor...did he acknowledge the agony of our country right now. And in particular, that of the people of color in our nation...who are rightfully demanding an end to 400 years of systemic racism and white supremacy in our country."

Bishop Budde added, "Everything he has said and done is to inflame violence. We need moral leadership, and he's done everything to divide us."

June 2nd, Tuesday
In Philadelphia, Pennsylvania, which has witnessed three days of protests, presumptive Democratic presidential nominee Joe Biden spoke passionately to the country and to the multiple crises at hand. In a ten-minute video, the former Vice President condemned Trump's "blinding ego" and threats against the American people, saying, "we are in a battle for the soul of this nation. Who we are. What we believe. And maybe most important - who we want to be."

Of George Floyd's last words, "I can't breathe. I can't breathe," Biden said "They didn't die with him. They're still being heard. They're echoing across this nation. They speak to a nation where too often just the color of your skin puts your life at risk...where more than 100,000 people have lost their lives to a virus - and 40 million Americans have filed for unemployment...And they speak to a nation where every day millions of people - not at the moment of losing their life - but in the course of living their life - are saying to themselves, "'I can't breathe.'" 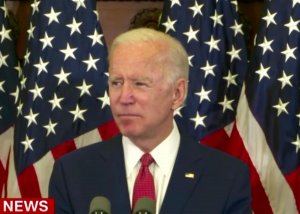 Dr. King, Biden said, "told us that though the arc of a moral universe is long, it bends toward justice. And we know we can bend it - because we have. We have to believe that still. That is our purpose. It's been our purpose from the beginning."

Our DemList Weekly Convention Roundup on information, events, logistics and happenings at the Democratic Convention