The playoffs for Major League Baseball's World Series, first held in 1903, began this week, marking one of the most excited and anticipated months in American sports.

The MLB
Major League Baseball is comprised of two leagues - American and National, with three divisions in each - West, Cental and East, and four to six teams in each division. The regular season runs from April to the end of September, with each club playing 162 games. 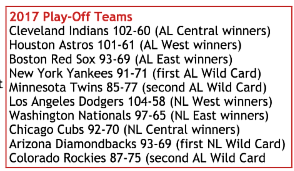 Ten teams go to the playoffs - five each from the American and National Leagues. The playoffs for each league consist of a one-game playoff between two Wild Card teams, two best-of-five Division Series playoffs (DS) featuring the wild-card winner and the team with the best record in each league, and finally the best-of-seven League Championship Series (LCS).

Wild Card
Wild Card teams are the two best records in each league, after the division winners.  Each wild card game is a single game elimination contest,  with the winners advancing to face the top seeds in each league. In the American League (Oct. 3), the New York Yankees beat the Minnesota Twins 8-4 and, in the National League (Oct. 4), the Arizona Diamondbacks overcame the Colorado Rockies 11-8.

Playoffs Bracket as of 10/5

Where will the World Series be held?
The world series games are held in the home cities of the final two competing teams - with the first two "home" games of the seven-game series going to the team with the best regular season record.

If both teams are tied with identical records, then the home field advantage goes to the team with the superior "head-to-head" record against the other during regular season interleague play.  The winner of the previous world series is automatically given the home field.

The Countdown to the 2016 Presidential, just over one year away, has begun! For a one-stop, national and state-by-state run-down on important dates, Sign-Up for access to the free DemList...