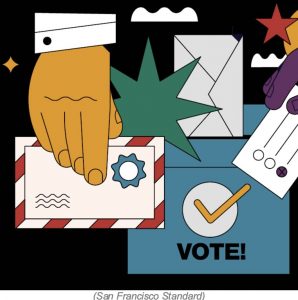 In a year when control of the US House and Senate are at stake, major support or opposition to a ballot measure can help drive voter turnout and impact the outcome of other elections on the ticket.

While there are numerous types of measures, ballot initiatives, measures driven by citizens, have been a part of our electoral process for 120 years -- as a form of direct democracy and as an avenue for checking legislative powers.

Today, twenty-six states and DC grant their citizens amendment, statute and/or veto referendum power through that process. All states, with the exception of Delaware, require voters to ratify proposed state constitutional amendments.

Types of Ballot Measures
Measures come primarily in the form of citizen initiatives or referendums, or through legislative referral.

Citizen Initiatives
* Citizen Initiated Constitutional Amendment (CICA) or State Statute (CISS): Also called a direct initiative, it is when a measure is put directly to a popular vote after being submitted by citizen petition. 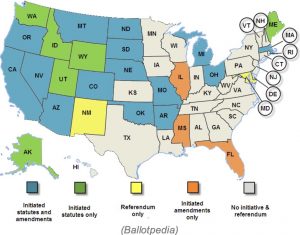 * Veto Referendum (VR): Also called a citizen or popular referendum, it allows voters to approve or repeal an act of their state's legislature through citizen petition.

*  Bond Issue (BI): When a state government or a local unit of government places a question before the voters, asking them to approve or deny additional proposed spending. 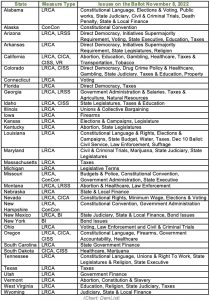 2022 Measures
Historically, major wedge or publicly controversial initiatives are usually held in on-election (even) years when congressional and more electoral seats are up. 2022 is no exception.

We see that positively in Illinois, where voters are expected to enshrine collective bargaining rights for unions in their constitution, and in Nevada, where they hope to raise the minimum wage and pass an equal rights amendment.

Oregon is proposing an increase in gun safety requirements and, along with Tennessee and Vermont, is expected to amend antiquated constitutional language that allows for some form of slavery and involuntary servitude.

New Mexico will vote on increasing early childhood education funding, and efforts to expand legalized Marijuana use are on the ballot in Maryland and South Dakota.

Unfortunately, the initiative process is also being used effectively by lawmakers and conservative leaders in red and purple states to deny voters of their most fundamental voting, civil and personal rights.

In the wake of the Supreme Court's decision overturning Roe v. Wade, at least five statewide ballot measures addressing abortion will be on the ballot in the general election. In the interim, Kansas is poised to pass an August 2 primary constitutional amendment to ban abortion and public abortion funding. A similar amendment will go before the voters in Kentucky in November, along with one criminalizing abortion providers and patients in Montana. 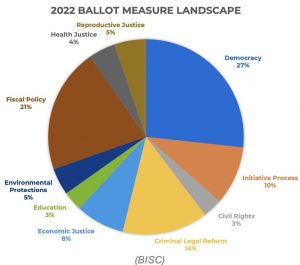 There are also a record number of democracy issues on the ballot. Of those, six direct attacks on the initiative process have qualified for November, including in Arizona and Arkansas, to make it harder to pass initiatives or to more easily reverse voter-approved decisions.

January 17, 2023 The campaign cycle is now underway, with incumbents and candidates already announcing their intentions for the 2024 Senate elections. While Democrats prevailed against political...

April 22, 2022  Mask Mandates have been lifted nationwide across the country’s transportation systems, including on planes, trains, and automobiles. On April 18, Florida US District Court...