The Arizona US Senate race is officially on with the announcement of Congressman Ruben Gallego (D) on Monday that he will challenge freshman Senator Kyrsten Sinema in 2024.

The entry of the progressive four-term House member comes a month after Sinema officially left the Democratic party to become an Independent. The developments set up a dramatic and unprecedented dynamic in the critical 2024 battleground state. 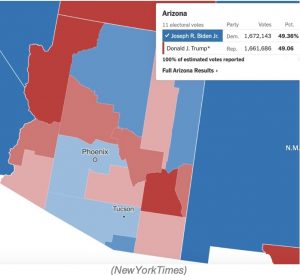 Arizona was long considered a red state, voting only once for a Democrat --- Bill Ciinton in 1996 -- over seven decades of presidential elections. In recent years, however, the state has shifted away from the GOP, with almost 2/3 of registered voters in 2022 identifying as Unaffiliated or Democratic.

Democrats successfully flipped Arizona's US Senate seats in 2018 and 2020, and Joe Biden won the state's 11 electoral votes in 2020 by just under 11,000 votes -- cementing the Grand Canyon State's status as a key battleground.

Sinema, Arizona's senior Senator, was elected to the Senate in 2018, flipping the seat vacated by retiring GOP Senator Jeff Flake. Sinema, a three-term Congresswoman, defeated Congresswoman and retired US Air Force Colonel Martha McSally, 50% to 47.6%. A former criminal defense attorney with an MBA and PhD, Sinema was the first elected female Senator from Arizona, and the first open bisexual elected to the US Senate. 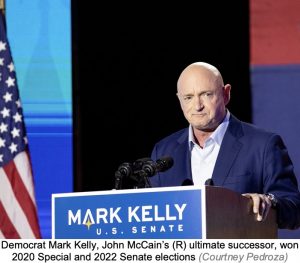 In the November 3, 2020 election to fill the remainder of McCain's term, McSally lost 48.82% to 51.17% to Democrat Mark Kelly, a former astronaut and husband of former Arizona Congresswoman Gabby Giffords.

In his reelection to a full term in 2022, Kelly successfully defended his seat against conservative Trump-endorsed challenger Blake Masters by 4.9%.

Democrats also flipped the open Arizona Governor's mansion in 2022 with the victory of Democratic Secretary of State Katie Hobbs over former Fox news anchor and Trump favorite Kari Lake (R) 50.3% to 49.6%. Hobbs had gained national attention for standing up to GOP's high-profile attempts to overturn the 2020 Arizona presidential vote.

With the elections of Secretary of State Adrian Fontes and Attorney General Kris Mayes in November, Democrats now have unified control of the state's highest executive and federal offices for the first time in 72 years. 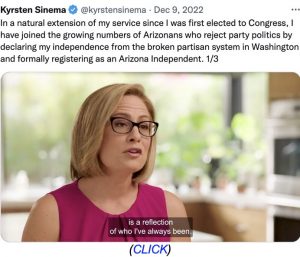 The GOP, meanwhile, still narrowly controls the legislature, where Republicans hold small majorities in the State House (31-29) and Senate (16-14).

The Dynamics
Although's Sinema declaration that registering as an independent "is a reflection of who I’ve always been" may ring true, her motives for the switch may have had more to do with political survival than ideological integrity.

Sinema's role in the Senate has been relatively unaffected, maintaining her committee assignments and caucusing with the Democrats.

However, her battle with her own state party and Democratic base, enraged over her centrist views, has been well-publicized -- calling into question whether Sinema could have withstood a Democratic primary challenge.

As an Independent, she is guaranteed a spot in the general election.

Sinema's controversial swing vote status appeals to independents and can be credited with playing a key role in negotiating bipartisan legislation over the past two years. Sinema has been touted for her achievements in negotiating the bipartisan infrastructure bill, attracting Senate GOP support for gun safety legislation, and passing increased protections for same-sex married couples. 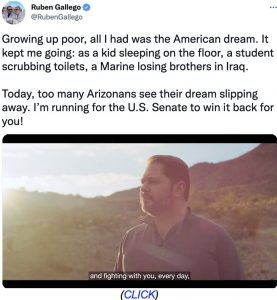 The Dilemma
Gallego’s entry into the race forces a potential faceoff between state Democrats, likely to back his candidacy, and national Democrats, who may feel the need to protect the incumbent Sinema to hold the seat and vote.

The dilemma sets up an intra-party showdown among Democrats which threatens to drain the considerable resources needed to combat the millions the GOP and outside organizations will pour into the three-way race.

With the outcome of the 2024 presidential and senate map at stake, the Democratic Senatorial Campaign Committee (DSCC) is facing the split of the Democratic base and its donors, laying the groundwork for a GOP takeover.

While no GOP candidates have announced, potential contenders include Lake, who has yet to acknowledge her 2022 gubernatorial defeat; Masters, who is "strongly considering" a repeat of his 2022 Senate bid; and former Arizona Board of Regents member Karrin Taylor Robson, the establishment Republican gubernatorial candidate whom Lake defeated in last year's primary. Jim Lamon, a solar energy executive who lost the GOP primary to Masters last year, is mulling a run.