With less than three months to go before the Iowa caucuses, former Massachusetts Governor Deval Patrick has entered the race, bringing to a total nineteen contenders in the race for the Democratic nomination.

Patrick's entry into the contest comes just days after former New York City Mayor Michael Bloomberg filed to be on the ballot in the Alabama presidential primary as a new contender.

Background
Raised largely by a single mother on the South Side of Chicago, Patrick earned a scholarship to prep school Milton Academy in Massachusetts in the eighth grade.

He went on to attend Harvard College and Law School, then worked as a law clerk for the US Court of Appeals for the Ninth Circuit. Patrick practiced law with the NAACP Legal Defense Fund before joining the Boston law firm of Hill and Barlow, where he was named a partner at age 34. 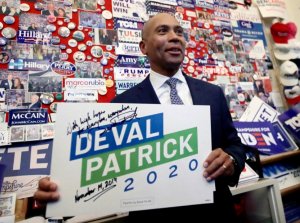 In 1997 he was appointed by a federal district court to serve as Chairman of Texaco's Equality and Fairness Task Force to implement the terms of a race discrimination settlement. He was subsequently offered a position as General Counsel of Texaco, overseeing the company's 2000 merger with Chevron.

In 2001, Patrick became the Executive Vice-President and General Counsel at The Coca-Cola Company, and from 2004 to 2006, he served on the board of directors of ACC Capital Holdings.

In 2006, Patrick became the first African American elected Governor of Massachusetts, succeeding Mitt Romney, who chose not to run for reelection. Patrick was re-elected in 2010.

Patrick is a managing director at Bain Capital and serves as the Chairman of the Board for Our Generation Speaks, which brings together young Israeli and Palestinian leaders through entrepreneurship.

2020
Patrick was expected to be an early contender in the race, but deferred because of his wife Diane's diagnosis of uterine cancer a year ago. She is now cancer-free. 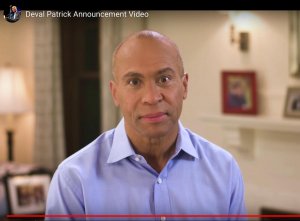 A longtime ally and friend of President Barack Obama's, Patrick was expected to inherit some of his operation, had he run earlier. Instead, he now faces building an entire fundraising and campaign operation going into the start of the presidential primary calendar.

He may be counting on geography to provide his first boost -- as New Hampshire, which holds the first primary, is adjacent to Massachusetts, where he served as a popular Governor.

Another early opportunity is presented in South Carolina, the fourth state to vote, and where a majority of primary voters are expected to be African American. At present, former Vice President Joe Biden appears to have a stronghold on that part of the electorate.

Then there is the chance that he is positioning himself as a Vice Presidential possibility in the "Veepstakes" that have yet to commence.

September 30th, 2021 The US Senate passed a continuing resolution, or stopgap measure, this afternoon to keep the government funded and open, after reaching a bipartisan deal Wednesday night. The...