16-term Tennessee Congressman Jim Cooper (D) became the latest member of Congress to announce his retirement, bringing the number of House departures to 43 going into the 2022 midterm elections. 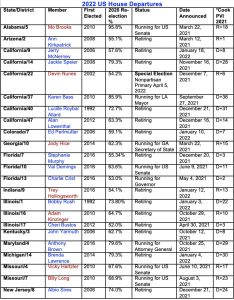 Although Langevin and McNerney would have been favored to win in their newly drawn seats under redistricting, the new Republican-gerrymandered map in Tennessee split Cooper's Nashville-based seat into three.

Despite the "wave" of Democratic departures, which Republicans claim will ensure their takeover of the US House in November, more than half of those are in seats that are still safely blue under reapportioned maps.

With roughly two-thirds of the nation’s congressional maps finalized, Republicans' overall dominance of statehouses and the redistricting process has so far been effectively countered by Democrats in states where they have control.

Regardless, Democrats are facing an uphill battle in their quest to maintain control of the US House, which they currently hold by a mere nine-seat advantage. 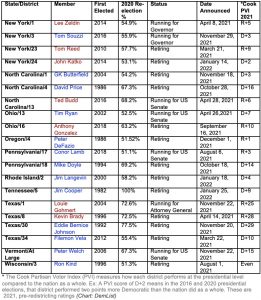 Historically, the party in the White House in off-election years suffers significant losses and frequently sees the president's opposing party gain control of one or both houses of Congress.

Midterm elections are often regarded as a referendum on the sitting president's or party's performance. With President Biden's current approval rating at 43% and Congress' at 21%, the numbers do not bode well for Democrats.