Women compose 51.9% of the American population, 53% of the voting population, and four women have announced their candidacies for President of the United States. 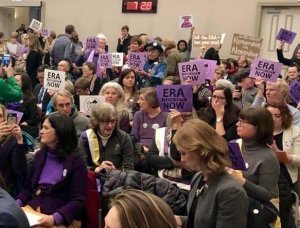 However, as we approach the 100th anniversary of the suffrage movement and passage of the 19th Amendment that guaranteed women the right to vote, the US Constitution still does not guarantee equal rights for women.

Last Friday the state of Virginia could have changed that by becoming the 38th state to ratify the Equal Rights Amendment, but a Republican-controlled subcommittee in the House of Delegates voted down the measure.

A similar resolution passed the state Senate earlier this month by a bipartisan 26-14 vote, but majority approval of both state houses is required for ratification.

Republicans hold a one-vote majority in both chambers and therefore have control of the committees. All 140 seats in the Virginia legislature are up for election this year.

"Equality of rights under the law shall not be denied or abridged by the United States or by any State on account of sex."  -- The Equal Rights Amendment

The Equal Rights Amendment (ERA) is a proposed amendment to the United States Constitution designed to guarantee equal legal rights for all American citizens regardless of sex. The goal is to end the legal distinctions between men and women in terms of divorce, property, employme nt, and other matters.

The ERA was originally written by women's suffrage pioneers Alice Paul and Crystal Eastman, and introduced in Congress for the first time in 1923.

The ERA gained momentum in the 1960s with the rise of the women's movement. In October of 1971 it was approved by the US House of Representatives and in March of 1972 by the US Senate, thereby sending it to the state legislatures for ratification. 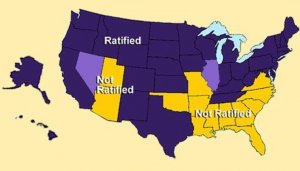 37 States have Ratified the ERA

Congress had originally set a ratification deadline of March 22, 1979, for the state legislatures to consider the ERA.

By 1977, the amendment received 35 of the necessary 38 state ratifications and had broad bipartisan support, including that of Presidents Nixon, Ford and Carter.

However, an aggressive movement by opponents, led by conservative constitutional lawyer and anti-feminist Phyllis Schlafly, halted its progress.

A number of states voted to revoke or rescind their ratifications prior to the 1979 deadline, although the question of whether a state can revoke its ratification of a federal constitutional amendment is in legal dispute.

Likewise Article V is silent regarding deadlines for the ratification of proposed amendments, but, in practice, most amendments proposed since 1917 have included a deadline.

In 1978, Congress passed and President Carter signed, a joint resolution extending the ratification deadline to June 30, 1982. However, because no additional state legislatures ratified the ERA between the 1979 and 1982 deadlines, the validity of that extension is also a matter of legal dispute.

A number of legal battles over the issue of the deadline and previous state ratifications have been waged over the years, but current efforts supporting the 38 states passage point to a 1939 decision by the US Supreme Court in Coleman v Miller. 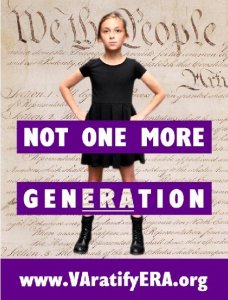 In that case the Supreme Court ruled that Congress has the final authority to determine whether, by lapse of time, a proposed constitutional amendment has lost its vitality before being ratified by enough states, and whether state ratifications are effective in light of attempts at subsequent withdrawal.

In 2013, the Library of Congress' Congressional Research Service issued a report saying that ratification deadlines are a political question and that the Supreme Court's decision in Coleman v. Miller gives Congress wide discretion in setting conditions for the ratification process.

In the current political environment and #MeToo movement, efforts to pass the ERA have been renewed, driven by a "three-state strategy" to secure the final three states necessary for ratification.

On March 22, 2017, the 45th anniversary of when Congress first submitted the ERA to the nation's state legislatures, Nevada became the 36th state to ratify the ERA, followed by Illinois in May of 2018 as the 37th.

Virginia would have been the 38th.

A 2016 poll commissioned by the ERA Coalition/Fund for Women's Equality showed 94% of Americans support constitutional equality for women, including 90% of men and 99% of 18 to 24 year olds.