Welcome to the US Senate Doug Jones! 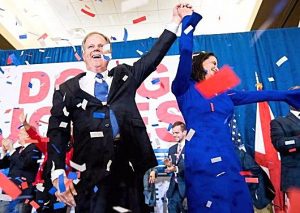 Jones: "I have always believed that the people of Alabama have more in common than divide us"

Yesterday's spectacular Democratic victory in the Special Election to fill the Senate senate vacated by Jeff Sessions was a resounding rejection of President Trump and the character of embattled Republican candidate Roy Moore.

In one of the country's most conservative states, Jones, a former federal prosecutor, beat Moore, an evangelical former State Supreme Court Justice, 50% to 48%, with write-in ballots accounting for 2%.

Moore's candidacy was already the focus of national attention for his history of bigotry and defiance, as a twice-removed Justice, in refusing to remove a statue from the rotunda of the state judicial building, and later for directing probate judges not to issue marriage certificatesto gay couples.

After the Washington Post broke a story on November 9ththat Moore had been accused of multiple allegations of predatory behavior toward teen-age girls, Republican Majority Leader Mitch McConnell and the RNC called for Moore to drop out, but then reversed itself two weeks ago and poured resources into the general election.

President Trump, who himself is accused of sexually harrassing numerous women in the past, remained a strong advocate for Moore, campaigning and tweeting on his behalf until the end - despite the public outcry and recent retaliation against sexual harrassers which was brought on, in part, by Moore's actions.

Other lawmakers, however, continued to reject Moore's candidacy, including senior Alabama US Senator Richard Shelby (R), who announced Monday that he would not be voting for Moore. 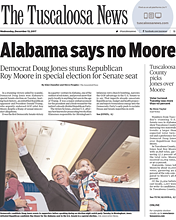 Although the race had closed to within three points in recent weeks, most still expected Moore to prevail and be sworn in to the Senate, where he was expected to face an immediate ethics investigation.  But it was the people of Alabama, and more specifically African Americans and women, who ultimately delivered for Jones.

Exit polls showed approximately 30% of the electorate was black, 96% of whom voted for Jones, a higher percentage than the 2008 and 2012 elections when Barack Obama was on the ballot.

The victory comes on the heals of the November 7th Democratic sweep and Gubernatorial victories in Virginia and New Jersey.

The win also narrows the Republican majority in the Senate to 51R-49D - and one step closer to control of the Senate for Democrats.

As of this writing, Moore had not conceded the election.

May 9, 2019 Campaign workers are the latest professionals to unionize, with numbers that, if recruited successfully, could add significantly to the ranks of organized labor. In the first...