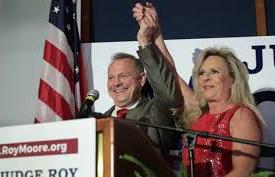 The 55% to 45% final was a crushing blow to President Trump, who won the state with 62.1% of the vote in the 2016 Presidential, and who campaigned in Alabama for Strange just days before.

The results were also a bruising defeat for the national GOP and their Majority Leader, Mitch McConnell, who were behind a $10 million ad campaign against Moore.

In the August 15th Republican primary, Moore secured 38.9%, Strange 32.8% and Congressman Mo Brooks 19.7% over four other primary candidates. Moore and Strange advanced to the run-off.

Despite the subsequent backing of Brooks and other former primary opponents, Strange was trounced on Tuesday. 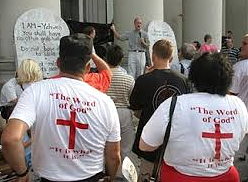 Roy Moore first earned public attention as a county judge in the 1990s when he hung a plague of the Ten Commandments on his courtroom wall.

In 2000 he won a race for the Chief Justice of the State's Supreme Court, but was removed after refusing to remove a 5,280-pound Ten Commandments monument from the rotunda of the state judicial building.

Moore ran successfully for Chief Justice again in 2012, but was suspended after directing probate judges not to issue marriage certificates to gay couples. After an unsuccessful appeal, Moore resigned in April, 2017. 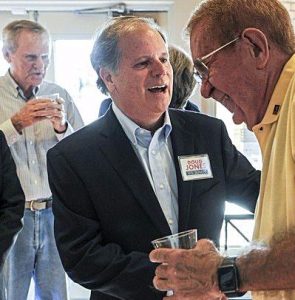 In the December general election Moore will face Doug Jones, who swept the August 15th Democratic primary with 65.6% over seven opponents.

Jones made his name as a Clinton-era US Attorney who, in 1998, re-opened and successfully prosecuted two Klansmen for the deaths of four little girls killed in the 1963 Birmingham church bombings case.

What does it Mean?
Jones' unique role in the civil rights movement presents an extreme ideological contrast to the ultra-right Moore.

An Emerson College poll taken prior to Tuesday (9/21-23) showed Moore beating Jones 52% to 30% in a hypothetical match up, but the effects of the Moore-Luther run-off have yet to be measured.

Although historically Alabama has been one of the country's more "red" states, Tuesday's results clearly show a discontent, or disconnect, with Trump and the national GOP - and it remains to be seen if centrist Republicans in the state are willing to stick with their party's nominee or defect to the Democratic alternative.

As we know, in the current political environment, much can happen in three months!  As always, DemList will keep you informed.