Bernie Sanders solidified his frontrunner status in yesterday's New Hampshire primary but the story coming out of the Granite State was not his victory but the surge, and demise, of other campaigns. 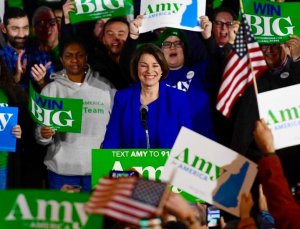 Going into New Hampshire, which Sanders won by 22% over Hillary Clinton in 2016, the Vermont Senator was leading Buttigieg by an average of 7% and Klobuchar by 17%.

However, according to Edison Media Research exit polling, almost half the New Hampshire voters made up their minds in the final three days leading up to the primary.

Approximately 75% of Klobuchar's vote came from late deciders, as did half of Buttigieg's support.

Unlike Iowa, where turnout was lower than 2016, New Hampshire exceeded both their 2008 and 2016 turnout numbers with more than 287,000 voters having gone to the polls.

Klobuchar's rise is exactly the stuff of New Hampshire, the second state contest of the Democratic presidential primary calendar, and an important early test of viability for contenders.

Historically a good showing in New Hampshire can help propel an underfunded, lesser-known candidate into the top tier, while dooming the fate of others in a crowded field. 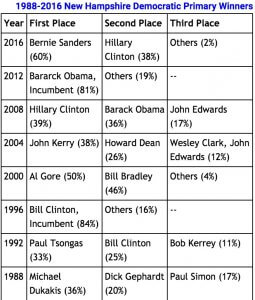 The results do not bode well for the campaigns of Elizabeth Warren and Joe Biden, who did not meet the 15% voter threshold to secure delegates. Neither, however, should be counted out as both are still in the top four in national polls.

Candidates are also going from two, predominately white states, to two upcoming contests where both brown and black voters come into play.

In an average of mid-January polls, Biden was leading Sanders in Nevada, the next primary contest, by 3%, followed by Warren 6% behind.

In the last week, however, Nevada's Culinary Union has come out in strong opposition to Sanders medicare-for-all plan, saying it would "end Culinary Healthcare."

Although the 60,000-member union has not made a primary endorsement, they are clearly weighing in ahead of Nevada's February 22nd primary. 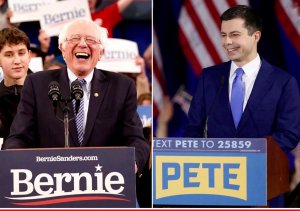 Biden, however, is focused on the February 29th South Carolina primary, where African Americans account for 60% of the vote and where he holds a substantial lead. 54 pledged delegates are at stake.

While Pete Buttigieg currently leads the delegate count, he has struggled with attracting minority voters. In a Quinnipiac University poll released Monday, Buttigieg garnered only 4% to Biden's 27% among black voters.

Former Mayor Michael Bloomberg, who did not compete in Iowa or New Hampshire, was at 22% among black voters.

The nomination fight is far from over. 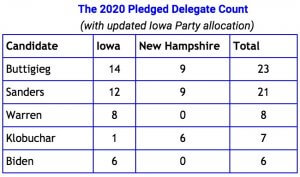 Next Up: The Nevada primary on Saturday, February 22, 2020, where 36 pledged delegates will be up for grabs.

SignUp for the Daily column on the issues, politics and players

March 17, 2022 At now less than eight months before the midterm elections, the number of members departing the US House of Representatives stands at 48. Congressmen Fred Keller (R-PA) and Ted...