With just five days until the election, candidates and the parties are saturating the airwaves nationwide in an attempt to get their message out to undecided voters.

The fight for control of Congress is driving record-breaking fundraising, by both parties, as well as outside groups which are unlimited in their spending.

Each party, however, is telling a different story.

Republicans are playing to voters' concerns about the economy, along with inflation, crime, and immigration -- all "out of control" under an unpopular President whose approval rating stands at just 42.2%. Republicans have spent over $63 on ads directly targeting Biden in the last two months alone, in addition to $50 million each on ads focused on crime and inflation.

Democratic ads are also concentrating on issues motivating voters, including threats to democracy issues, healthcare and access to reproductive rights in the wake of the Supreme Court's June decision overturning Roe v. Wade.

Since Labor Day, Democrats have spent over $103 million nationwide on ads highlighting abortion access as a key issue for the midterms. They have also spent tens of millions on character-related attacks on their opponents. 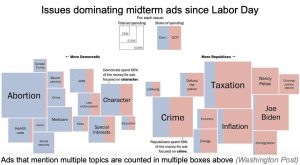 While television ads still prevail, accounting for about 51% of the ad dollars spent this cycle, millions more have been spent on social media, Google and Facebook ads.

We will find out which medium and message is most effective next Tuesday, November 8.