Melania Trump will take her place in the House Gallery tonight for the President's first State of the Union address. 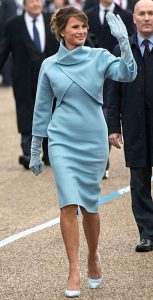 America's First Lady, notoriously very private, has been even more elusive of late, skipping her plans to join her husband in Davos for the World Economic Forum, and instead spending an unplanned weekend at Mar-a-Lago.

The trip to the "Winter White House," which cost the US taxpayers $64,000, exemplifies the conflicting public perceptions of the 47 year-old.

While outraged at her indifference to monetary waste at the expense of those below the elite "1%", voters also sympathize for a woman perceived as escaping the most recent public allegations regarding her husband's past infidelities.

In this case the alleged sexual liaison and subsequent blackmail payment involved a pornography star, and purportedly happened just months after Donald and Melania's son, now 11, was born.

Victim or Co-Conspirator?
Aside from her striking good looks, Melania has little in common with her predecessor, Michelle Obama, who may end up as America's most popular First Lady (aside from the periennial first, Eleanor Roosevelt).

By all accounts Melania, like most of the Trump family, did not expect to reach the White House, and the stress of the first year is reflected in her increasingly enigmatic presence.

The accidental First Lady may go down in history as one least known to the voters, but her true role and level of influence -- on the public or her husband -- has yet to be determined.

The second year of Trump's administration, should they both make it, may be the test.

What do we know about Melania?

The former model and third wife of Donald Trump was born Melanija Knavs in Novo Mesto, Slovenia (then part of Yugoslavia) in April 26, 1970. 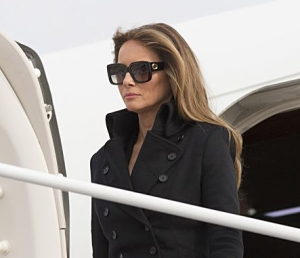 The daughter of an auto dealership manager and a clothing manufacture worker, her family moved to a Communist apartment block in Sevnica, where she attended high school. She has an older sister and a half- brother.

She attended the Secondary School of Design and Photography and studied architecture and design at the University of Ljubljana for one year before dropping out to pursue modeling full time - under the Germanized version of her name, "Melania Knauss".

She has a successful modeling career in Milan, Paris and later New York, including covers on In Style Weddings, New York Magazine, Vanity Fair, Vogue and Sports Illustrated, as well as an infamous 2000 nude feature in British CQ which she has cited as as one of her greatest achievements.

Melania met Donald Trump in September 1998 and married him in an Anglican service on January 22, 2005, at the Episcopal Church in Palm Beach. Guests included then-Senator Hillary Clinton, and former president Bill Clinton.

The first foreign-born First Lady since Louisa Adams (British-born wife of John Quincy Adams), Melania acquired her green card in 2001 and became a US citizen in 2006.

In a tradition established under Ronald Reagan, the First Lady will be joined at
the State of the Union address tonight by special guests whose stories illustrate
the success of the President's policies or agenda.

It will be Melania's first public appearance since returning from Mar-a-logo.