In another marathon session, House Impeachment Managers on Thursday laid out their arguments for the first Article of Impeachment in the third day of the impeachment trial of President Donald J. Trump.

Day Three
After walking through the facts of the case on Wednesday, House Managers outlined the specific evidence against Trump for Abuse of Power on Thursday. 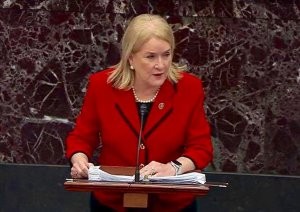 "The articles and the evidence conclusively establish that President Trump has placed his own personal, political interests first. This conduct is not America first, it is Donald Trump first." -- Jerry Nadler (D-NY)

Although the arguments, in part, rehashed previous evidence, the emphasis was on proving the constitutional violations and, as Schiff stated, to "apply the facts to the law as it pertains to the president's abuse of power."

The Managers also focused more extensively on Trump's ultimate goal of taking down his political opponent, former Vice President Joe Biden, while underscoring the fact that Biden and his son, Hunter, had been cleared of any wrongdoing.

Detractors, however, say that including the Bidens in the debate also increases chances of Republicans insisting on their testimony as witnesses, providing an opportunity to scrutinize their actions on the stand. 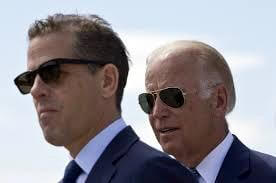 The Managers used multiple exhibits, including video of Giuliani's own words, to prove his part as the architect and executioner of the President's scheme to withhold military assistance from Ukraine in exchange for a publicly-announced investigation of the Bidens by President Zelensky.

Hakeem Jefferies (D-NY), after playing the video of Ambassador Gordon Sondland's testimony confirming the "quid-pro-quo," said, "Did President Trump abuse his power and conduct an impeachable offense? The answer is yes."

Other parts of the presentation were clearly aimed at preempting the arguments by Trump's legal team, including that of legal scholar Alan Dershowitz, which start Saturday. 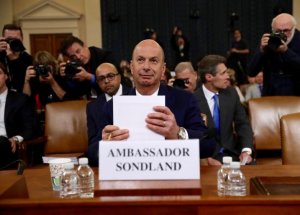 Sondland: "Was there a quid-pro-quo? The answer is yes."

Nadler played a 1988 video of Dershowitz's comments on the Clinton Impeachment, in which he said, "If you have somebody who completely corrupts the office of president, and who abuses trust, and who poses great danger to our liberty, you don't need a technical crime." In contrast, Dershowitz is now arguing that Trump can't be removed from office for abuse of power because that's not a federal crime.

In yet another condemning contradiction, Nadler showed video of Senator Lindsay Graham (R-SC), one of Trump's most vociferous defenders, speaking to impeachable offenses during Clinton's trial twenty years ago.

"What's a high crime? How about an important person hurts somebody of low means? It's not very scholarly, but I think it's the truth." -- Senator Lindsay Graham, 1999 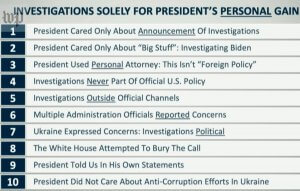 Lead Manager Adam Schiff masterfully walked through the details of ten points of evidence that Trump was motivated by his own personal gains.

"He was doing it because it helped him. For that he would sacrifice our ally and our own security." -- Adam Schiff

Next Up
The trial continues today, Friday, January 24th at 1:00pm ET. Democrats, who have close to eight hours remaining in their presentation, are expected to focus on Impeachment Article Two, Obstruction of Congress.