While the rest of Washington grappled with President Trump's declaration of national emergency in his quest for wall funding, members of the Democratic National Committee were entrenched in the business of planning his electoral demise. 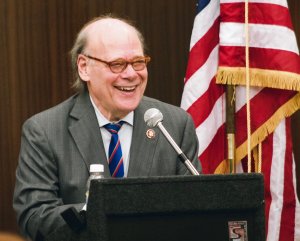 Party business, rules and bylaw, technology, constituency outreach and voter fraud were among the many topics covered during the second day of councils and caucuses at the DNC'sWinter Meeting.

There is no better figure to address the topic of voter supression than Stacey Abrams, the former Georgia gubernatorial candidate who narrowly lost to Republican Brian Kemp, who, as Georgia Secretary of State, had oversight over the election in which he was a candidate.  Thousands of votes were disqualified under Kemp's direction.

In a truly inspirational and motivational speech that spoke straight to the hearts of the 400+ DNC members from across the country and the globe, Abrams pointed to the successes from her race as an example of what can be accomplished through an effective campaign operation. 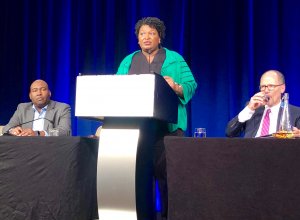 Georgia's Stacey Abrams rocked the house, "We have to work harder than them" (pic: Julia Bryan)

Despite her loss, Abrams turned more voters than any democrat in Georgia history.

The subject of the location of the Democratic Convention, scheduled for July 13-16, 2020, was also a frequent topic of speculation.  Among the final three cities - Houston, Miami and Milwaukee -- the odds are on Milwaukee.  DNC Chair Tom Perez has said a decision will be announced by the end of this month. 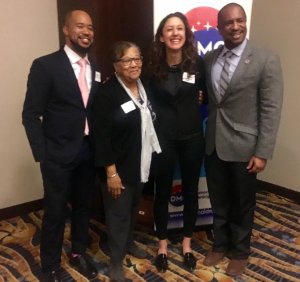 The Republican Convention will be held August 23-27, 2020 in Charlotte, North Carolina.

Tonight the DNC will host a general reception and, tomorrow, close out the Winter meeting with a general session.

Check out the public Schedule Here