DemDaily: A New Era at the AFL-CIO

DemDaily: A New Era at the AFL-CIO 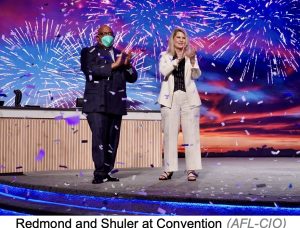 Delegates to the 29th AFL-CIO Constitutional Convention, on June 12, elected Liz Shuler to a full four-year term as President of the country's largest labor federation.

Shuler, who was elevated to the position after the unexpected passing of longtime President Richard Trumka last August, is the first woman to be formally elected as leader of the nation's labor movement.

Delegates at the quadrennial meeting, held in Philadelphia this year, also elected Fred Redmond to serve as Secretary-Treasurer, the first African American to hold the position.

They take office at a challenging, yet pivotal time for the labor movement, which has experienced a steady decline in membership over the last four decades.

The shortage in the labor market in the wake of the coronavirus and the supply chain crisis, however, has emboldened workers to exercise newly found leverage to negotiate for better wages and working conditions. 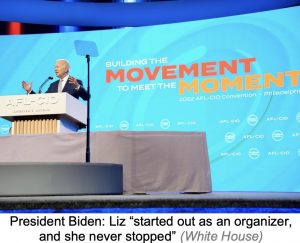 The last year has seen a major surge in labor strikes and in new union organizing efforts at companies from airlines to retail and tech, including Starbucks and Amazon.

These efforts are also resonating with the broader public. An August 2-17, 2021 Gallup Poll showed Americans' approval of labor unions at 68%, the highest since 1965.

"Sister Liz"
A native of Gladstone, Oregon, Liz Shuler grew up in a union household where her father, Lance, a member of the International Brotherhood of Electrical Workers (IBEW) Local 125, worked as a power lineman. Her mother, Joyce, worked as an estimator in Portland General Electric's service and design department.

After graduating with a bachelor's degree in journalism from the University of Oregon in 1992, Shuler was hired as the only female organizer at Local 125 to help wage a campaign to unionize PGE's clerical employees.

Shuler witnessed first-hand the disparity in respect and power between unionized and non-unionized employees, particularly among women workers. As a union representative, Shuler traveled across the local's multi-state jurisdiction, conducting organizing trainings for its 36 bargaining units, developing a political action committee, and bolstering the union's legislative power at the state level. 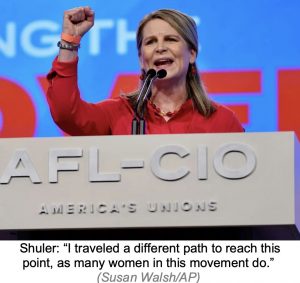 "Sister Liz," as she became known, helped lead a broad-based coalition of labor, community and environmental activists in 1997 to challenge and ultimately overcome energy giant Enron's powerhouse lobbying campaign to deregulate Oregon's electricity market. The corporate giant's subsequent fraud and abuse scandal resulted in bankruptcy and the decimation of the pensions of thousands of union members, including that of her own father.

In 1998, Shuler was tapped to help lead the AFL-CIO's successful effort to defeat California's "Paycheck Protection" Proposition 226, and was subsequently hired by IBEW President Jack Barry as an international representative in the union's national Political and Legislative Affairs Department. In Washington, D.C., she lobbied Congress, developed political education, mobilization and election programs, expanded the political action committee and worked to elect more women to Congress.

In 2004, Shuler was promoted to assistant to International President Ed Hill to drive the agenda of the nearly one-million member union, making her the highest-ranking woman in the union's history. 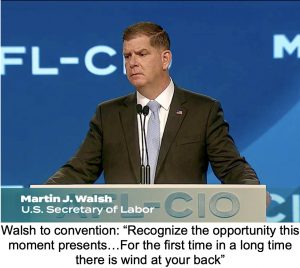 Trumka and Shuler were reelected in 2013 and reelected without opposition in 2017.

As Secretary-Treasurer, she served as the chief financial officer and is credited with turning deficits into surpluses and steering the federation through multiple fiscal crises, including the COVID-19 pandemic. Shuler also led the AFL-CIO's initiatives on the future of work, retirement security, the clean energy economy, public safety reform, workforce development, and empowering women and young workers.

Redmond, a United Steelworkers (USW) member since 1973, echoed Shuler’s remarks at the convention, stating, “We will keep fighting until every worker in this country has the chance to have a good, union job. Everybody in, nobody out. And we’re going to fix our labor laws and make that a reality. I know what the labor movement does. It brings the marginalized in from the margins. It brings respect to the disrespected. It lets people come together and collectively bargain for their own future.” 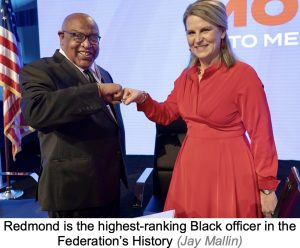 Redmond began his career at Reynolds Metals Co. in Chicago, where he became active in his local union, first as Shop Steward and then as Vice President before serving three terms as local President.

In 1996, Redmond joined the USW staff, working with local unions in the Chicago area before accepting a position at the international union’s headquarters in Pittsburgh in 1998.

In 2006, he was elected as International Vice President for Human Affairs, where he oversaw the union’s Civil and Human Rights Department and worked with USW allies across the country in responding to attacks on voting rights and in combating economic inequality.

July 20, 2022 Democrats and Republicans in Maryland elected their nominees for congressional, state executive and legislative seats yesterday, along with hundreds of down-ballot races. In the...