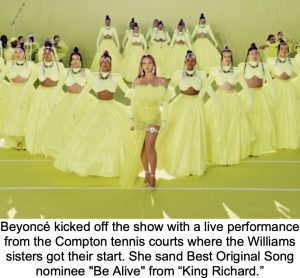 The annual Academy Awards, which recognizes accomplishments in the movie industry, was held last night, marking the 94th year of the "Oscars" ceremony.

In the first full in-person ceremony in two years, Hollywood's elite mixed, mingled and celebrated a year of film at the Dolby Theatre. True to history, as well, the stage was used as a forum for reflecting the mood of the country, and in some cases, that of the recipients themselves.

The Academy opted for the trio of popular comedians Amy Schumer, Wanda Sykes and Regina Hall as hosts, who rose to the task with witty quips about stars in attendance while interspersing political jabs about gender discrimination, political divisions, homophobia and more.

In the opening monologue, Schumer joked, “This year, the Academy hired three women to host because it’s cheaper than hiring one man.” In a nod to Florida’s “Don’t Say Gay” bill, Sykes said, “For you people in Florida, we’re going to have a gay night,” as Hall and Schumer then began shouting, “Gay! Gay! Gay!” 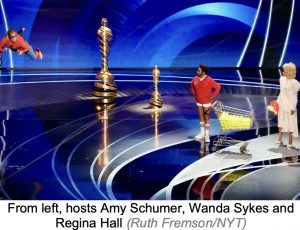 Taking aim at Republican Senate Majority Leader Mitch McConnell, Hall said, “This year we saw a frightening display of how toxic masculinity turns into cruelty toward women and children.” “Damn that Mitch McConnell,” Sykes added, before Hall clarified that she was referring to the plot of "The Power of the Dog."

In another, less popular bit, Hall lined up Simu Liu, Timothée Chalamet and Jason Momoa for “random Covid testing” and “Covid pat-downs,” which drew a barrage of tweets criticizing her for objectifying men.

One of the night’s best skits featured Schumer-as-Spider-Man descending from the rafters, Hall dressed as a makeup-heavy Tammy Faye Bakker and Sykes clad in a pair of white short-shorts that poked fun at Will Smith’s from “King Richard.” 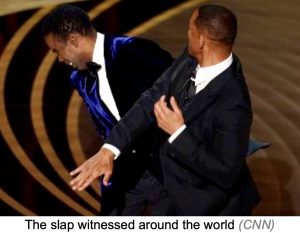 It was Smith's shocking actions, however, that dominated the night after presenter Chris Rock made a joke about the closely-cropped hair of Smith’s wife, Jada Pinkett-Smith, saying, “Jada, I love you. GI Jane 2, can’t wait to see you.”

The reference was to the 1997 film of the same name in which star Demi Moore famously shaved her head to a buzzcut. Pinkett Smith suffers from alopecia, a condition that leads to hair loss.

Smith promptly rose from his seat at the front of the crowd and clocked Rock, saying, “keep my wife’s name out your f***ing mouth.” It was at first unclear to shocked viewers if the smack was a part of the show, but that answer came immediately after as Smith repeated the statement, and the show was briefly muted to the televised American audience. Footage of the incident, however, was captured on uncensored international telecasts. 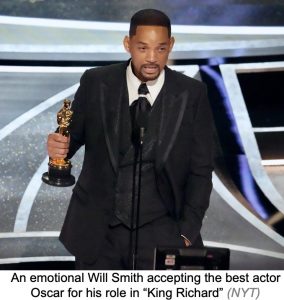 After saying, “Wow, Will Smith just smacked the s*** out of me,” a visibly stunned Rock recovered and presented the award for best documentary.

It is not the first time Rock has jabbed Pinkett-Smith at the Oscars. In 2016, the year several actors, including the Smiths, boycotted the "#OscarsSoWhite," Rock joked, “Jada Pinkett Smith boycotting the Oscars is like me boycotting Rihanna’s panties – I wasn’t invited!”

There was little time for confused show organizers, who reportedly considered removing Smith from the theater, to react, as Smith returned to the stage shortly after the incident to accept the Best Actor Oscar for his performance in "King Richard."

Before a standing ovation, in a very emotional, teary-eyed speech, Smith apologized to the Academy and to his fellow nominees, but not to Rock, drawing parallels to his character in “King Richard,” the fiercely protective father of tennis legends Venus and Serena Williams. 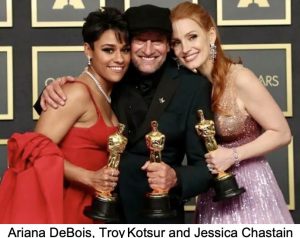 Ariana DeBose became only the second Latina and the first openly queer woman of color to win an Academy Award. Accepting her Best Supporting Actress Oscar for "West Side Story," DeBose said, “To anybody who has ever questioned your identity - ever, ever, ever - or you find yourself living in the gray spaces, I promise you this: There is indeed a place for us.”

When accepting the Oscar for Best Actress, Jessica Chastain spoke to the "discriminatory and bigoted legislation that is sweeping our country with the only goal of further dividing us. There’s violence and hate crimes being perpetrated on innocent civilians all over the world…. And for any of you out there who do in fact feel hopeless or alone, I just want you to know that you are unconditionally loved for the uniqueness that is you.” 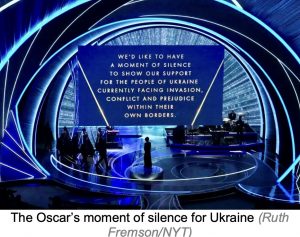 The war in Ukraine was also acknowledged, with singer Reba McEntire performing the inspiring Best Original Song nominated, “Somehow You Do” from the film "Four Good Days." McEntire was introduced by actress Mila Kunis, a native of Ukraine who moved to the United States when she was young, and who said of the Ukrainian people, “In such devastation, it’s impossible not to be moved by their resilience. One cannot help but be in awe of those who find the strength to keep fighting through unimaginable darkness.”