On President Trump's refusal to commit to a peaceful transition of power if he loses the election
"Well, so much for that Nobel Peace Prize," - Jimmy Kimmel

"So, the president of the United States won't commit to leaving office if he loses the election. Ah, you'll have to excuse me, I think I left the stove on in New Zealand, and I'd like to stick my head in it. I'm joking, obviously - New Zealand won't let our planes land there." - Stephen Colbert

"I bet even if Joe Biden wins they're going to find Trump in the White House basement someday living that 'Parasite' life." - Trevor Noah

"Folks, you know you're going through a bit of a dark patch in your nation's history when the president not endorsing the peaceful transition of power is the feel-good story of the day." - Stephen Colbert

"I'm getting the feeling this year is going to end with Trump locking himself in the Oval Office while yelling into the phone, 'Space force attack!'" - Jimmy Fallon

"So if Trump loses the election, getting him out of the White House will be like trying to get a bird out of your living room. It's like, 'Oh, I got 'em. Hold on, OK.? Nobody move - he's behind the curtain! Nobody move! Shut the door! Shut the door!'" -Jimmy Fallon

"Holy [expletive], I never thought I would see the day where an American president would threaten to not accept an election defeat. Because let's be honest: this is something you hear about in a random country where America steps in to enforce democracy. I feel like now it's only fair that those countries should send peacekeepers to the U.S.: 'Well, well, well. Refusing to give up power, rampant disease and high unemployment. Who's the [expletive]hole now, huh?'" - Trevor Noah

"Can you imagine how fun it would be if the incoming president always had to fistfight the outgoing president? Yeah? Biden and Trump are gonna be at the White House recreating the geriatric fights from 'The Irishman,' while Kamala Harris has Mike Pence in a head lock? [imitating Mike Pence] 'Oh no, my hair grazed her bosom. Now I'm going to hell.'" - Trevor Noah 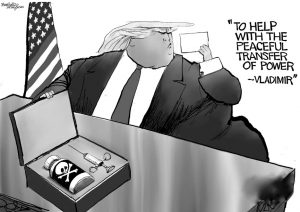 "If you've paid attention to Donald Trump over the past five years, it's no surprise that he likes the idea of being a dictator. I mean, he's written more love letters to Kim Jong-un than his own wife." - Trevor Noah

On President Trump's campaign rally in Pittsburgh this week with thousands gathered in close quarters, many without masks.
On the crowd, "Trump might be getting four more years, but I'm not so sure about the rest of you." - Seth Meyers

"And by the way, this isn't hypothetical. We already know his rally in Tulsa led to a surge in cases there. At this point, Trump rallies are on the list of high-risk activities, just like doorknob licking, hugging everyone on the subway and eating shrimp at the strip club buffet." - Seth Meyers

"By the way, did you see which network was airing the rally? C-SPAN3. You know your campaign is going well when even C-SPAN2 says, 'Nah, we're good.'" - Jimmy Fallon 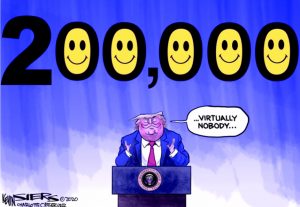 "[imitating Trump] They say 200,000 people have died, but I haven't heard from any of them. Raise your hand if you've died of coronavirus. See? Nobody.'" - Stephen Colbert

"Trump said the virus affects 'virtually nobody.' Then somebody in the front row sneezed and Trump hit the floor like he dropped his remote." - Jimmy Fallon

"After Trump made that comment, doctors and nurses wanted to respond, but they're currently in the middle of a 4,000-hour shift." - Jimmy Fallon 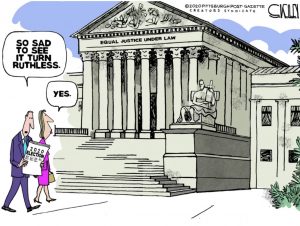 "It's pretty wild the Republicans are in favor of Trump's nominee, and he hasn't named one yet. Even the people who got engaged on 'Love Is Blind' were like, 'Don't you want to see who it is first?'" - Jimmy Fallon

"That's right, 51 out of 53 Republicans are now on board, while the other two stick out like masks at a MAGA rally." - Jimmy Fallon

"And now it sounds like a vote could be held in just a few weeks. Man, we haven't seen Republicans move this fast since Men's Warehouse had a closing sale." - Jimmy Fallon

... and the hypocrisy of GOP leaders who opposed such a move in 2016, when Obama was president.
"Now, I don't think anybody's surprised that Senate Republicans said one thing when Obama was president and another thing when it's Trump. I mean, you can't even call them inconsistent, you know? Doing whatever it takes to get his way is the one consistent principle that Mitch McConnell lives by. You know, it's that and eating baby birds right out of the nest." - Trevor Noah 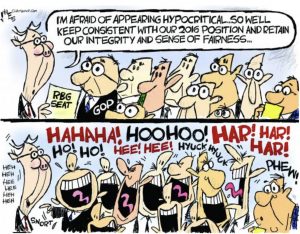 "Sure, the Olympics were canceled, but at least we have the Republicans to show off some truly spectacular back flips." - Jimmy Fallon

"Now, look, I get that highlighting their hypocrisy is mostly pointless. Hypocrisy only matters if you have shame. They don't. Mitch McConnell certainly isn't capable of feeling shame. He looks like a haunted, wooden doll you'd find in an estate sale and has the same level of emotional complexity." - Seth Meyers

"I get that the hypocrisy is baked in. Pointing it out won't change their minds. It's like telling a middle school bully, 'Giving me a wedgie won't make your parents get back together.' He knows that - he just wants to give you that wedgie." - Seth Meyers

"But he's promised a female nominee. This means Trump is going to be spending a lot of time this weekend enjoying his favorite hobby: rating women on a scale of one to 10." - James Corden

On Trump's COVID Count
Last week, President Trump suggested that America's Covid-19 death rate was low compared to the rest of the world's, "if you take the blue states out." (yes, he actually said that) 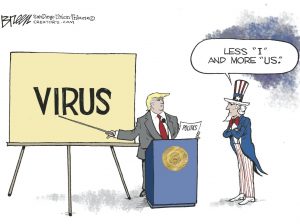 "But sure, if you just take out all the people that died, then you did a great job, dude. By the same token, if you take out all his albums, Kid Rock has had a fantastic career." - Seth Meyers

"Did this dude just try to pull the 'if you eat around the mold, everything's fine' move, but with corona deaths?" - Trevor Noah

"This has to be one of the most grotesque things the president has ever said. I'm sure Trump's not our first sociopath president, but he's definitely the first one who's open about it. He's the kid who lights ants on fire for fun and when you catch him doing it, he says, 'It's not what you think - torturing living things gives me joy.'" - Seth Meyers

"It's pretty astounding that a leader - a leader - would even think of his country in that way. You can't just write off entire states. My man, this isn't the Electoral College; the popular vote counts." - Trevor Noah

"Also, and I know this is going to shock you, Trump's wrong. Because the states with the most deaths are New York, New Jersey, Texas, California and Florida, which are, of course, the states with the largest populations in the country. So he's just saying if you don't count states with people, he's done a great job." - Stephen Colbert 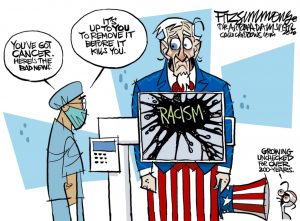 "[imitating Trump] So, if you don't count the racial tension and the economy, it's been a pretty smooth six months, wouldn't you say?" - Jimmy Fallon

On revelations that Trump considered using a heat ray on protestors in June at Lafayette Park
"The heat ray produces a magnetic field, similar to a microwave. Strong enough to hurt like crazy without leaving burns. Of course, to heat your protesters evenly, you're gonna want them to stand on a rotating plate."  - Stephen Colbert

"Damn, I can't believe this is real life. Federal police wanted to use a heat ray against peaceful protesters outside the White House? At this point, guys, can we admit Trump is essentially a real-life Bond villain?" - Trevor Noah

"To be fair, the administration doesn't just want to expose people to a deadly virus, they also want to flame-broil protesters." - Stephen Colbert 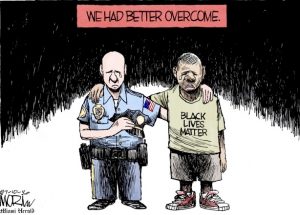 "By the way, what a crazy way to learn that America's military has a heat ray. This is the same country that can't find money for veterans or health care or teachers, but somehow has a giant microwave gun just lying around. You know, just in case we want to Hot Pocket the Middle East." - Trevor Noah

"Sorry, what? A heat ray? Who are his advisers, a bunch of Minions stacked on top of each other?" - Jimmy Fallon

"Even Kim Jong-un was like, 'That's pretty messed up, dude.'" - Jimmy Fallon