On Trump's last day
"I don't know what tomorrow's gonna feel like. Probably like that moment when they pull the nasal swab out of your nose." - Jimmy Fallon 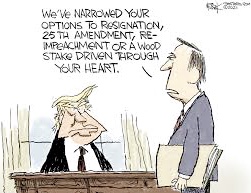 "I have to say, I'm not sure what to feel right now. It feels like the night before my wedding and my divorce all rolled up into one." - Jimmy Kimmel

"Look, man, here's the thing: By this time tomorrow, Donald Trump will be out of power. And I just hope - I hope that he slowly fades away like one of his tans. And I know that he'll never be fully gone, all right? He's basically the Covid of politics. America's gonna be experiencing side effects long after he's out of the system. And, unfortunately, we're probably gonna see mutated strains, as well." - Trevor Noah

On Biden's first day
"The first day on the job is stressful - any job - but especially when you're the new manager and the last guy got called into H.R. for inappropriate workplace treasoning," - Stephen Colbert 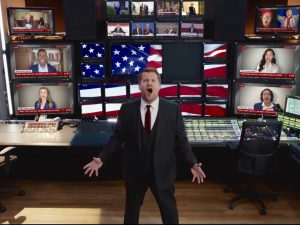 "That's big news right there. Our president spent a full day in the office." - Jimmy Fallon

"The Bidens are moved in. Their dogs must be going crazy because everything smells like fried chicken in there." - Jimmy Kimmel

"Yeah, it was Biden's first full day. I'm sure part of him was like, 'Just to mess with everyone, I should go golfing.'" - Jimmy Fallon

"What the Biden team is doing right now is like when you open the hood of a car you've had in storage - like your dad's '67 Shelby GT - and you find out rats got inside and ate all the insulation from the wires and chewed up the upholstery." - Jimmy Kimmel 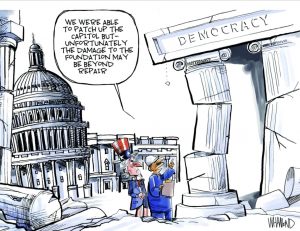 "Yo guys, Joe Biden is so lucky. All he has to do is have a vaccine plan and not lie for 10 minutes and he's basically, what, the next George Washington?" - Trevor Noah

"I love them out there going, 'No, no, no - he's not in office anymore, so we don't need to convict him.' That's like someone burning down your house, and then you go, 'We should find the person who did this' - 'Look, the house is gone now, let it go. Let's focus - let's focus on building a new house.'" - James Corden

"This is one of the most ridiculous arguments ever. Trump committed crimes on his way out of the door. So, what, the people just have to let it go? That policy doesn't exist anywhere else. If you get fired at Best Buy, they don't just let you steal a TV on the way out." - Trevor Noah 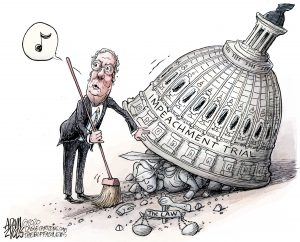 "I mean sure, his supporters were looking for some of you with torches and pitchforks, but come on, that was like three weeks ago." - James Corden

"Well, guys, it must be Groundhog Day because we're living through Trump's impeachment again...But it seems Punxsutawney Phil has been spending lockdown like the rest of us, because he came out in stretchy pants eating a tube of cookie dough." - Jimmy Fallon

... and legal representation
Trump "wanted his lawyers to make the case that he won the election and they quit, so this should be fun." - Jimmy Kimmel 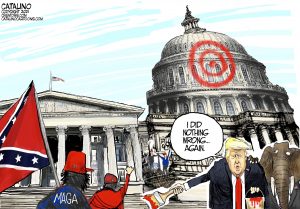 "Trump suddenly found himself without any legal representation, which is still a huge improvement over being represented by Rudy Giuliani."  - James Corden

"At this rate, Trump's going to be the first president to show up to his impeachment trial with a public defender." - Seth Meyers

"What, was the guy who defended Saddam Hussein not available?" - Jimmy Fallon

"Trump's (new) legal team filed a brief that claims that he isn't responsible. It wasn't that hard to write. His lawyers just copied and pasted his defense from the last impeachment: Control-F 'Ukraine,' replace with 'riot.'" - Jimmy Fallon 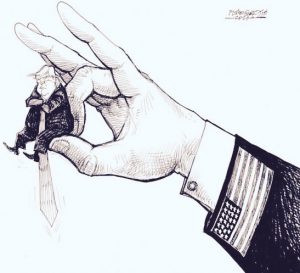 "On the very first page of their first legal filing, they wrote, 'to the honorable members of the Unites States Senate.' They misspelled 'United States.' And we're off!" - Jimmy Kimmel

"There was actually a typo on the first page of the Trump brief, but I'm sure it was a long, complicated legal term. Nope, it's just - just the name of our country, that's it." - Jimmy Fallon