On Elon Musk being named Time’s Man of The Year
“Man, I’m so happy for him. Like the guy could really use an ego boost, you now?” - Trevor Noah

“And honestly you can’t argue with this. I mean, the richest man in the world, who also controls space, crypto and electric cars? Who would even be second place, like maybe Pete Davidson, maybe?” - Trevor Noah

“Yeah, Musk received the honor for his work in space exploration and after he bought 10 million subscriptions to Time magazine. I’m kidding, although it was a little strange that everyone at Time drove into work today in a brand-new Tesla.” – Jimmy Fallon

“Being named person of the year is a big deal. It’s basically ‘sexiest man alive,’ but you’re competing against the Dalai Lama and the pope.” – Jimmy Fallon 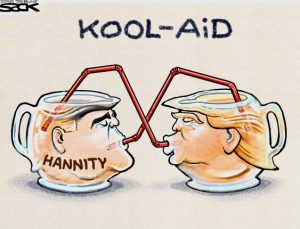 On the revelations that Fox News commentators Brian Kilmeade, Sean Hannity and Laura Ingraham sent pleading texts to Mark Meadows on January 6th, asking Trump to stop the insurrection
“Gee, if only they had some sort of media outlet where they could have said that publicly.” - Jimmy Kimmel

“So, the January 6th attack scared Laura Ingraham — and keep in mind, her side gig is appearing in your bathroom mirror if you whisper ‘Medicare for all’ three times.” - Stephen Colbert

“The records show that then-White House chief of staff Mark Meadows also received a text from Fox News host Brian Kilmeade that said, ‘Please get him on TV. Destroying everything we’ve accomplished.’ That is a shocking revelation — they had to beg Trump to go on TV?” – Seth Meyers

“Trump was like, ‘If I replied to every text that said “What you’re doing is crazy,” I’d never get anything done.’” – Jimmy Fallon 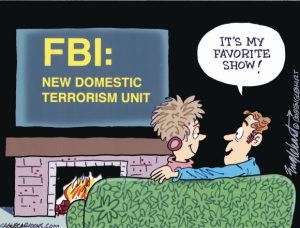 “Trump didn’t want to hear it. Not only did Trump ignore texts from Fox News, he also dropped them from his family cellphone plan.” – Jimmy Fallon

“And I love that they were so concerned that this could ruin Trump’s legacy: ‘If he gets somebody killed today, no one will remember that time he told everyone to drink bleach.” - Trevor Noah

On the House voting to hold former Trump White House Chief of staff Mark Meadows in criminal contempt for refusing to cooperate with the January 6th investigation
“Yes, hell yes! Criminal contempt — and the rest of us can just keep holding him in regular contempt.” - Stephen Colbert

“So, who sent these messages? Well, the identity of these lawmakers was not being disclosed, so people on Twitter are now guessing names like Paul Gosar, Jim Jordan, Devin Nunes, Matt Gaetz, Ted Cruz and Josh Hawley — and you can play the home version in the fun new game ‘Clue-less.’” - Stephen Colbert 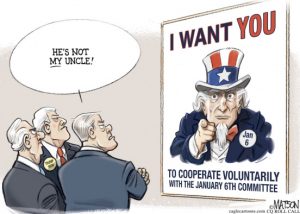 “These messages have the ring of unfiltered truth because they’re taken from Mark Meadows’ two personal phones — and nothing says ‘innocent’ like a second cellphone.” - Stephen Colbert

The January 6th Committee says it has proof Trump watched the insurrection unfold on TV in the Oval Office dining room, then "kept having to retape his video telling fans to leave the Capitol riot, which may explain his 187-minute silence during the attack. Over three hours of silence from the former president! That's an unheard-of phenomenon — that Melania calls 'my dream date.'" - Stephen Colbert

On GOP Congresswoman Marjorie Taylor Greene getting permanently kicked off Twitter for spreading misinformation about the coronavirus. Green also called for a “national divorce” between Republican and Democratic states
“How would a national divorce even work? Who would get the White House? Who would pay alimony? Who would get custody of Eric? It would probably just be the two sides pushing him back and forth: ‘He’s a Republican, so he should go with you.’ ‘But he’s a New Yorker, so he should go with you!’” - Seth Meyers 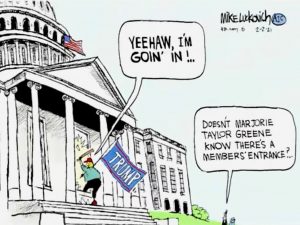 “And regardless of how you feel about the ethics of kicking politicians off Twitter, it’s just a huge quality-of-life improvement. Like when Trump got kicked off Twitter. Trying to live in a world where people like Trump and Greene are constantly screaming insane [expletive] on Twitter is like trying to have a conversation with a friend on the street next to a jackhammer.” - Seth Meyers

“Greene had been temporarily suspended in the past for spreading Covid misinformation, but her latest online lie violated Twitter’s five-strike policy. Yes, five strikes. Fool me once, shame on you. Fool me twice, shame on me. Fool me three times, you only get two more foolins’ after that.” - Stephen Colbert

“On the bright side, she is still a full-fledged member of the United States Congress.” - James Corden 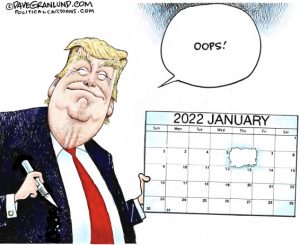 On Trump calling off his news conference on the anniversary of the January 6th Capitol riot
-- or, as Stephen Colbert joked, “that horrible day when millions of Americans stared at the TV in shock and grief and said, ‘Ah, crap, is that Uncle Dave?’”

“Apparently, the real reason he canceled the event is because ‘some advisers urged the former president to reschedule for a day that would draw less attention to a low point of his presidency.’ So, every day of his presidency?” - Stephen Colbert

“Donald Trump is canceling an appearance and listening to advice from other people? I’m worried about him.” - James Corden

In canceling, Trump referred to the insurrection as a “completely unarmed protest.” “I‘d like to point out that they were armed. And when did we start having to say ‘unarmed’ protests? Protests are unarmed by default. That’s like saying: ‘We had a lovely weekend. It was a totally bloodless cotillion.’” - Stephen Colbert

“So, no press conference on the 6th, but Trump will speak at an Arizona rally on January 15th instead, just as Martin Luther King Jr. would have wanted.” - James Corden 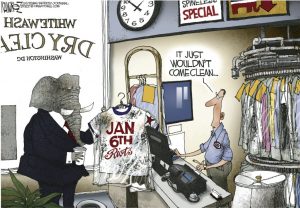 On the anniversary of the insurrection
“Now, there were some notable absences from the ceremonies today. During a moving moment of silence for the officers who lost their lives, there were only two Republicans on the House floor. The other Republican legislators chose to re-enact Jan. 6 by hiding in fear.” - Stephen Colbert

On Ted Cruz backpedaling on Tucker Carlson’s Fox News show, apologizing for referring to the events of January 6th as terrorism
“And look, we all know Ted Cruz has a thing for self-humiliation. He slinked back from Cancún after escaping a blackout in his state. He endorsed Donald Trump after Trump insulted his wife and his father, and took that infamous photo where he made campaign calls for Trump, looking like Jack Lemmon in ‘Glengarry Glenn Ross.’ And he keeps showing up in public with that facial hair looking like a Chewbacca who shaved everything but the beard.” - Seth Meyers 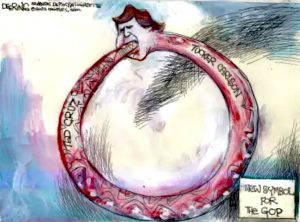 “That clip was like watching one of those dumb cable news segments where a reporter willingly gets Tasered just to show everyone how bad it is.” - Seth Meyers

“I also like how Cruz finds a way to mention in that clip that he texted Tucker like they’re good pals. Unfortunately for Ted, any time he tries to text or call someone, it comes up as ‘Spam likely’ — or, in his case, ‘Likely made of Spam.’” - Seth Meyers

On people purposely get infected with Omicron to “get it over with”
“I mean, all the other late-night hosts are doing it,” said Stephen Colbert, referring to James Corden, Jimmy Fallon and Seth Meyers, who have all contracted COVID over the last two weeks. “I’m starting to think they had a secret sleepover, and I wasn’t invited.”

“I honestly have no idea how I haven’t been infected with this. I’m starting to feel like before I lost my virginity: Everyone else had, I know I probably will eventually, and when I finally do, I hope it goes as fast as losing my virginity did.” - Jimmy Kimmel 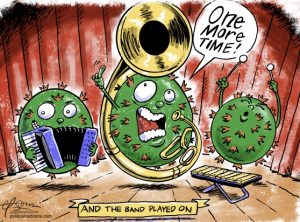 “Soon, there’s going to be almost as many people in hospitals as there are TV shows about hospitals.” - Stephen Colbert

“Thanks to Omicron, the seven-day average for newly reported cases in the U.S. topped 700,000. Seven hundred thousand! That’s the population of Denver, and you know you’re in trouble when you’re higher than the people of Denver.” - Stephen Colbert

On a new study showing that cannabis compounds can prevent Covid-19 from penetrating human cells
“This would be interesting. All this time we’ve been listening to the CDC, we should have been eating CBD.” - Jimmy Kimmel

“You know, it’s funny — all these crazy cures, I’m like ‘Oh, that’s ridiculous.’ Ivermectin, the horse dewormer; bleach. And then somebody says marijuana prevents Covid, I’m like ‘Oh, really? Do tell.’” - Jimmy Kimmel

“Great news for all the teenagers whose parents find weed in their room: ‘Oh, Mom, I see you found the Covid-stopping compounds that I hid in my sock drawer. Those aren’t mine. no, no. Those aren’t mine. I’m just holding them for my friend, Tony Fauci.’” - Stephen Colbert

“Now, if you’re skeptical about the science here, let me remind you, this study has been reviewed by the CDC’s stoner nephew the THC.” - Stephen Colbert

On the Supreme Court striking down President Biden’s vaccine mandate for large companies
“What the hell, Supremes? What — what do you know about large employers? You’re a small business with nine workers whose dress code is anankle-length Hefty bag.” - Stephen Colbert 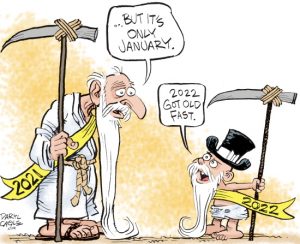 January 16, 2019 The Trump administration’s addition of a citizenship question to the 2020 Census is off the survey — for now. On Tuesday Judge Jesse M. Furman of the US District Court...