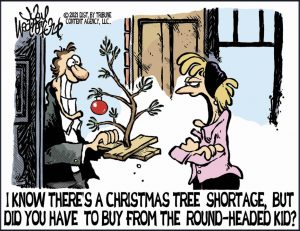 On the 50-foot tree in front of Fox News’s New York City headquarter, which was set on fire this week
“The fire is believed to have started after Fox News’ pants caught on fire.” - Jimmy Kimmel

“The fire is believed to have started because Judge Jeanine Pirro ate one too many rum balls and breathed on a cigarette.” - Jimmy Kimmel

“And Fox News tried to warn us this was coming. Every time a store clerk says, ‘Happy holidays,’ a Christmas tree bursts into flames.” - Stephen Colbert

“Even though lighting trees on fire is very much in line with Fox’s position on climate change, the hosts of their morning show were very upset today.” - Jimmy Kimmel

“Of course, this never would have happened if the tree had a gun.” - Stephen Colbert 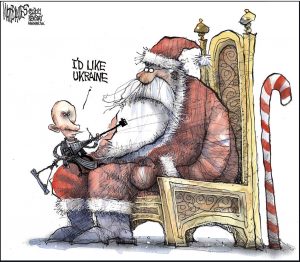 “Makes sense — the only way to resolve a delicate situation that requires crystal-clear communication is two old men on a Zoom.” - Stephen Colbert

“Today, President Biden held a big one-on-one video call with Russian President Vladimir Putin that lasted two hours. And like most two-hour meetings over Zoom, Putin was like, [imitating Putin] ‘This could have been email.’” - Jimmy Fallon

“On the bright side, it was the first time Putin could see Biden on camera when Biden actually knew he was on camera.” - Jimmy Fallon

On the US' diplomatic boycott of the 2022 Winter Olympics in Beijing due to China’s human rights abuses
“Nothing will convince China to change their ways like not sending the secretary of agriculture to the Olympics.” - Jimmy Fallon 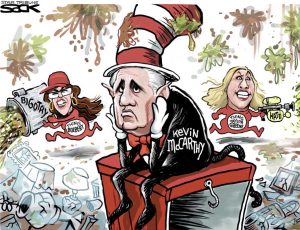 “And that’s a real shame that the Americans officials won’t be at the Olympics, because you realize Kamala Harris was about to become the first Black woman to ever watch a hockey game.”  - Trevor Noah

“If you want to get back at China, you have Marjorie Taylor Greene in the stands.”  Trevor Noah

“When the news broke, everyone’s mom was like, ‘The oiled-up flag bearer from Tonga will still be there, right?’” - Jimmy Fallon

On news in former Trump COS Mark Meadows' book, that Trump tested positive for COVID before his first debate with Joe Biden
“Meadows wrote that when he informed Trump he’d tested positive, Trump replied, ‘Oh, [expletive], you gotta be [expletive] kidding me,’ which is what most of us said when he was elected president.” - Jimmy Kimmel 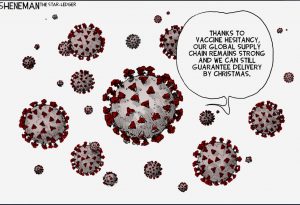 “Trump took no precautions after testing positive. He didn’t cancel events; he was maskless inside the White House and on Air Force One. It’s almost like, you know, if you didn’t know him better, it’s almost like he doesn’t care about others.” - Jimmy Kimmel

“Trump participated in the debate despite testing positive. Or, as Fox News is spinning it, ‘President Trump battled on heroically, and graciously shared his exclusive strain of Covid with a stage full of ungrateful libs.’” - James Corden

At the event, Meadows instructed everyone in the president’s immediate circle to treat him as if he were positive. “So no touching him, no getting close to him, avoid him unless absolutely necessary – a strategy the CDC calls ‘The Melania.’” - Stephen Colbert

In retrospect, I feel like maybe we should’ve known from that debate that Trump had something, based on his performance. It was either COVID or rabies.” - Seth Meyers

“I’m not saying that Trump was trying to assassinate Joe Biden, but he definitely wasn’t going out of his way to avoid it.”- Trevor Noah

“That explains why Trump originally wanted to end the Biden debate with a long, drawn-out kiss.”  James Corden

“Sadly, testing positive for COVID was the only positive thing he did in four years as president.” - Jimmy Kimmel 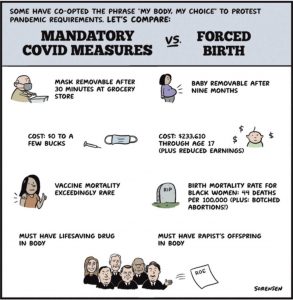 “Vaccines are mandated because COVID is contagious. No one ever says, ‘Can you put a mask on your belly? I don’t want to catch baby.’” - Stephen Colbert.

“Unfortunately, like the trauma from walking in on your grandparents having sex, Scotus appointments are for life. We could be dealing with the consequences of their decisions for decades, especially when it comes to reproductive rights. For some people, it will be easier to find a Blockbuster than it will be to find a clinic.” - Samantha Bee

Colbert summed up the issue of a heavily right-tilting court by saying: “I don’t want to get too technical but we, what’s the word, don’t live in a democracy.” 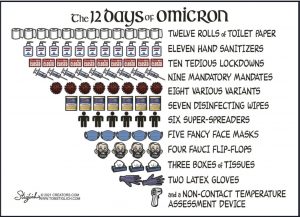 On Omicron
The first Omicron case on US soil was found in California, which drew proud claim from the state’s secretary of health and human services. "Good for you, Golden State. You put that kind of positive spin on all your disasters: ‘Greetings from California, home of extra-crispy trees.’” - Stephen Colbert

“Everybody’s talking about it, but nobody really knows what the story is really about, because it’s all Omicron — Omicron this and Omicron that. We don’t ‘knowmicron’ about Omicron.” - Stephen Colbert

“Experts are hoping it ends up being like the second season of ‘Tiger King’ where everybody talks about it, but nobody actually experiences it.”- Jimmy Kimmel 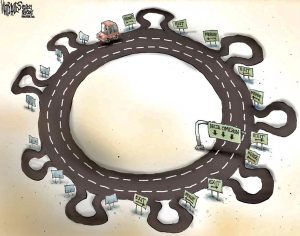 “Well, here’s some good news. Dr. Fauci said that the first data on the severity of the Omicron variant is ‘encouraging.’ Yeah, that’s what passes for good news in 2021...Yep, it’s encouraging, which is positive enough to continue with your holiday plans, but vague enough to make you spend the entire time freaking out.” - Jimmy Fallon

Trevor Noah encouraged viewers not to freak out just yet, saying, “We have no idea if Omicron is actually that bad...we don’t know if it might spread more easily or we don’t know if it will be more deadly. It’s just too early to know. And I hate to sound like someone describing every streaming show right now, but you gotta stick with it the first couple of weeks and see where it goes.”

“But no one knows for sure, so both Pfizer and Moderna are testing how well their vaccines protect against Omicron. Unfortunately, they won’t know the results for two weeks, at the earliest. Evidently, the scientists are stuck in a container off the coast of China.”  Stephen Colbert 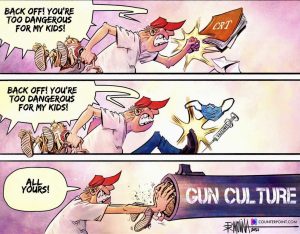 On Kyle Rittenhouse verdict, found not guilty of intentional homicide for killing two people during anti-racism protests in Wisconsin
“OK, cards on the table: I’m not a legal expert, so I can’t tell you whether or not Kyle Rittenhouse broke the law. But I can tell you this: if he didn’t break the law, we should change the law.” - Stephen Colbert

Florida Congressman Matt Gaetz, tweeted “NOT GUILTY!!!!!!!” when the verdict was released. “Of course, Gaetz has a vested interest in juries finding people not guilty,” Colbert quipped, referring to a federal investigation into the congressman for sex trafficking minors, “especially when it involved a 17-year-old crossing state lines.”

On avoiding a government shutdown
Jimmy Kimmel spoke about congress trying to avoid a shutdown due to finance issues. “I don’t understand this. Donald Trump isn’t president anymore – why are we still running the country like one of his businesses?” 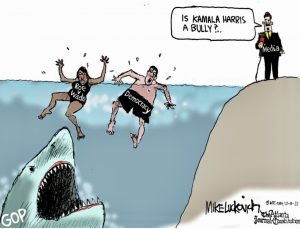 On Biden kicking off his 79th Birthday with a colonoscopy
“Personally, I’m grateful that on Friday, history was made because Joe Biden temporarily transferred power to Vice President Kamala Harris while undergoing a routine colonoscopy, making Harris the first woman to assume presidential power.

Yes, 100 years after women got the right to vote, we finally got the first female president on a technicality.” - Stephen Colbert