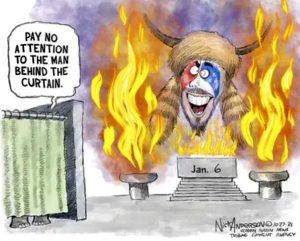 On the January 6th Committee Investigating the Attack on The Capitol

“In the days leading up to January 6, these Traitor Joes were plotting how to throw out election results, huddled together in a set of rooms and suites in the posh Willard Hotel in downtown D.C. Their room bar tab must’ve been huge. It’s, like, 20 bucks a pop for those mini Molotov cocktails.” - Stephen Colbert 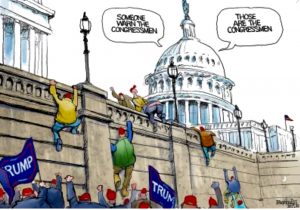 “Now, just to be clear, a subpoena doesn’t mean you’ve done anything wrong -- although in this case, it absolutely means you did something wrong.” - James Corden

“We’re so close to figuring out who’s responsible for this. What a mystery.” - James Corden

On Congressional Members Involved in the Attack

A new report in Rolling Stone magazine alleged that several members of Trump’s White House staff were involved in planning the rally that led to the January 6 insurrection.

Representatives Lauren Boebert of Colorado, Louie Gohmert of Texas and “Marjorie Taylor Greene of Mordor” -- as Jimmy Kimmel referred to her on Monday night -- were just a few of those involved. “What a sad lineup that is. It’s the legion of dumb.” 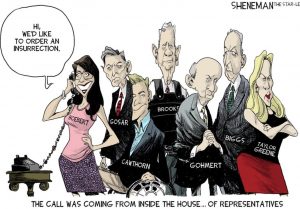 “And I, for one, am shocked that Congress had anything to do with it, because it nearly worked.” - Seth Meyers

“Representative Paul Gosar of Arizona was named, too. He reportedly told the organizers repeatedly they would get a blanket pardon from Trump and they were all, like, ‘Well, if there’s one thing we know about Donald Trump, he’s as good as his word.’” - Jimmy Kimmel

On a federal Judge's takedown of Trump's appeal

(Although later overturned), a federal judge ruled earlier this week that Donald J. Trump can’t prevent the release of files related to the Capitol attack, saying of Trump that “presidents are not kings, and plaintiff is not president.”

“Damn! I have not seen such a brutal attack on an elected official since January 6th.” - Stephen Colbert 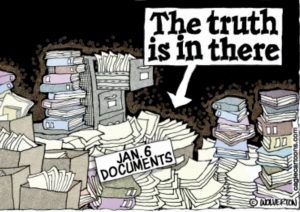 “The last time Trump got a spanking like that was with a copy of Forbes magazine by Stormy Daniels.” - Jimmy Kimmel

“That is the worst denial for the former president since any time he tried to hold his wife’s hand.” - Stephen Colbert

“You think anyone ever took notes in a meeting with Trump? When they finally subpoena those notepads, they’re just going to be filled with random doodles and inscrutable comments like, ‘Ingest bleach maybe?’” - Seth Meyers

On Ted Cruz' angry attack on Big Bird’s announcement about receiving a COVID vaccine, claiming the children’s TV icon was spreading “government propaganda for your 5-year-old.”

Jimmy Kimmel said conservatives like Cruz truly believe sentiments like the one he shared: “The elections are rigged, the deep state runs the world, and Big Bird is working for Merck now.” 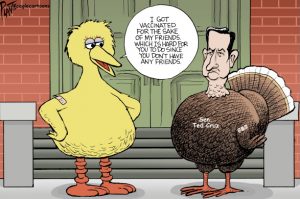 “And it’s interesting because not only is Ted Cruz vaccinated himself, Ted Cruz was born with an immunity that protects him from contracting any friends.” - Jimmy Kimmel

“Ted Cruz has it in for ‘Sesame Street’ because he’s constantly getting mistaken for the Count.” - James Corden

“I have to admit it’s a tough one. I mean, who are you siding with, the beloved and iconic children’s character widely celebrated over a half a century by people of all ages and backgrounds from all parts of the world, or a widely disliked wannabe werewolf with the charm of a serial killer and the voice of a dying barn owl who was once called ‘Lucifer in the flesh’ by one of his fellow Republicans after another fellow Republican joked he was so unpopular you could murder him and get away with it.” - Seth Meyers

On Biden's Visit with the POPE

Before going to COP26 in Scotland, President Biden visited the Vatican in Rome, where he gave Pope Francis a coin and parted ways by saying, “God love ya.” 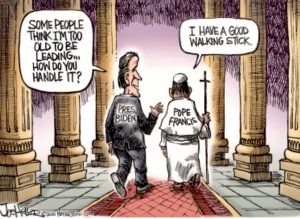 “Yeah, he does. Pretty sure that’s the papal job description on LinkedIn: ‘God love ya. Must be good with crowds. Some Latin required. Five to 10 years’ waving experience.’” - Stephen Colbert

“That is the most unnecessary ‘God love ya’ in history. You don’t need to say ‘God love ya’ to the pope -- he knows God loves him. He had dinner with him last night.” - Trevor Noah

“I mean I guess it shouldn’t be surprising that Biden’s meeting with the pope was three times as long as Trump’s. I mean, knowing Biden, he puts in a good 40 minutes with the barista when he pops into Starbucks.” - Seth Meyers

“President Biden announced yesterday that more than 70 countries would join the U.S. in a pledge to reduce global methane emissions by 30 percent by the end of the decade. Yeah, but not Russia or China, right? That’s like saying: ‘Hey, great news — I got the whole neighborhood to agree to stop murdering, except for Hacksaw Dave and Larry the Strangler. Sleep tight, everybody!’” - Seth Meyers 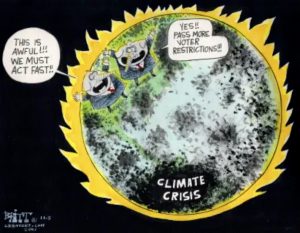 “Biden ended his big speech by saying, ‘God bless you all and may God save the planet.’ And God was like, ‘Uh, this is definitely a you-broke-it, you-bought-it situation.’” - Jimmy Fallon

“The first time you see people in person post-pandemic is always awkward. It explains the G20 itinerary: ‘See another world leader approaching; wonder if they’re going for a handshake; notice they’re actually coming in for a hug; hug them, only to realize maybe they weren’t and you just made it awkward; call out the fact that you made it awkward and joke about how you’ve forgotten how to interact with other humans; solve climate change?’” - Stephen Colbert

“Climate change was one of the main things on the agenda, and the G20 leaders took a bold stand, pledging to achieve global net-zero greenhouse-gas emissions by or around midcentury. That doesn’t sound very urgent. It’s like calling 9-1-1 and having the operator tell you the EMTs will be there sometime between the hours of noon and the funeral.” - Stephen Colbert 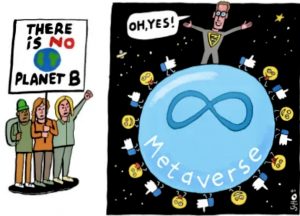 “Of course, everyone’s been talking about Facebook lately, and Mark Zuckerberg just announced that he’s ‘retooling’ the social media platform toward young adults and away from older users. Honestly, just make it a little harder to sign in, and you will never see an old person on Facebook.” - Jimmy Fallon

“Yeah, Facebook changed their name. Yeah, ‘Meta,’ as in when I joined Facebook, I ‘Meta’ lot of crazy people.” - Jimmy Fallon

“This feels like when there’s an E. coli outbreak at a pizza place and they just change the name from Sal and Tony’s to Tony and Sal’s. Same gross owners.” - Jimmy Fallon

“Companies often change their name to help their image and since it’s up for grabs, Johnson & Johnson is now Facebook & Facebook.” - Jimmy Fallon

“A group of U.S. news organizations last week began publishing a series of stories based on internal Facebook documents showing that the social media platform spreads misinformation, incites violence and facilitates human trafficking. Even worse, it gives people from high school a way to get in touch with you.” - Seth Meyers

“And another interesting detail is that Facebook engineers -- they will prioritize the posts that get a lot of emoji reactions, including the anger emoji by 5-1 over just the regular like. The hate and the lies on Facebook -- it’s like the nicotine in a cigarette: It’s not what you come for, but it’s why you stick around.” - Jimmy Kimmel

On Shots for Kids

“An FDA panel has given the green light to the Pfizer vaccine for kids between the ages of 5 and 11. That’s right. That’s right, kids’ vaccines are the best way to prevent the two things parents fear the most: Covid and home-schooling.” 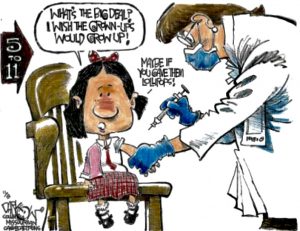 “Kids could get the shot as soon as next week. Great timing, right after they go door to door on Halloween.”

“Here’s how the vaccine will work: Older kids can get Pfizer, younger kids can get Moderna, and the middle child can get Johnson & Johnson.” - Jimmy Fallon

DemList relies on individual contributions to support our work. Please give $15, $25 or $50 here

Election news dominates the news cycle every four years — and this year, more than ever before — also provides the late night hosts with unlimited content. For a little reprieve from...