On This Week’s Fox Fake News

As of last Tuesday, over 2,000 Southwest flights had been canceled, due to weather and external factors, but Fox News Commentator Tucker Carlson reported that the cancellations were caused by vaccine mandates. Carlson admitted that he ‘couldn’t say for certain’ that the mandate had caused the issue, but they were behind them, anyway. 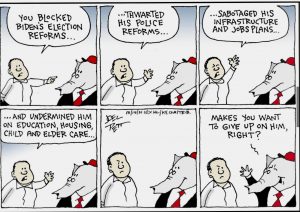 “You can’t say for certain? Well, then, please, by all means, put it on television. We all know that’s how journalism works. Who can forget the famous Woodward and Bernstein headline, ‘Did Nixon Do Watergate? Seems Like the Kind of Thing He’d Do, but Who Knows?” – Seth Meyers

“I’ll never tire of Tucker’s ‘just asking questions’ routine: [imitating Carlson] ‘Were these protests against Biden’s vaccine mandate? Did Joe Biden secretly replace all the real pilots with communist antifa woke-anistas, or were the delays caused because the flight attendants refused to give you a second bag of Biscoff cookies when you asked for one?’” – Seth Meyers

“American, Southwest, United, JetBlue, Alaska — most of the major airlines have mandates. The only big one that I know that doesn’t have it is Delta, which is nuts. If any airline should have a vaccine mandate, it’s the one named after the variant.” – Jimmy Kimmel 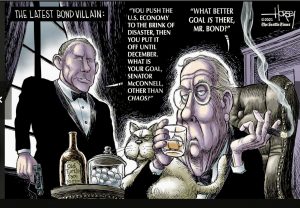 On the Reconciliation Armageddon

“I hope everyone in America is using protection, because it is very possible that we are all screwed,” said Stephen Colbert, on the potential government shutdown and possibility of hitting the US debt ceiling.

“It would be what one economist called ‘financial Armageddon.’ That’s bad news and even worse timing, because America’s already scheduled a plague Armageddon, a climate Armageddon and a democracy Armageddon.” - Stephen Colbert

“Yes, for one magical vote a year, senators leave the mortal world behind and enter an enchanted land of reconciliation. [singing to the tune of ‘Pure Imagination’ from ‘Willy Wonka and the Chocolate Factory’] Come with me, and you’ll be / In a world of reconciliation / It’s our sole remedy / Except for pure intoxication.”- Stephen Colbert 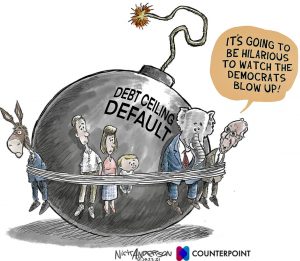 “Reconciliation is a phantasmagorical place of legislative wonder, where anything can happen. Who knows -- maybe even something!” -Stephen Colbert

“It’s almost like shoving everything you want into one gigantic $4 trillion package doesn’t work.” - James Corden

“Republicans aren’t making it any easier, of course. They’ve already deployed their go-to weapon that always stops the Democrats from getting things done: other Democrats.” - James Corden

On reaching the deal to raise the debt ceiling for two months:  “This means America will remain solvent and free from financial calamity. Until December 3rd.” - Stephen Colbert

On The Congressional Baseball Game

Amid the turmoil in Washington, the annual Congressional Baseball Game went ahead as scheduled, with President Biden and Speaker Nancy Pelosi in attendance. 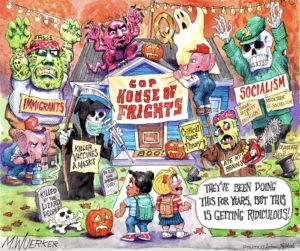 “It was just baseball, no politics, until the Republican catcher went nuts about having to wear a mask.” - Jimmy Fallon

“It was a real nail-biter. In the eighth inning, I got a text from Pelosi saying, ‘We’re down by one run and only your donation of $26 can turn this around.’” - Jimmy Kimmel

“President Biden stopped by for the game, although it was a little creepy when he left by disappearing into a cornfield.” - Jimmy Fallon

“He also spent some of the game working the phones, and then Biden left the park about an hour after he arrived. That has big absent dad vibes: [imitating Biden] ‘You look great out there, kiddo. Daddy’s just on a work call.’" - Stephen Colbert 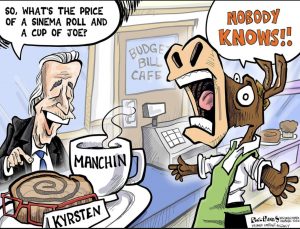 “The Republicans beat the Democrats 13-12, but only because Kyrsten Sinema refused to tag anyone out.” – Seth Meyers

“The Dems had a chance for a big win, but in the bottom of the ninth, Joe Manchin wrote a letter cautioning that it would be irresponsible to score.” - Stephen Colbert

In a new book out by a former Trump White House Press Secretary, Stephanie Grisham reveals that Trump's mysterious visit to Walter Reed Medical Center in 2019 was for a colonoscopy and that Trump stayed conscious for the procedure, in part to keep late night television hosts from finding out and making fun of him.

“I have to say, it gives me a lot of satisfaction, as a late night talk show host, to know that he opted to stay awake while they augered his innards with a sewer snake specifically because he didn’t want us making fun of him,” said Jimmy Kimmel. 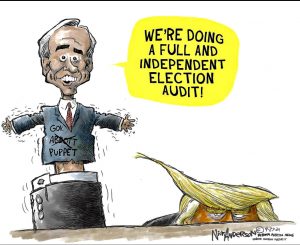 Kimmel said he felt cheated, finding out such vital information so late in the game: “Because when a president, especially this president, gets a colonoscopy, it is my duty — that’s right, duty — to make jokes about it:

“The president’s doctor decided to schedule this procedure after the White House toilet killed itself.

“It took a while because the doctor kept accidentally sticking the camera in his mouth.

“As soon as they switched the camera on, Trump turned around and said ‘Hey doc, how are the ratings?’

“The doctors said the hardest thing about giving Trump a colonoscopy was getting the camera around Mike Pence’s nose.” - Jimmy Kimmel

“Yeah, colonoscopy was no big deal -- they only found three polyps and Rudy Giuliani.” - Jimmy Fallon

“Oh, my God, that had to be terrible -- for the doctor who had to give a colonoscopy while the guy on the table kept screaming about how he won Michigan.” - Stephen Colbert

On Jonathan Karl’s new Trump tell-all, “Betrayal,” which details Trump’s bragging about the size of the crowd that stormed the capitol.

“Size matters so much to him. It’s almost as if he’s insecure about something.

“Someday he’ll be looking up from the bowels of hell, elbowing his buddy, Jeffrey Epstein, saying, ‘Can you even believe how many people are dancing on my grave right now?’” - Jimmy Kimmel

Which included a “whistleblower” testimony before Congress and a six-hour blackout on Facebook's platform.

“It’s the kind of week you normally post about on Facebook,” adding that the social media giant had it even worse than the Yankees, who lost their wild-card game Tuesday and were knocked out of the baseball playoffs. - Seth Meyers

“Ladies and gentlemen, I come to you tonight from a room full of warriors. Heroes. Survivors. Forget World War II, this is the greatest generation, because yesterday, every single person in this room had to dig down deep within themselves and find the strength to make it through Facebook’s six-hour worldwide outage.” - Stephen Colbert

"Facebook said that no user data was compromised during the blackout. It was not a hack, all your information is safe with them: your age, your height, weight, eye color, blood type, your birth date, your hopes, your dreams, your kidneys — all totally secure in the Facebook vaults.” - Jimmy Kimmel 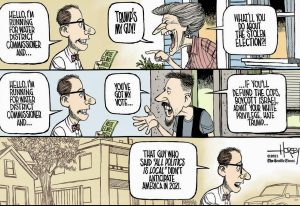 "The blackout was followed by a devastating congressional panel investigation. Democrats and Republicans in the Senate finally found something they can agree on: They both hate Facebook.” - Jimmy Kimmel

“That’s right, a Facebook whistle-blower testified for more than three hours in front of Congress and said some pretty damaging things. The whistle-blower said Facebook has repeatedly misled the public and that is not OK. We already have an app for misleading the public — it’s called Tinder.” - Jimmy Fallon

August 19, 2022 We are now 80 days out from the midterm elections! DemList has posted the 2022 Election Calendar on our site, which includes all US Senate, House, and gubernatorial primaries...