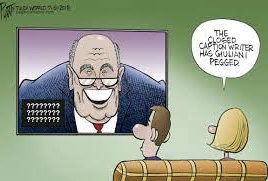 ‘I’m not saying Rudy was drunk, but that’s usually when guys from Brooklyn start to imitate the queen of England.’ - Seth Meyers

“You know your speech went off the rails when people watching it are like: ‘I wish this guy would talk more about 9/11. What is he doing?’” - Trevor Noah

“I guess Rudy can add this tape to his reel of impressions if he ever auditions for ‘America’s Not Talent.’” - Seth Meyers 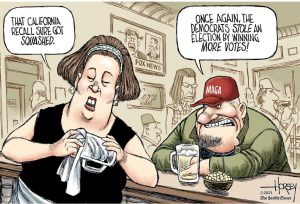 On the California Recall Results

“The race was called for Newsom less than an hour after the polls closed. Less than an hour. Amazing how fast an election can end when Rudy Giuliani isn’t involved, isn’t it?” - Jimmy Fallon

“California Gov. Gavin Newsom yesterday defeated a recall attempt by a nearly 2-to-1 margin, and Newsom was so relieved, his hair unclenched.” - Seth Meyers

“Did he win? Can you win an election you didn’t want to happen?” - Jimmy Kimmel 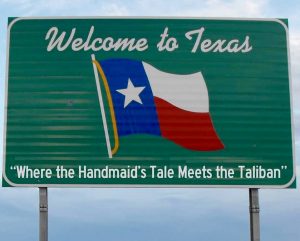 “Sorry California Republicans, I know you spent 20 months and millions of dollars on this recall, but you know what they say.: You win some, but not in California.” - Stephen Colbert

“The cost to our state was about $300 million, which I think is the third-most-expensive dinner at French Laundry ever.” - Jimmy Kimmel

“In fact, there were three options on the ballot that said ‘yes,’ ‘no’ and ‘This is a bigger waste of time than driving into L.A.X.’” - Seth Meyers

“In a 5-4 decision, the court’s conservative majority said they had 'serious questions regarding the constitutionality of the Texas law, but refused to block it due to 'complex' and 'novel' procedural questions. But isn’t answering complex and novel procedural questions all we pay you knuckleheads to do?” - Stephen Colbert 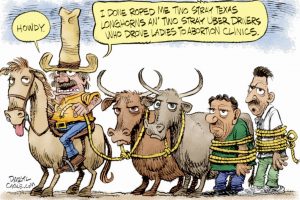 “They’re incentivizing neighbors to turn on each other for cash. Bad news for fans of privacy rights, but great news for The Handmaid’s Tale, which just got a late Emmy nomination for best documentary.” - Stephen Colbert

"What a weird summer – Britney is free and every woman in Texas isn’t.” - Jimmy Kimmel

On President Biden’s new vaccine requirements for federal employees and companies with more than 100 employees.

“And, of course, a lot of people are upset about this. They don’t want to be told what to do -- not even by the doctors who they will eventually rush to to beg for help when they get sick.” - Jimmy Kimmel 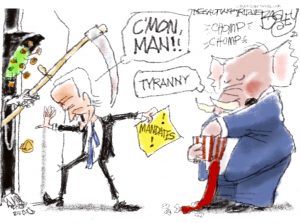 “Vaxxed and waxed. He wants his mailmen smooth.” - Jimmy Kimmel

“This really does feel like when your dad stops threatening and actually does turn the car around.” - James Corden

“Biden laid out a six-pronged strategy. And apparently one prong is building a border wall between the U.S. and Florida.” - Jimmy Fallon

“Maybe they should have a separate airline for people who won’t wear a mask: JetFlu.” - Jimmy Kimmel

“In a company memo, the CEO of Delta Airlines refused to use the term ‘Delta variant’ and only referred to the virus by its scientific name. I guess that explains why pilots have been saying, ‘Welcome aboard to B16172 Airlines.” He’s doing anything he can to distant Delta from the variant. Today he announced that, from now on, our airline will be pronounced ‘Del-ta(y).’” - Jimmy Fallon

On people taking the horse deworming drug, ivermectin, to try to treat covid-19

“Biden said it’s time to stop horsing around — and then he was like, ‘No, seriously, stop taking horse medicine.’” - James Corden 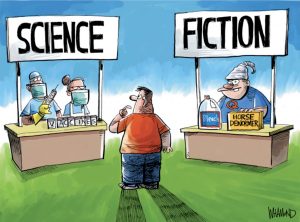 “Normally, when you hear the phrase ‘horse pills,’ you think it’s a euphemism, but in this case, it’s literal horse pills." - Seth Meyers

“But, still, I don’t know, like a quarter of the country thinks herd immunity means they should be taking livestock medicine instead of the vaccination…

“Poison-control centers across the country have seen a spike in calls from people taking livestock medicine to fight the coronavirus, but they won’t take the vaccine, which is crazy. It’s like if you’re a vegan and you’re like, ‘No, I don’t want a hamburger -- give me that can of Alpo instead.’” - Jimmy Kimmel 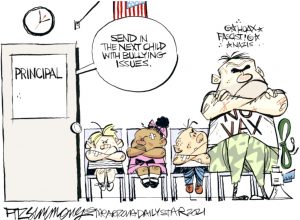 “You know someone at the company that made Ivermectin once said, ‘Hey, should we put 'not for people' on the horse pill labels?’ and someone else said, ‘There’s a picture of a horse on the bottle, it’s fine!’” - Seth Meyers

“So you will probably still get Covid, but on the bright side, you could win the Preakness.” - Stephen Colbert

“You know who the real victims are here? The horses who can’t get their worm pills.” - Seth Meyers

On the Biden administration's removal of 18 military academy board members that were appointed by Trump, "including haunted Dollar Store Barbie doll Kellyanne Conway. There’s a name I haven’t said in a while: Kellyanne Conway. I’m not gonna say it any more times. I’ve seen ‘Candyman.’ I know what might happen.” - Jimmy Kimmel 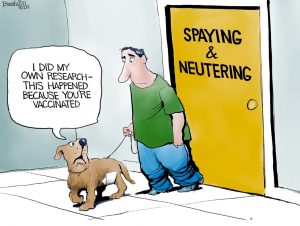 "Why were there still any Trump holdovers anyway? That's like moving into a rent-controlled apartment the last guy died in and keeping all the expired whitefish in the refrigerator." - Seth Meyers

SignUp for the Dailys.

July 31, 2019 Round one of the second Democratic presidential debate was a much more disciplined, substantive and passionate event than debate one, providing a voice for all the contenders in a...