On the Senate's passage of Biden's $1.2 trillion infrastructure bill
Nineteen Republicans joined all Senate Democrats in favor of the measure. "The last time that many Republicans crossed the aisle in Congress, it was to steal Nancy Pelosi's podium." Even the Senate minority leader, Mitch McConnell, voted for the legislation, which made sense, since "trolls love bridges." - Stephen Colbert 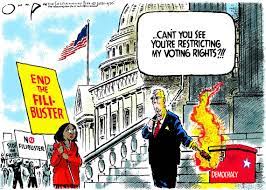 "That's right, a trillion dollars to fix our roads, bridges and airports, so after they finish LaGuardia, that'll leave us with about 40 bucks." - Jimmy Fallon

The measure was approved after a rapid-fire series of votes called a "vote-a-rama" that lasted more than 14 hours. Some Senators even brought extra padding for their chairs to make the time more comfortable. "The chairs were padded with only the softest material - cotton, goose down, Ted Cruz's spine." - Stephen Colbert 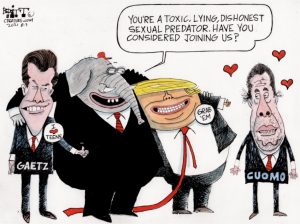 "Don't let the door hit you on the butt on the way out. But if it does, that door should also resign." - Stephen Colbert

Cuomo's accusers included former members of staff and a state trooper. "So, he harassed only two types of women - those who work for him, and those who do not." - Stephen Colbert

"It's gonna be tough for Cuomo. With a track record like this, his only future is either president or Supreme Court justice." - Jimmy Fallon

"Hochul will be taking the seat vacated by Cuomo - hopefully, after putting a towel down first." - Stephen Colbert 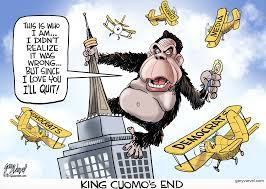 In the press conference announcing his resignation, Cuomo stopped short of contrition or humility. "In my mind, I've never crossed the line with anyone. But I didn't realize the extent to which the line has been redrawn." "Cuomo sounds like he's trying to talk a traffic cop out of giving him a ticket for parking in a fire lane - 'I swear, when I parked the line was over there, and now you're telling me it's over here!' - Seth Meyers

"I don't know exactly what line he's talking about, but hopefully he'll explain it in his new book Andrew and the Purple Crayon." - Stephen Colbert

On Republicans, including Senate Minority Leader Mitch McConnell, finally urging Americans to get vaccinated
"Wow. I've got to say - and I hope no one ever takes this out of context - I agree with Mitch McConnell," said Stephen Colbert. "The rising cases are being fueled by vaccine hesitancy, which itself is being fueled by a dangerous pathogen scientists are calling the Republican Party." 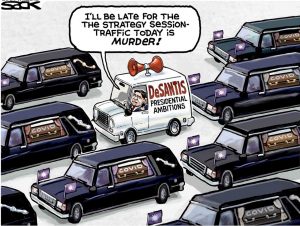 "Inoculations have slowed dramatically, and less than half of the total US population is fully vaccinated. So if you think of it like a pie, about half of the pie would be vaccinated while the other half wouldn't be able to taste the pie because they have Covid." - Stephen Colbert

In contrast, in Florida, where the number of Covid cases are surging once again, Republican Governor Ron DeSantis, has threatened to withhold pay from any school officials who require masks indoors. "I'm nervous about DeSantis," said Jimmy Fallon, "I mean, right now, people in Florida are like, 'When can Cuomo start?'"

On Ben & Jerry's decision stop selling ice cream in the Israeli-occupied territories
Noting that this had upset Republicans like Senator James Lankford of Oklahoma, who called on his home state to block sales of the brand, Seth Meyers said, "Cool, they're fighting with ice cream now. What's next, going to accuse Mayor McCheese of voting twice in Arizona?" 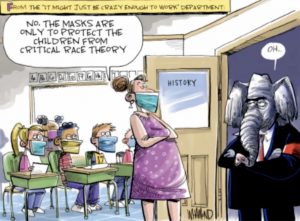 Meyers ask why he doesn't have his own Ben & Jerry's flavor, unlike his competitors Jimmy Fallon ("The Tonight Dough") and Stephen Colbert ("Stephen Colbert's AmeriCone Dream"). After numerous calls, B&J interns called Meyers and said, 'We already have a flavor named after you - it's called vanilla.'" 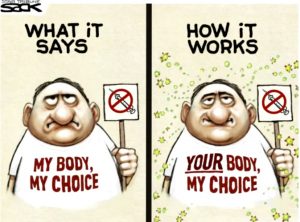 "That's right, pop star Olivia Rodrigo made a surprise appearance at the afternoon press briefings. It was almost as surprising as when Sarah Sanders would appear at one.