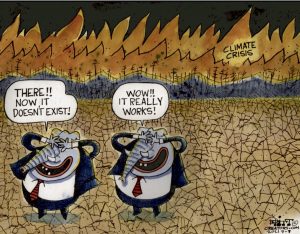 On the national heatwave caused by climate change
"it's so hot, the Statue of Liberty dropped the toga...Do we by any chance have something that can stop climate change? Because I switched to paper straws a year ago and I don't think they're working." - Stephen Colbert

On Senate Republicans blocking the For The People Act
"The Senate voted to block the For the People voting rights bill, but not until they got their voting paperwork in order. Let's see, I got my license, passport, tax returns, high school yearbook. OK, I think I'm ready for my riddle." - Seth Meyers

"The Republicans instead supported the 'For Some of the People - We Can't Say It Out Loud, but You Know Which Ones We Mean - Act.'" - Stephen Colbert 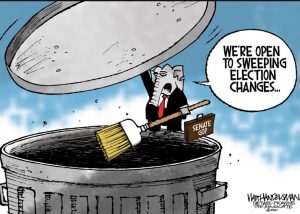 "Yep, Democrats wanted things like automatic voter registration and Election Day to be a national holiday, while Republicans wanted every polling place to be at a yacht club." - Jimmy Fallon

"Yes, the Senate's founding purpose: to do nothing. It's right there in Article I: 'All legislative powers herein granted shall be vested in a Congress of the United States, which shall consist of a Senate, where one wizened, ancient turtle man, with no regard for anything but the self-preservation of his own power, shall, with his pockets stuffed with greasy bags full of money, strangle the hope of all who dare to dream of true democracy, and recognize April as National Jazz Month.'" - Stephen Colbert, on Mitch McConnell saying the Senate was fulfilling its "founding purpose."

On the reversal of Bill Cosby's conviction
Cosby was released on a technicality that stems from a 2005 agreement with then prosecutor Bruce Castor. "If the name Bruce Castor rings a bell, it's because he's the same paragon of legal ethics who went on to represent the former president during his second impeachment trial...His business card just says: Bruce Castor, Actual Devil's Advocate." - Stephen Colbert 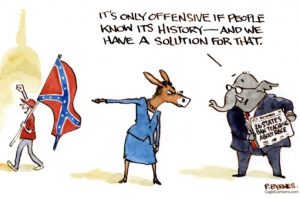 "Got no idea what's next for Cosby. My guess is he's going to join Bill O'Reilly and the former president" on a 'Monsters of Being Monsters' tour." - Stephen Colbert

On the Manhattan D.A.'s criminal investigation of the Trump Organization
"Here in New York, the Manhattan D.A.'s office is putting pressure on Trump underlings to get them to flip on the boss. Now they're turning the screws on his former bodyguard, a guy who looks like he'd be named Matthew Calamari...'(which) sounds like a name a cop makes up when he's undercover at Olive Garden: [immitating police officer] 'Yeah, yeah, I'm Matthew - Matthew Calamari, and this is my buddy, Larry Unlimited Breadsticks.'" - Stephen Colbert 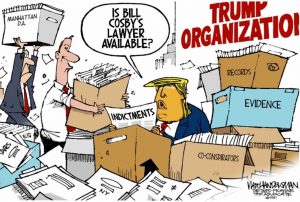 Colbert tentatively celebrated the news that the Trump Organization and its chief financial officer, Allen Weisselberg, were charged with a "sweeping and audacious illegal payment scheme" of tax-related crimes.

As the audience burst into applause, Colbert said, "I want to join you in that feeling, but I've been hurt too many times. First I fell in love with the Mueller report, then I bounced back with the first impeachment, then I gave love one more chance with the other impeachment, and I just hurt, you know?...Nothing sticks to this guy. I'd call him Teflon Don but I'm pretty sure that coating is deck sealant."

On Guiliani's law license being stripped
"Speaking of New York, the state just suspended Rudy Giuliani from practicing law because of his repeated false and misleading statements about the election. Even Rudy was like, 'What the hell took you so long?'" - Jimmy Fallon 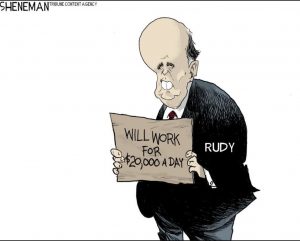 "You know you've crossed the line when other lawyers are, like, 'This guy lies way too much.'" - Jimmy Fallon

"This is a dramatic fall from grace. In the city he was famously the mayor of, Rudy Giuliani can no longer practice law. And if the last year has proven anything, it's that when it comes to law, Rudy needs a lot of practice." - Stephen Colbert

On the forthcoming book by Washington Post journalists that provides new information about the Trump administration's response to the coronavirus pandemic.
"The main detail: There wasn't one." - Stephen Colbert

According to the book, early in the pandemic Trump suggested sending Covid-infected American cruise ship passengers to the Guantánamo Bay naval base in Cuba to avoid adding to US cases. "The president wanted to send cruise ship passengers to Gitmo, so enjoy your beach day with a complimentary head sack, then hit the bar for bottomless piña colada boarding." - Stephen Colbert

"They say (Trump) was very upset about Covid testing because he believed that positive tests would look bad and hurt his chances of re-election. He had a call with (HHS Secretary) Alex Azar and he demanded to know what 'idiot' decided to make the federal government do testing, and Alex Azar was like, 'Uh, do you mean Jared?'" - Jimmy Kimmel

"Imagine being in that administration and someone calling you 'the idiot.' That's like being in the N.B.A. and your nickname is 'the tall guy.'" - Stephen Colbert

On The Biden-Putin Meeting in Geneva
"That's right, President Biden and Russian President Vladimir Putin met in Geneva for about four hours with a few breaks, but no meals because nobody would volunteer to be the food taster." - Seth Meyers

"The meeting was expected to be five hours, but lasted only half that time. Not a great sign when your summit is barely longer than 'Peter Rabbit 2.'...It was pretty much the opposite of the 'Friends' reunion." - Jimmy Fallon

On reports that, in 2019, Trump asked advisers what the DOJ and other federal institutions could do "to probe or mitigate 'S.N.L.,' Jimmy Kimmel and other late-night comedy mischief-makers."
"I don't want him probing me." - Jimmy Kimmel

"They say this happened near the beginning of the year, that was right around the time he had a summit with Kim Jong-un. Maybe he got the idea from him. I could be dog food right now. I'd be like, 'Alec Baldwin's the one you want - he dressed up as you.'" - Jimmy Kimmel 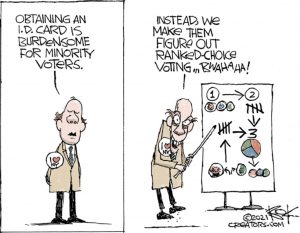 "President Snowflake asked to send the authorities in to stop us from making fun of him. Not only that, he wanted Guillermo to pay for the wall." - Jimmy Kimmel

"Why do I get lumped in with 'other comedy mischief-makers'? I don't get it! What's a guy gotta do? All due respect to my dear friend James Tiberius Kimmel, but if the D.O.J. thugs are kicking down doors to round up the late-night chuckleheads to drag us off to Mar-a-Gulago to be assassinated, I should get more than 'and the rest.' I do not appreciate the 'Mary Ann and Professor' treatment here!" - Stephen Colbert

"It's strange. There has not been a presidential overreaction like this since Nixon sent Navy SEALs to assassinate the Smothers Brothers." - Stephen Colbert 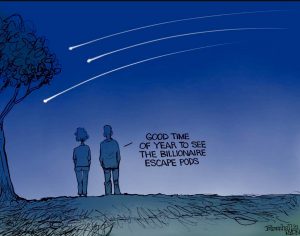 Farewell Conan, for now
After 28 years on late night and 11 years on TBS, Conan O'Brien is moving on to HBO Max. He bade farewell, thanking the network, producers, writers, family and fans.

"So my advice to people watching out there right now - it's not easy to do. It's not easy to do, but try - try and do what you love with people you love. And if you can manage that, it's the definition of heaven on earth. I swear to God, it really is." - Conan O'Brien