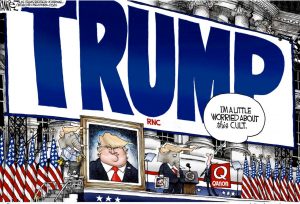 On QAnon March 4th Conspiracy Theory
Security is ramped up in DC due to the threat of violence around the QAnon conspiracy theory that March 4th would be Donald Trump's true Inauguration Day.

"Now, I'm no psychologist, but you could say they're suffering from 'March Madness.' Also, they're clinically insane." - Stephen Colbert

"How many more times are these people gonna prepare for a victory that doesn't come? I don't know who 'Q' is, but he's definitely a Clippers fan." - Jimmy Kimmel

"In a way, I understand - the deeper you fall into something, the less you want to admit you were duped, you know? Which makes you even more desperate to keep the fantasy going. I mean, that's why I'm sure that the next Kanye album is gonna be great again. It has to be great.'" - Trevor Noah 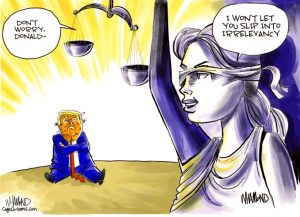 "That's right, the Manhattan district attorney's office confirmed that it's in possession of Trump's tax records, as evidenced by the white smoke coming from the Statue of Liberty's torch." - Seth Meyers

"I wonder how many pages of the Cheesecake Factory menu he snuck in there." -  Jimmy Kimmel

"And look, I'm no prosecutor, but it can't be that hard to find a crime in the tax records of a guy who claims to be a billionaire, yet paid only $750 in federal income taxes when he was president." - Seth Meyers

"But this really is big news, because after they thoroughly go through each document, Trump could be charged around the year 3000." - Jimmy Fallon 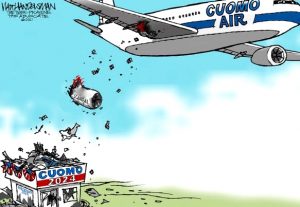 On Cuomo Sexual Harassment Allegations
This week a third woman accused Governor Andrew M. Cuomo of New York of sexual harassment, saying he made an unwanted advance on her at a wedding in 2019.

"And the craziest part is there's a photo of it. Very rarely does a wedding photographer capture anything interesting at all, but this one did." - Jimmy Kimmel

"And it's not like this happened in 1992, and he could be like, 'Well, it was a different time.' This was in 2019. If you're a public official doing this kind of thing after the #MeToo movement, either you just can't help yourself, or you're so dumb you shouldn't be in office anyway." - Trevor Noah

"In the span of one month, Andrew Cuomo has somehow done the impossible: He made Bill de Blasio the second-most-hated politician in New York." - Jimmy Kimmel

On cancellation of six Dr. Seuss books because of offensive language 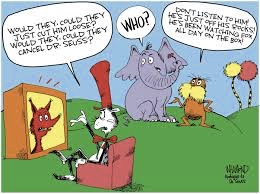 "Wow, OK, so what? We're just going to cancel Dr. Seuss books just because they're racist? Uh, then what are the racist kids going to read, huh? You didn't think of that, did you?" - Trevor Noah

"The real problem with Dr. Seuss is that all of his made-up words sound like they could be racial slurs. I mean, 'a Zelf on the Shelf'? 'The Nupboards in the cupboards'? [expletive], I don't know what that means, but if a white person called me a Nupboard, we're throwing down." - Trevor Noah

"And not only are they pulling some books out of print, they're also tweaking some of the books that are in print to make them more inclusive. For instance, we now have 'The Cat in the Problematic Headdress,' 'How the Grinch Appropriated Native American Culture,' 'Hop on Pop, With His Consent,' 'Horton Hears a They,' 'Horton Hears a Misogynist Joke and Reports It to H.R.,' 'There's a Wocket in My Ethically Sourced Sustainable Pocket,' 'No Eggs or Ham' - that's a vegan thing, I guess - and 'Yertle the Gender-Fluid Turtle, and Other Stories.'" - Jimmy Kimmel 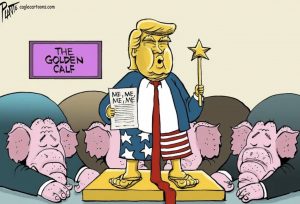 On The Trump-Pence Patch Up
Mike Pence was reported to have told a group of conservative lawmakers last week that he and Donald Trump still had a "close personal friendship."

"Obedience school seems to be working well for Mike Pence, who has apparently patched things up with his former owner, Donald Trump," - Jimmy Kimmel

"Staying loyal after he sent a mob to kill you? Man, that shows how committed Mike Pence is to his principles: he won't even abort a friendship." - Trevor Noah

"And I don't know where the line is between forgiving and being a doormat, but Mike Pence crossed it a long time ago. I mean, yeah, the Bible says to turn the other cheek, but at the same time, one of the Ten Commandments is 'Thou shall not be a [expletive].'" - Trevor Noah

"You know what would be fun? If I were Donald Trump, I'd announce that I need a kidney, and I'd make all of these guys - Lindsey Graham, Rudy, Mike Pence - I'd make them all give me one kidney to choose which one I like best." - Jimmy Kimmel 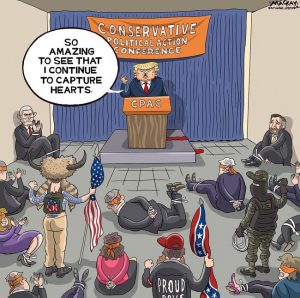 "I didn't know America was canceled. Although, I'm not surprised - the last season was pretty unbelievable." - Stephen Colbert

"It's like Comic-Con for neo-cons and neo-Nazis, too." - Jimmy Kimmel

"It's a who's who of 'Who needs that many guns in their rec room?'" - Stephen Colbert

"According to CPAC, 'It's time to stand up for Americans whose views have gotten them canceled,' which is why they kicked things off by canceling an appearance from one of their panelists for a history of making anti-Semitic claims. Good - conservatives don't want to be associated with anyone like that. It could sully the good name of the mob with aluminum bats trying to murder Mike Pence." - Stephen Colbert

"It was a Murderers' Row of people who were OK with Mike Pence being murdered." - Stephen Colbert 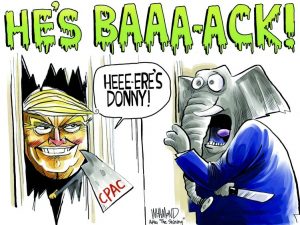 "The headliner of the weekend was the former president...He told the audience that he would not start a third party. Of course he isn't going to start a new political party - he already owns one." - Stephen Colbert

"Trump said 'Did you miss me?' which is literally what every movie villain says when they come back." - James Corden

"I watched CPAC and 'WandaVision' this weekend, and I'm not sure which characters are living in a more warped reality." - Trevor Noah

"As you would expect, the crowd to see Trump was very white. They basically made the Hollywood Foreign Press look like the cast of 'One Night in Miami.'" - Jimmy Fallon

On the Hollywood Foreign Press' Golden GLOBE awards and their all-white board
"The Golden Globes are the opposite of CPAC in every way, except for they don't have any Black people on the board. That's what they have in common - otherwise they are very different." - Jimmy Kimmel 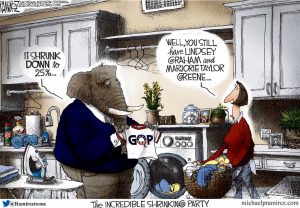 "You know you've got representation problems when the Proud Boys have more Black members than you." - Trevor Noah

"Explains why in past years they've given Golden Globes to 'Green Book' and Hellman's." - Stephen Colbert

"This year's looks ran the gamut from Cynthia Erivo in Valentino and Nicole Kidman in Louis Vuitton all the way to Jason Sudeikis in tie-dye hoodie. You can shop Jason Sudeikis's look by digging into the bottom of your hamper and then taking that edible you've been saving for an emergency." - Stephen Colbert