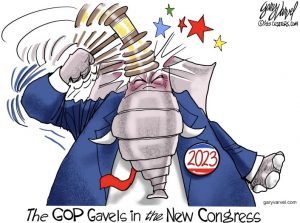 A Special GOP/Kevin McCarthy Edition
Jimmy Kimmel mocked the GOP’s embarrassing first day of Congress, in which they took control of the House, “this time without breaking and entering.”

After four days and 15 rounds of voting, the new GOP majority swore Kevin McCarthy in as Speaker of the House of Representatives last Saturday morning.

During the multiple votes, Stephen Colbert pondered, “Why does he keep going? I’m beginning to think losing floor votes might be his kink. He’s getting off on this. And it’s all in the new congressional erotica novel Fifty Shades of Nay.” 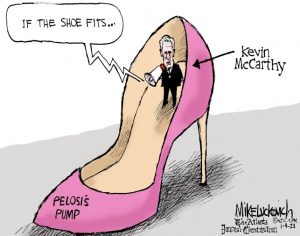 “It’s like getting all the way up to the altar and then your fiance says ‘I don’t,’ and instead of going home the priest says ‘what do you say everybody, should we try it again?’ - Seth Meyers

McCarthy, a longtime Trump supporter, was “caucus-blocked” by the Freedom Caucus, a group of far-right Republicans who view him as not far-right enough. Nevertheless, McCarthy already moved his stuff into the speaker’s office before the marathon votes were completed, “which is like showing up for a Tinder date with a toothbrush.” - Jimmy Kimmel

Relishing the McCarthy speakership drama, Kimmel said, “I can’t wait for Lin-Manuel Miranda to make a musical out of it,” but “I’m worried about Nancy Pelosi, I don’t know if it’s healthy for a woman her age to laugh so hard for so long.” 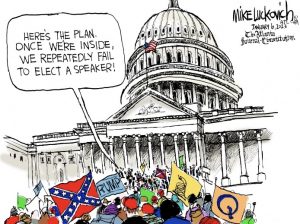 “Things really started to spin out on the floor of the House. It got so out of control, I thought I was watching the Oscars.” – Jimmy Kimmel

Kimmel called it “a full Ali-Frazier,” saying “it was the political equivalent of handing your kid an iPad to shut him up.”

“Ahead of the last round of voting for House speaker, Alabama Congressman Mike Rogers appeared to charge at fellow Republican Representative Matt Gaetz. And, out of habit, Gaetz yelled ‘I’ve never even met your daughter!’” – Seth Meyers

“That’s a face mask violation -- 15 yards. It was really the most exciting hour of cable news in quite some time.” – Jimmy Kimmel 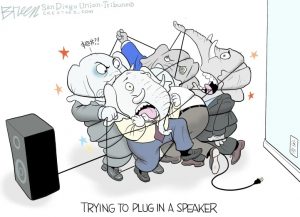 “Republicans resorting to violence on the House floor? What a perfect way to honor the two-year anniversary of January 6.” – James Corden

“I have to admit, it’s fun to watch these animals stabbing each other in the back. It’s like the House of Cards, but everyone is Kevin Spacey.” - Jimmy Kimmel

“I can’t even imagine what McCarthy was going through. It must have felt like sitting outside Applebee’s and waiting four days for your disc to buzz.” – Jimmy Fallon 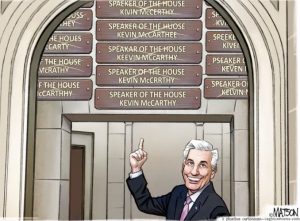 “McCarthy was stuck in some sort of nightmarish existential purgatory like the waiting room scene in ‘Beetlejuice,’ you know, but next to someone scarier than anyone in that movie.” – Seth Meyers, referring to Representative Matt Gaetz

“We have a new, not improved, but we have a new speaker of the House.” – Jimmy Kimmel

“They chose McCarthy the same way you choose Thai food on New Year’s Day: ‘You guys want Thai? Well, nothing else is open!’” – Seth Meyers 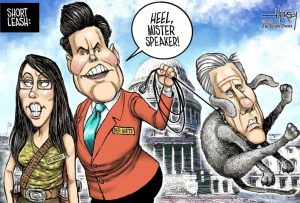 One of the concessions McCarthy made to the ultra-right faction of his own party was “a change to the rules that would make it easier to remove him. You know it’s bad when the only way you can get hired is if you promise to get fired, you know what I’m saying?” – Jimmy Fallon

“How could they possibly make him any weaker? They’re already treating him like a substitute teacher on the last day of school. Are they gonna make him wear the ‘kick me’ sign on the front?” – Seth Meyers

“McCarthy is so unpopular, even Southwest Airlines feels bad for him, you know?” – Jimmy Fallon 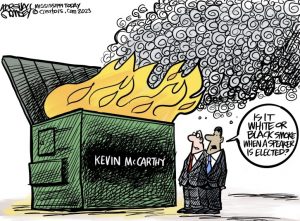 “After 15 rounds of voting, McCarthy pulled off the impossible -- he got people to watch C-SPAN for an entire week.” – Jimmy Fallon

“McCarthy was like, ‘I’m just glad it didn’t go to a 16th vote. That would have been humiliating.’” – Jimmy Fallon

“Who would’ve guessed that a bunch of insurrection apologists would have trouble certifying a vote?” - Jimmy Kimmel

“You guys can’t even have a red wave amongst yourselves.” – Seth Meyers

January 4, 2023 The highly contentious fight for the Speaker of the US House of Representatives, unprecedented in modern American history, continued without resolution today — holding the...