On Trump's 2024 presidential campaign announcement
“The moment none of us have been waiting for.” – Jimmy Kimmel

“Donald Trump made a big announcement at Mar-a-Lago surrounded by dozens of his closest friends and thousands of classified documents.” – Jimmy Kimmel

On reports that security personnel blocked people from leaving before the event was over, Trevor Noah joked that you know a club is bad “when you need a bouncer to keep people in...Say what you will about Trump, but the man takes his border security seriously: [imitating Trump] ‘Nobody’s getting out. We’re gonna build a wall. Build a wall, keep them in.’”

“It was like a room full of Melanias, begging to be set free.” – Jimmy Kimmel 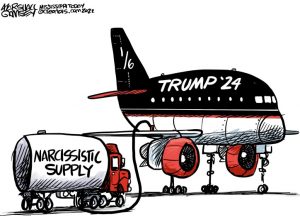 “Always a sign of a successful event: ‘OK, take your seats. The piano recital will start shortly. Please silence your cell phones. The doors are locked from the outside. Clap loudly. We have your family.’” – Stephen Colbert

“Trump supporters have never really let silly things like doors or security stop them getting somewhere before.” – James Corden

Jimmy Kimmel referred to Trump’s campaign as “a bid to become the first American to lose the popular vote three times in a row.”

“One of the reasons he’s running again is to try to slow down the many, many criminal investigations he’s at the center of right now. He’s basically a bank robber on the run from the cops and the White House is a dumpster behind an Arby’s he’s trying to hide in.” – Jimmy Kimmel

“He’s running for the same reason every shirtless guy on ‘Cops’ runs -- the po-po is chasing him.” – Trevor Noah

“What a moment. You can really feel the indictment -- I mean, excitement.” - Jimmy Fallon

“Yep, Trump made the big announcement from Mar-a-Lago, or, as it’s also known, the summer home of the National Archives.” - Jimmy Kimmel 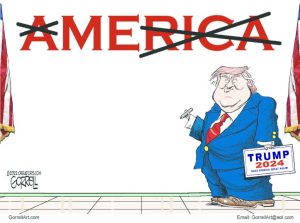 “I’m pretty sure this is the first presidential campaign to be kicked off from an active crime scene.” - Jimmy Fallon

“Trump made the announcement at 9pm, so if you heard a weird sound shortly after that time, don’t worry, that was just the sound of millions of people just breathing in and out into paper bags.” - James Corden

“Trump doesn’t even know what that means. He thought he was casting a Harry Potter spell on him.” - Jimmy Fallon 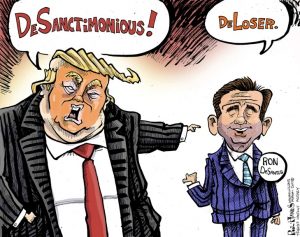 “You saw that, breaking out a classic Trump nickname. I mean, at least we think it was a nickname. It could’ve just been Trump trying to say ‘DeSantis.’” – Trevor Noah

“Good for Mike Pence! Telling Donald Trump, ‘You almost got me and my family killed, which is why I’m now prepared to say that it’s possible there are better alternatives to you in the next election, although that decision will be up to the American people.’ You tell him, Mike Pence!” – Trevor Noah

“For real though, man, it’s a simple question: Do you support Trump or not? I can’t believe Mike Pence is the one leaving us hanging.” – Trevor Noah 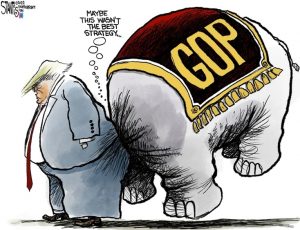 “He doesn’t want to go too hard against Trump, because he’s still hoping to win over Trump’s voters if he runs for president, which is so delusional. Trump’s people were the ones who wanted to kill him. The only reason they would elect him president is so they know for sure where he lived.” – Trevor Noah

Election Night Reflections
“In the Florida governor’s race, Democrat Charlie Crist has been defeated by MAGA wannabe and 2024 hopeful Ron DeSantis. And now, in accordance with Florida law, Charlie Crist will be forced on a plane and flown to Martha’s Vineyard.” - Stephen Colbert

“You know, Matt Gaetz easily won his seat in Florida. Florida’s a state in which being an alleged sex offender makes you an experienced public servant.” - Jimmy Kimmel 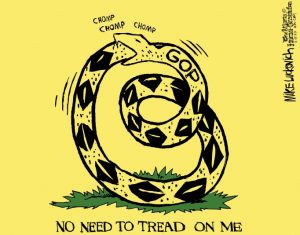 “Now, one of the biggest races that everyone has been watching is in Georgia, between Raphael Warnock and Herschel Walker. It is so tight, this race could be decided by a margin of error of plus or minus Herschel Walker’s secret children.” - Stephen Colbert

“I would say it was less like a red wave and more like a red wedding. The Republicans were the Starks, and Donald Trump was a dragon who burned his whole [expletive] party to a crisp.” - Seth Meyers

“It’s like what happens when you accidentally wash your Klan robes with your MAGA hat. Just a little pink -- a pink wash.” - Stephen Colbert

“Though the GOP is picking up seats in the House, so far it does not look like a red wave. Perhaps -- perhaps too early to tell. Perhaps a pink trickle. They should really have that checked out.” - Stephen Colbert

“Whatever happens, it was less a red wave and more of a purple nurple.” - Jimmy Kimmel

April 30, 2018 The wave of women running for office in 2018 continue to break records, with the number of female Democratic candidates outnumbering Republicans four to one. Although numbers vary...