Posted September 23, 2022 | by KimS | in DemDaily, Humor Round Up, Trump Administration, Trump Organization

“If you told DeSantis to spend the same amount of money helping these asylum seekers, he’d be like, ‘Oh, we don’t have the funding for that,’ but to troll the Democrats, suddenly he’s like, ‘Put it on my card, yeah!’” - Trevor Noah

“And by the way, America actually has a history of doing this. In the 1960s, racist organizations in the South shipped Black people up to Northern states to make liberals uncomfortable. But Ron DeSantis obviously doesn’t know about that, because the pages in his history books were torn out in his state.” – Trevor Noah

“I guess Ron DeSantis doesn’t know about the Statue of Liberty.” – Jimmy Kimmel

“Ron DeSantis is that guy you went to high school with who desperately wanted to be prom king but didn’t have any charisma, so instead, he just pulled the fire alarm and ruined the dance for everybody.” – Jimmy Kimmel

Former President Donald Trump is reported to have expressed anger over the attention DeSantis is getting for sending migrants to Martha’s Vineyard -- because Trump claims it was his idea.

“Oh man, poor Donald Trump. He is just sitting at home like, ‘You stole my idea! And by the way, stealing stuff is also my idea. Read the news!’” – Trevor Noah

On Trump's mind powers
In an interview with Sean Hannity, former President Donald Trump said he could declassify documents with his mind. “Like Harry Whodummy,” said - Jimmy Kimmel

“He couldn’t even read documents with his brain == how does this happen?” - Trevor Noah

“If Trump actually had the power to change things just by thinking about them, Don Jr. would have turned into a Big Mac 30 years ago.” - Jimmy Kimmel

“I felt like he was this close to using the word ‘abracadabra.’” - Jimmy Fallon

“Trump’s argument is that you can just declassify things in your mind, it’s officially declassified as long as you believe it’s declassified. That’s according to Trump’s newest legal adviser, Tinkerbell.” - Seth Meyers 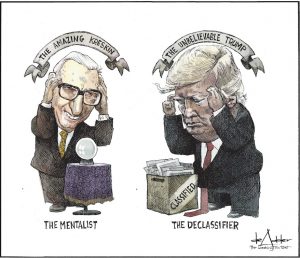 “Hannity was like, ‘Oh, I get it, you’re going to plead insanity.’” - Jimmy Fallon

“I really hope that ‘I can make things happen with my mind’ is going to be the actual argument at the trial. That would be great: ‘Your Honor, the defendant pleads Jedi.’” - Trevor Noah

and Hillary Clinton's emails
“So is Trump saying the FBI. raided his house to find Hillary’s emails? So they didn’t want the documents he declassified with his mind? No, they wanted the emails he couldn’t find but that he actually had the whole time at his house? Because Donald Trump is Hillary Clinton?” - Trevor Noah

“The FBI came to his house looking for Hillary Clinton’s emails that were deleted, which, how could there even be emails if they were deleted, and how would they get into his house? Did Hillary sneak in after midnight and stuff them under his pillow like the email fairy or something?” - Jimmy Kimmel 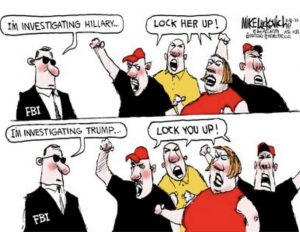 “At that point, even QAnon people were like, ‘OK, that conspiracy seems a little nuts.’” - Jimmy Fallon

“You’ve got to give Trump credit, though. He knows how to say something so crazy that it actually makes the last crazy thing he said seem normal.” - Jimmy Fallon

On the averted rail strike
“A possible national railroad strike was averted after 20 hours of talks between the union’s leadership and labor negotiators from the railroads -- 20 hours of talks that were very annoying to everyone else in the quiet car.” – Seth Meyers

“There’s no way that there could have been a rail strike under Biden. I mean, he rode a train to work every day for 40 years. That’d be like a tanning bed shortage under Trump, you know what I’m saying?” – Jimmy Fallon

On Trump sneaking back to DC
During his unannounced trip to the Washington area, he was photographed on a golf course with his son Eric and several other men --- none of whom had golf clubs.

“Yeah, Trump was smart. He was like, ‘How about nine of us meet on the green with no clubs, so it doesn’t look suspicious?’, said Jimmy Fallon, who called it a “very diverse group,” saying “they had polo shirts of every color.”

“Looked like backstage at a fashion show for Marshall’s.” - Jimmy Fallon

“Trump was like, ‘So, I think I buried the documents somewhere around here. So start -- start digging, boys.’” - Jimmy Fallon

“Whatever it was, it must not have been too important because Eric was there, riding up front with Daddy like a big boy.” - Jimmy Kimmel

More on the Mar-a-Lago docs
Jimmy Kimmel called Trump “the worst ex ever. After four years of putting up with his nonsense, we finally throw him out of the house, he takes 40 boxes of our stuff.”

“These documents -- these are so protected they can’t even be viewed by most members of Trump’s or the president’s national security team. The only people who are allowed to see them are the president of the United States and a few highly cleared members of his council, and anyone who goes into Trump’s closet looking for a broom, I guess.” - Jimmy Kimmel

“Investigators reportedly found the nuclear documents hidden in the club’s storage closet, next to a bag of golf tees, a box of old pool noodles, and Melania, who was hiding in there.” - Jimmy Kimmel

“So this time, the ex-president wasn’t just betraying our country, he brought in another country for a ménage a treason.” – Stephen Colbert

“How do you explain this to our allies? ‘Don’t worry, prime minister, your country’s nuclear secrets are perfectly, safely stored at the Mar-a-Lago waffle bar between the syrup and the Nutella bucket.’” – Stephen Colbert

“Imagine being a guest at Mar-a-Lago and using the bathroom, and out of the corner of your eye you just notice something and you are like, ‘Hang on. Is that -- is that Norway’s nuclear codes?’” - James Corden

“You know, I’ve been trying to understand how he could possibly believe he had the right to take all those documents to his house. It’s weird that a person who barely reads would even want documents. It’s like finding out your dog collects stamps.” – Jimmy Kimmel

DemDaily: The Presidential Inaugural Calendar is Up!

January 8, 2021 The Inauguration of Joe Biden and Kamala Harris as the 46th President and Vice President of the United States is now just 12 days away. To help inaugural organizers and watchers...

December 11, 2017 The fifth and final meeting of the Unity Reform Commission of the Democratic National Committee (DNC) met December 8th and 9th in Washington, DC, concluding with their nearly...