“Can we take a moment to appreciate how many associated with Trump have ended up in prison?” remarked Trevor Noah. “His lawyer, his campaign manager, his deputy campaign chairman, now the chief financial officer of his organization? Usually you have to run a drug cartel to have this many friends doing this kind of time, so at this point it’s basically El Chapo and Donald Trump.

“Now, I know what you’re thinking right now. ‘Surely, if Trump’s second-in-command was committing financial crimes with Trump’s company, then Trump must also be involved in these crimes.’ Well, actually, no. Because, apparently, the story is that he had no idea what was happening in his organization for decades. He had no clue. And that, my friends, is the kind of leadership that makes him fit to be the next president of the United States." 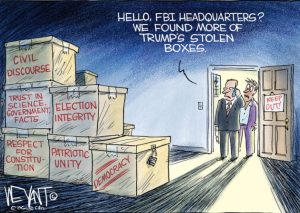 On the FBI’s search of Mar-a-Lago
“The FBI seized 11 sets of classified documents from Trump’s home, including four sets that were marked ‘Top Secret.’ You know Trump just kept those hoping to come across KFC’s secret blend.” – Jimmy Fallon

“Trump says the documents the FBI took from Mar-a-Lago are covered by his white privilege -- wait, excuse me, I mean his executive privilege.” - Desus Nice, guest-hosting “Jimmy Kimmel Live.” “He’s like a racist Jason Bourne, but more orange.”

“Let me just break down Trump’s defense: He says the FBI planted fake evidence to frame him, and now he wants them to return the fake evidence. Even O.J. is like, ‘Yo, bro, you wildin.’ - Desus Nice 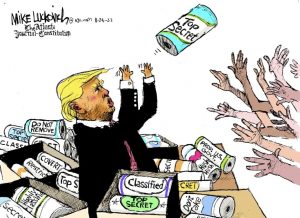 “Now, some are saying Trump could be a flight risk, which is crazy that the former president of the United States is a flight risk. But the good news is that at least Donald Trump’s official presidential portrait is back up at every airport in the United States.” - Al Franken, guest-hosting “Jimmy Kimmel Live.”

“You know, there has never been a better time to visit Palm Beach because for the rest of the summer, Mar-a-Lago is running a special weekend getaway package that includes free breakfast, a room upgrade where available, and a nuclear secret of your choosing.” - Al Franken

On President Biden signing the historic Inflation Reduction Act
"A huge achievement. It makes the single biggest investment in addressing climate change ever. While I’m here, I really should talk about some of the other existential threats facing our nation: the enormous gaps in wealth and income, the threats to our democracy. But I really think one of the most serious issues facing our country today is just how big a [expletive] Ted Cruz is.” - Al Franken 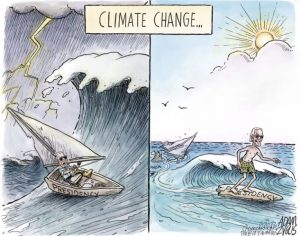 “It does everything. It subsidizes electric cars. It funds wind and solar energy. And it changes the name of summer to ‘extra spring.’ Hopefully, Mother Nature falls for that one.” - Trevor Noah

“Right after he signed the bill, Biden was like, ‘What are those strange sounds?' and a staffer was like, ‘That’s applause, sir.’” - Jimmy Fallon

On Congresswoman Liz Cheney's re-election loss
Cheney’s loss was “the chance for Wyoming Republicans to declare whether they stood with Liz Cheney or with Donald Trump, and they answered bigly.” - Trevor Noah

“The reason everyone was watching this race is because Liz Cheney was running for re-election and of course, Liz Cheney has been the most prominent anti-Trump Republican in Congress. She voted to impeach him; she’s led the committee investigating him. Basically she just will not stop talking about that one time he tried to overthrow the American democracy. That was like, like a million years ago, lady, move on!” - Trevor Noah

“Trump was so excited he threw a ticker-tape parade made out of classified documents.” - Jimmy Fallon

“But the Liz Cheney story isn’t over yet because she’s vowed that she will still do anything to stop Trump from becoming president again, even possibly running against him in the Republican primary. Yeah. It is probably is a long shot, but don’t forget she is a Cheney, and if there is one thing they’re committed to, it’s regime change.” – Trevor Noah

On Trump's Bad Bathroom Behavior
and photos released that were said to show ripped-up notes in the former president’s toilet.

“Not the first time the former president tried to flush something embarrassing. One time, staffers went in there and found Eric.” - Stephen Colbert 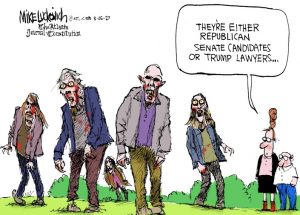 “Of course, when the story broke, the ex-president denied it. (Then) the plot went from one-ply to two, because (NYT Reporter Maggie) Haberman revealed the photos from a White House source, showing some torn-up toilet memos. To be fair, it is unclear if those are official White House documents or his toilet’s suicide note.” - Stephen Colbert

“He even wrote the name ‘Stefanik,’ as in Elise Stefanik, one of the ex-president’s biggest GOP defenders in Congress. If you’re in the MAGA world, that’s huge. Congrats, Elise, heard the president dropped your name.”  - Stephen Colbert

“Wow, even the toilets are writing tell-alls.” - Jimmy Fallon

“Congratulations, Kansas. It’s moments like these I wish I knew which one of the states you were.” - Trevor Noah 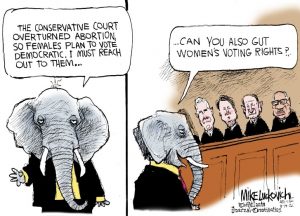 “And may I remind you, Kansas is a state so bright red, it looks like me after 30 seconds on the beach.” - Stephen Colbert

“And this is where you realize as well the anti-abortion views of right-wing lawmakers and some people on the Supreme Court -- they don’t mirror what actual Americans want, right? And that’s a huge problem in this country. It’s like letting the craziest dude in your friend group plan your bachelor party. And you’re going to be like ‘I just wanted to play beer pong -- how did we end up in a Bangkok prison? Not cool, Samuel.’”  - Trevor Noah

“They also changed their state bird from the western meadowlark to flipping off Sam Alito.” - Stephen Colbert

August 27, 2021 On Tuesday, the US House of Representatives passed H.R.4, the John Lewis Voting Rights Advancement Act, named after the late civil rights icon and Georgia Congressman. The bill...