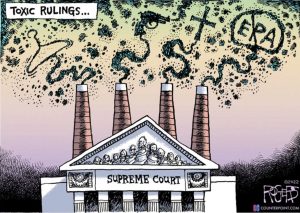 On the Supreme Court’s year
Stephen Colbert referred to the court’s year of bold calls as “a real roller-coaster ride, in that I am nauseous and scared we’re all going to die.”

It “was the final day of the Supreme Court’s current term and I gotta say, thank god. This must be how the Jets feel when halftime finally arrives: [imitating a Jets player] ‘Well, at least we get 15 minutes when they can’t kick our [expletive]!’” - Seth Meyers

“With these maniacs in charge, our only hope is that the smokestacks put on a condom.” - Stephen Colbert

On the EPA ruling
“The Supreme Court ruled that the Environmental Protection Agency does not have the authority to protect the environment? So what is their job now?” - Trevor Noah 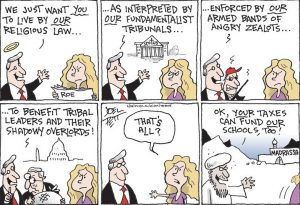 “What are you thinking, Supreme Court? It’s the Environmental Protection Agency -- if they can’t limit the emissions, then the agency can’t protect the environment. They’re going to have to change what the ‘P’ stands for -- maybe ‘Environmental Punch-Dolphins-in-the-Taint Agency.’” - Stephen Colbert

On Roe v. Wade ruling
Chelsea Handler kicked off four nights as guest host of “Jimmy Kimmel Live” saying, “I will be here all week long, or at least until Republicans make it illegal for women to talk.”

“Jimmy is off right now doing whatever the [expletive] he wants with his body.”

“Remember like five days ago when Fox News told us the biggest threat facing America was drag queens? That was cute.” 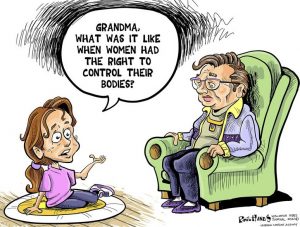 “At this point, I’d probably have more rights if my vagina was an AR-15.”

“Not only has this decision further divided our country, most families now have two separate group texts going: one with relatives who support the rights of women and one with the relatives who live in Florida.” - Chelsea Handler

“Following the Supreme Court’s decision to overturn Roe v. Wade, urologists have reportedly seen an uptick in requests for vasectomies. And this is weird -- from women: [imitating woman] ‘His name is Dave -- I’ll bring him in.’” - Seth Meyers

“I’ve never personally performed a vasectomy, but I’d like to try my very first one on Samuel Alito.” - Chelsea Handler

“Everyone is talking about the Supreme Court after they made some pretty major decisions over the last few days, and let me just sum it up for you: They basically said whether it’s a gun or a baby, you’re carrying something.” - Jimmy Fallon 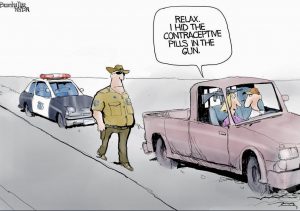 On Gun Ruling
“Basically, New York had a law for the past 100 years that said if you want to just carry a gun around with you wherever you go, you need to prove that you have a specific reason you need that gun for your protection. Maybe someone is making threats against you, or maybe you’re Liam Neeson’s daughter and people keep trying to kidnap you, even though it seems like it would be way easier to kidnap someone else’s daughter at this point.” - Trevor Noah

“Yeah, I don’t know about you guys, whenever I’ve been sitting in rush-hour traffic in New York with drivers screaming at each other and bikers cussing out the drivers and pedestrians wailing at the bikers and the drivers, the one thing I always think is, ‘Man, one thing that would calm this down is if everyone had a gun right now. Just a Glock or two would really chill the situation out.’” - Trevor Noah 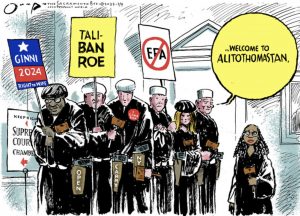 “You can see where this is going. This Supreme Court is feeling themselves, huh? Because you realize they finally have all the justices they need to do anything they want. It’s like Amy Coney Barrett was the last infinity stone that they needed. Yeah, they put it in, and now they’re just snapping away at all the laws. It’s like voting rights, gun control, Miranda rights, abortion. I love this song, yeah!” - Trevor Noah

“Ketanji Brown Jackson was sworn in as the Supreme Court’s 116th justice -- and then Clarence Thomas dissented against that, too.” - Seth Meyers

On January 6 Hearings
or as Stephen Colbert referred to the first night, “Episode One of this summer’s most compelling drama.” 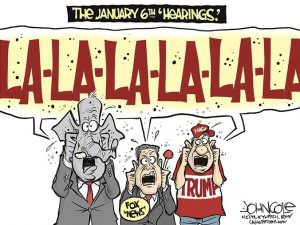 “It aired in prime time across all major networks. Yep. The footage is rough to get through. Right after the hearing, I watched an episode of ‘Dateline’ just to lighten the mood.” - Jimmy Fallon

“It’s like ‘Stranger Things’ -- we met the monster years ago, and we’re pretty sure the Russians are involved.” - Stephen Colbert

“Of course Fox didn’t airing it -- they’re a key suspect in it. They would be -- that would be like if Court TV’s coverage of the O.J. trial had been hosted by O.J.” - Seth Meyers

And on Cassidy Hutchinson’s testimony on Trump food tantrums and his attack on a Secret Service agent in the presidential limousine when he wouldn’t let Trump join the rioters at the Capitol.

“Evidently, the former president breaks a lot of dishes, which is why his handlers make sure his meals are served only in bucket or edible bowl.” - Stephen Colbert 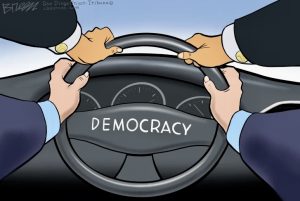 “He went for the throat! When you get into the Secret Service, you know you have to take one for the president, but you never expect to take one from the president: ‘Thank you for your service. Let’s keep this part secret.’” – Stephen Colbert

“Immediately the agents were like, ‘Who the hell let him out of his car seat?’” - Jimmy Fallon

“Not to victim blame, but this is on the Secret Service, all right? You had four years to Trump-proof that vehicle -- you knew who you were dealing with. There should have been a toy steering wheel in the passenger seat the whole time. Just let him think he’s driving and go back to the West Wing anyway.” - Trevor Noah