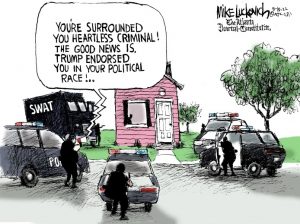 “Ah, yes, the excitement of midterm state primaries. Put the coffee on, honey, it’s gonna be an all-nighter.” – James Corden

“The results are in, and America has upheld its proud tradition of not knowing who won.” – Stephen Colbert

“One of the most-watched races is in Pennsylvania, where Dr. Oz is trying to win the Republican nomination for Senate. My apologies to Dr. Oz, but I can’t cross party lines -- I’m a Dr. Phil guy through and through.” - James Corden 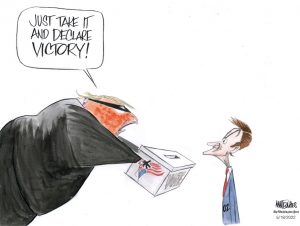 “Yeah, as of right now, Dr. Oz is in first place, David McCormick is in second, and the ‘Cash me outside’ girl is in third.” – Jimmy Fallon

“McCormick’s chief strategist tweeted, ‘Based on how many uncounted absentee ballots there are and the margin by which Dave has won them so far…we are confident of victory,’ while an adviser for Dr. Oz pointed to uncounted ballots in Philadelphia and declared, ‘It’s a jump ball,’ which, I will remind you, is how they eventually decided Bush v. Gore.” – Stephen Colbert

“And while Dr. Oz is in the lead for the Republican nomination, more votes have to be counted because the race is still too close to call. This is kind of great. I mean, for once it’s nice to have a doctor waiting for us.” - Jimmy Fallon 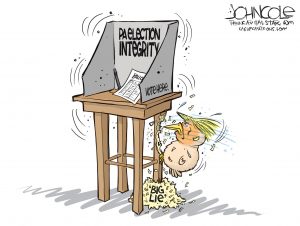 On Dr. Oz touting his endorsement from Donald Trump: “Because there’s nothing more impressive than being called smart by a man who stared directly at an eclipse.” – Stephen Colbert

“Oh, Madison, you may be gone, but soon you’ll be forgotten. At least now he’ll have more time for his other job, starring as the, I don’t know, bad-boy villain in a CW drama? He looks like he should be next to a locker threatening to tell Pacey about Dawson’s relationship with Joey.” – Seth Meyers

On George W. Bush Slip Up
While giving a speech about Russia’s war in Ukraine, he misspoke, referring to it as “a wholly unjustified and brutal invasion of Iraq.” 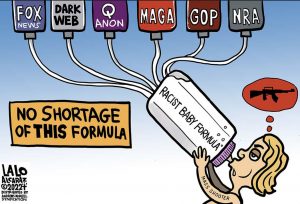 “I hate when I mix up my unprovoked invasions.” – James Corden

“Oof. That’s like your wife asking if you’re hungry and saying, ‘I could cheat. I mean eat. I could eat with my mistress.’” – Seth Meyers

“Dubya and I, for about 10 years, had so many good times together back at the old ‘Colbert Report.’ I made so much fun of him, and he gave he so many reasons to do that.” – Stephen Colbert 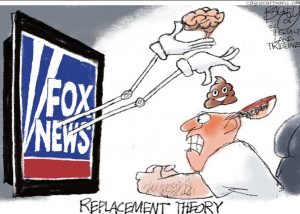 “The so-called replacement theory is obviously racist, dangerous and dehumanizing. But on top of everything else, it’s also incredibly stupid. I mean, just think about it for, like, half a second -- no one’s being replaced. There’s no capacity limit here. It’s not like there’s a bouncer who only lets two in when two leave.” - Seth Meyers

“Now, that doesn’t mean Tucker’s responsible, but I would hope it would give anyone pause to find out that their browser history matches that of a mass murderer. If I found out that Jeffrey Dahmer was really into ‘The Lord of the Rings,’ I might switch over to the ‘Narnia’ stuff.” – Stephen Colbert 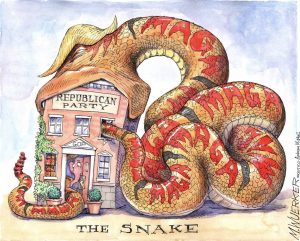 Biden's World
“While speaking to thousands of union electrical workers, President Biden referred to former President Trump as, quote, ‘the great MAGA king.’ OK, can we please not give him any more ideas?’” – Seth Meyers

“Congratulations, Joe! You’ve selected the one nickname that Trump will gladly use. I mean, I guarantee Trump already has that monogrammed on towels.” - James Corden

“President Biden criticized Republicans at a fundraiser for their recent attacks on Disney and said, quote, ‘They’re going to storm Cinderella’s castle before this is over.’ Oh, buddy, I hate to tell ya — if they’re storming anything, it’s the Hall of Presidents.” – Seth Meyers

“President Biden told a small gathering at a Democratic fundraiser that it’s going to be ‘hard’ to maintain the majority in both houses of Congress, especially since they don’t have it in the first place.” – Seth Meyers

“President Biden called Ferdinand Marcos Jr. to congratulate him on winning the Philippine presidential election. Said Biden, ‘Remember, winning is the easy part -- the hard part is convincing everybody that you actually won.’” – Seth Meyers

Of President Biden's recent visit to a farm in Illinois, Jimmy Fallon said, “But this is strange: At one point Biden actually walked into a cornfield and slowly disappeared: ‘If you build back better, votes will come.’” 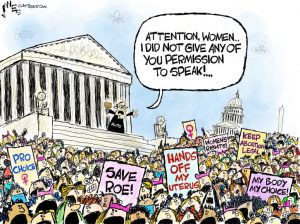 On the Abortion debate and Supreme Court leak of a draft ruling overturning Roe v. Wade
“Do all these pundits whining about the leak really think this is what will shatter the integrity of the court? Not the fact that Republicans stole a seat from President Obama or the fact that several of their nominees apparently lied to the Senate about their positions on Roe, or the fact that one of them called opposition to his nomination based on credible sexual assault allegations a smear campaign orchestrated by shadowy left-wing groups and the Clintons? I could go on, so I will.” - Seth Meyers

“How will they ever recover from this breach of their personal privacy? Maybe Samuel Alito can start wearing a shirt that says, ‘My judicial body, my choice.’” - Seth Meyers 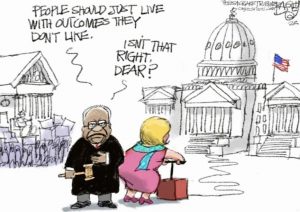 “And how do you know it’s a liberal? It could have just as easily been a conservative -- [coughs] Ginni Thomas [coughs] -- who leaked the opinion to freeze the majority in place and stop the chief justice, John Roberts, from trying to convince one of the other court’s conservatives to soften their stance. I have no idea, but the fact that they’re all freaking out about the leak instead of celebrating the victory is telling. It underscores yet again that even at the height of their powers, these people always have to play the victim. If they won a free car on ‘Wheel of Fortune,’ they’d immediately start whining: ‘But I already have two cars in my garage -- I don’t have space for a brand-new Stingray. This is so unfair!’” - Seth Meyers

“Yes, a left-wing Antifa law clerk trying to sabotage the court, or a right-wing MAGA head trying to lock the decision in place. Or maybe it was the butler. It’s always the butler.” – Trevor Noah 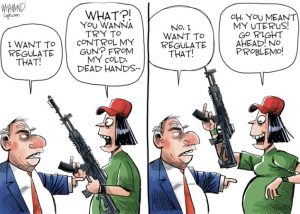 Then the Senate voted against legislation that would have guaranteed abortion rights nationwide…“Even though a strong majority of American voters want those rights protected, every Democrat voted in favor of the bill except Joe Manchin, who voted with his fellow Republicans.” - Jimmy Kimmel

“With the Supreme Court likely to overturn Roe v. Wade, the Democrats wanted to get their counterparts on the record opposing it. Chuck Schumer said he called for the vote so we would know where Republicans stand. Turns out, they’re standing in the year 1865.” - Jimmy Kimmel

“It almost feels like maybe we shouldn’t have let the host of ‘Celebrity Apprentice’ pick three Supreme Court justices, you know?” - Jimmy Kimmel