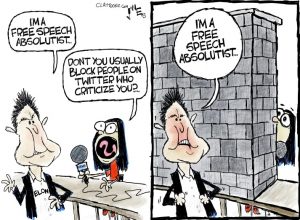 On Elon Musk’s offer to buy Twitter for $43 billion
The larger offer came after Musk first bought $2.89 billion worth of shares in the company, becoming Twitter’s largest shareholder. “OK, did no one tell him you can read all the tweets for free?” - Stephen Colbert

“No, he offered to pay 54.20 per share. Yeah, not 54 dollars exactly — no, 54.20. And that’s how you know that you’re too rich — when you’re spending an extra few million dollars just to slip a weed joke into your takeover bid. We already knew he was high when he said he would unlock Twitter’s full potential.” - Trevor Noah

“Oh my god. He could do so much with that money: address world hunger, fix climate change, get a decent haircut.” - Stephen Colbert 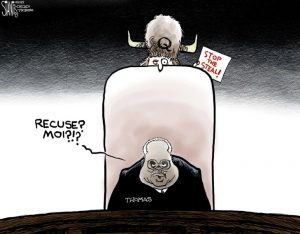 On Rudy Giuliani's recent agreement to finally cooperate in unlocking 18 electronic devices originally seized by federal prosecutors during their investigation into his lobbying Ukraine last year.

“Always a good sign when you have three phones.” said Jimmy Kimmel. “He gave them a list of possible passwords to two other devices they seized, and even let investigators look inside the coffin he sleeps in during daylight hours.” 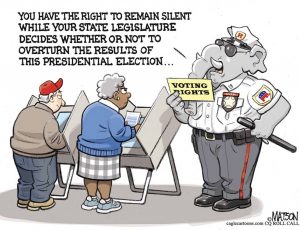 On Trump former legal advisor John Eastman's ongoing push to decertify the 2020 election -
“That’s right, the election that’s been over for a year and a half, and that Biden won. To put that into perspective, when the election was decided, J. Lo was engaged to a different guy,” - Stephen Colbert

Eastman recently urged Republican Wisconsin Assembly Speaker Robin Vos to nullify the 2020 election by ‘reclaiming the electors’ or holding a ‘do-over ‘election. A ‘do-over’? Our ex-president isn’t allowed a do-over just because he didn’t like the result the first time. That’s how you get an Eric.” - Stephen Colbert

Colbert added, "Eastman’s trying to re-litigate the 2020 election, which legal experts say is impossible. Only if you don’t believe in yourself -- that’s why I’ll never throw away my Mondale ’84 signs.” 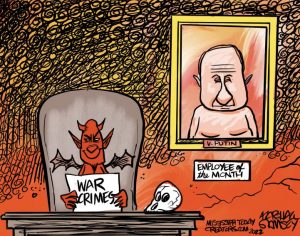 On Ukraine
"Ukrainian president Volodymyr Zelensky appeared at the Grammys in a pre-taped address, urging viewers to support Ukraine, saying 'Fill the silence with your music! Fill it today. To tell our story.' Adding, ‘But not you, Kanye, we’re dealing with enough already.’” - Stephen Colbert

Colbert said Ukrainians have launched an investigation into the “genocide” of its people and possible Russian war crimes. “I’m going to save everybody some time and pull the ‘possible’ out of that sentence,” said Colbert. “It’s for sure war crimes. Investigation done. It’s settled.” 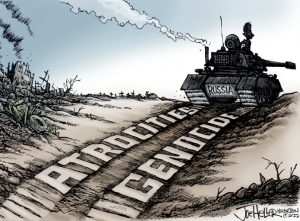 “It’s generally frowned upon for US presidents, current or former, to solicit our murderous, mortal enemies for dirt on their political rivals… Does this man have no shame?... And, I withdraw the question.” - Stephen Colbert

“As usual, his timing is impeccable. He reminded the world that Putin is his buddy at the exact moment that everyone realizes that his buddy is actually Hitler. This is worse than last year, when Jell-O re-signed Bill Cosby to announce their new flavor, ‘Out on a Technicality Orange.’” - Stephen Colbert

Even right-wing Fox host Sean Hannity’s tried to get the former president on record against Putin, but he refused, instead bragging about their friendship. “There are body bags on screen, [and] he’s bragging about the dudes he knows,” said Jimmy Kimmel. 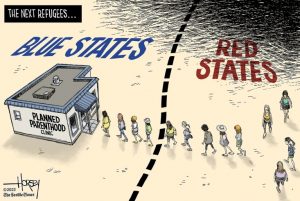 On Trump saying the would be handling the current crisis better than Biden. Kimmel said if Trump was in charge now, “he’d be throwing rolls of paper towels at Ukrainian refugees.”

On Trump’s random reference to the dangers of windmills and how they are currently killing eagles, Kimmel said, “What is the deal with him and windmills? Did he have a traumatic mini gold experience as a child? Maybe that’s why his hair is like that? I feel like the hamster that powers his brain is getting tired right now.”

“Wow, how strict is your definition of modern history?” wondered Seth Meyers, breaking out his Pence impression: “Modern history is everything since The Slap. Then from 900 AD to The Slap, that’s the middle ages.”

“Seriously, man, what’s your deal?” he continued. “You’re still trying to win over Trump voters? They stormed the Capitol and they chanted ‘hang Mike Pence.’ That’s you! You’re like a guy who gets a fake number from a woman at a bar and keeps calling it hoping to get a date.”

On Marjorie Taylor Greene’s war against Jimmy Kimmel, who struck a nerve with the Georgia Congresswoman, prompting her to tweet that she had filed a threat report with the Capitol Police. 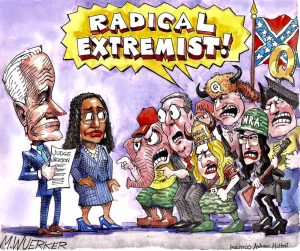 Kimmel explained that after hearing “M.T.G., ‘Klan Mom’ as we call her” malign three of her fellow Republicans ‘pro-pedophile’ for supporting Judge Ketanji Brown Jackson’s nomination to the Supreme Court, he joked, ‘Where is Will Smith when you need him?’ And then she saw it, and she decided she was going to get some political mileage out of this.”

“She called the police. Not only did she call the police, she called the same police she voted against giving a congressional gold medal to for defending our Capitol against the insurrection she helped incite on January 6. That’s who she called -- the people she wanted to defund.”

Kimmel went on, “So I, after processing the fact that someone called the police on me — believe it or not, that has never happened to me in my life -- I tweeted back, ‘Officer? I’d like to report a joke.’” 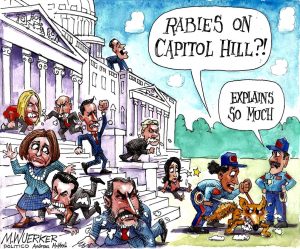 “This woman, remember, she is the one who endorsed fringe conspiracy theories and repeatedly indicated support for executing prominent Democratic politicians. Now she’s dialing 911 because she got made fun of. She’s a snowflake and a sociopath at the same time -- a ‘snowciopath.’ I feel like maybe other Republicans like having her around to make the rest of them seem normal.”

On GOP Congressman Cawthorn’s sex and drugs allegations
“Speaking of right-wing weirdos, there’s some splashback to the story from North Carolina Congressman and haunted jack-in-the-box, Madison Cawthorn, who made some extraordinary claims that his Republican colleagues in Congress are orgy-frequenting degenerates with a fondness for hard drugs. Given the average age of the GOP, I assume they’re snorting Boniva.”  - Stephen Colbert 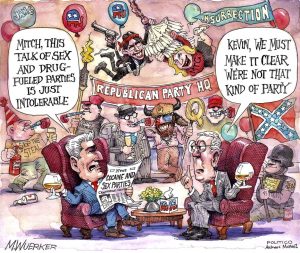 “House GOP leader Kevin McCarthy called Cawthorn into his office, maybe hoping to score an invite or to tell him to stop narcing.”  - Seth Meyers

“Cawthorn is now taking back the comments …He sounds like me in high school trying to convince my mom and dad that everyone at the party was drinking except me: ‘No, I just had — I just had a Sprite because I didn’t like the taste of liquor.’” - James Corden 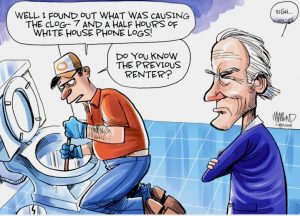 Meyers said the party is consumed by its own conspiracy theories, and focusing more on Cawthorn’s lurid stories than the fact that they are missing seven hours of Trump’s call logs during an insurrection.

Trump has denied using burner phones during the January 6 riot to maintain privacy, claiming not to know what a burner phone is. “Dude, you worked in New York real estate for decades. I bet every phone he used was a burner phone,” said Meyers, adding Trump has always gone overboard with his defense. “It’s like if your parents say they found weed in your sock drawer and you say, ‘What the hell is a sock?’” 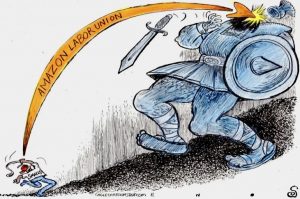 On former President Barack Obama's first return to the White House in five years
“Obama was there celebrating the 12-year anniversary of the Affordable Care Act, Obamacare, and also to help Joe set up his Roku.” - Jimmy Kimmel 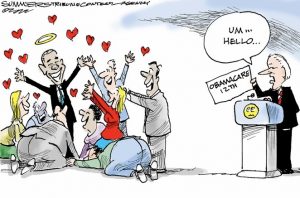 “It was great to see him. It was like the ‘White Men Can’t Jump’ reunion at the Oscars.” - Jimmy Kimmel

“He was there to promote Obamacare and to get that pack of smokes he forgot in the Lincoln bedroom ... Then, hopefully, they locked the doors to keep him in.” - Stephen Colbert

“But it was fun to see the former president at the White House. Obama felt like a guy who was visiting his old high school, and Biden was like the old gym teacher who never left.” - Jimmy Fallon

“That’s really got to bother Trump. All these lies and schemes and lawsuits to get back to the White House, Obama just strolls right in there.” - Jimmy Kimmel

February 14, 2018 On Monday the Trump Administration released its long-awaited infrastructure plan, which on the surface calls for a $200 billion federal investment over the next decade. One need...