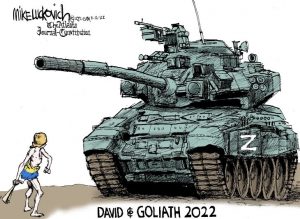 “Based on his references to American history, it was clear that Zelensky knew his audience. Yeah, that’s right, Zelensky brought out all of America’s major moments: ‘I have a dream,’ 9/11, Mount Rushmore. You know he was on Wikipedia last night planning this out: [imitating Zelensky] ‘OK, Pearl Harbor, Boston Tea Party - should I mention Hulk Hogan sex tape, maybe?” - Trevor Noah

“Zelensky asked America to establish a no-fly zone over Ukraine, which we’re reluctant to do because it could result in nuclear war. But we are willing to wear blue and yellow lapel pins at all the awards shows this month, so that’s something, right?” - Jimmy Kimmel 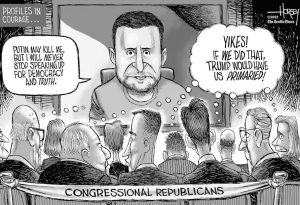 “I can say with absolute certainty, that’s the warmest reception anyone has ever received on Zoom.” - Seth Meyers

“You know it is powerful when that many old people jump to their feet. There are knees in that room that were alive during the Roosevelt administration.”  - Stephen Colbert

“It was bipartisan. Republicans and Democrats stood for him, which is almost impossible. It’s like getting Kim and Kanye to agree on a daycare situation - it’s very difficult.” - Jimmy Kimmel 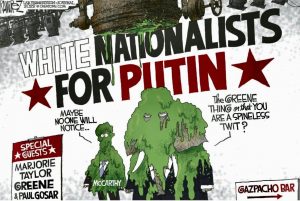 Zelensky “took his bravery to a whole new level of bad-assery” with a video filmed in Kyiv, where he has remained despite reports of assassination attempts. “That is so brave. I am personally inspired,” said Stephen Colbert. “And I just want to say: Vladimir Putin, I’m not afraid of you, either! If you’re looking for this comedian, I’m at the Ed Sullivan Theatre on Broadway … five hours ago. We pre-taped this show.”

On attempts at Russia-Ukraine peace talks
“But please do not get your hopes up. Not only did Russia not agree to end the war; it wouldn’t even admit that it started a war.” - Trevor Noah

“I can’t even imagine how strange these meetings must be. It’d be like trying to have a conversation with someone who’s actively setting your house on fire.” - James Corden 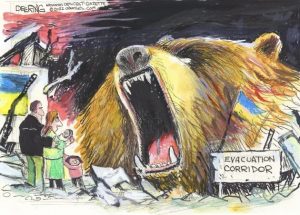 “Do they get there and there’s small talk before they get into it: ‘Ah, yeah, that Russell Wilson trade is crazy. Anyway, we would love it if we could, you know, pump the brakes on the whole invasion thing.’”  James Corden

“It’s like a nesting doll of bad,” said Stephen Colbert, as Russia continued to break its own announced ceasefires. Putin has since said he would reopen corridors, but only for civilians to flee to Russia. “Well, that’s not helpful. That’s like having a safety sign that says ‘in case of fire, jump into a pit of snakes.’”

“It’s like Putin’s competing in the evil Olympics against himself, and because he’s Russian, you know he’s juicing.” - Stephen Colbert 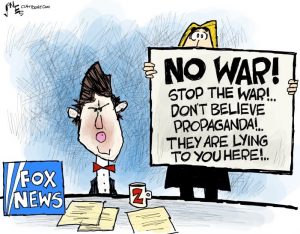 On major company boycotts of Russia
“One Kremlin spokesperson expressed it in this threatening way: ‘The United States has declared economic war on Russia.’ Thank you for noticing. We feel seen.” – Stephen Colbert

“And with the Golden Arches closing down, Russians are going to have to settle for their local chain, McDostoevsky’s, home of their kids’ meal: the box of sadness.” – Stephen Colbert

“As we told you yesterday, McDonald’s, Starbucks and now Coca-Cola have announced that they are suspending business in Russia. Yes, which means the Russian people are going to be forced to develop diabetes on their own now.” - Trevor Noah 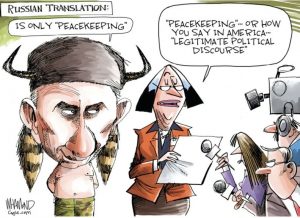 “One of the major companies is Starbucks. They just closed all 130 of their stores over there - and that was just on one street.” - Jimmy Fallon

“There’s always Dunkin’ Donuts, but Putin was like: ‘Nyet. That’s what America runs on.’”  - Jimmy Fallon

“And then, facing growing public pressure, Papa John’s announced that it is halting all Russian business operations. Russians were like, ‘Finally, some good news.' Not to be outdone, Arby’s announced that they are punishing Russia by staying open.” - Jimmy Fallon 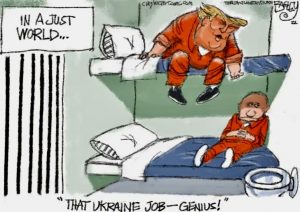 On Donald Trump's suggestion that the US should paint Chinese flags on F-22 jets and bomb Russia
“Finally, a way to bring stability to the world - a war between Russia and China.” - Seth Meyers

“So, if you’re wondering what Trump has been up to lately, the answer is huffing glue.” - Jimmy Fallon

“It’s worth remembering that we came incredibly close to having this criminal dingus in charge of our response,” said Seth Meyers. "Can you imagine - have you heard him talk lately? He sounds like he’s muttering to himself while sitting under his favorite tree at the old folks home after getting his morphine drip topped off.”

“These are the types of ideas you come up with after you stare at the sun too long.”- Jimmy Fallon 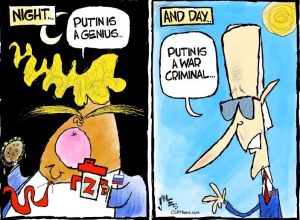 “He definitely gets his ideas from cartoons. I mean, this is a slightly stupider version of Bugs Bunny dressing up as a sexy lady to distract Elmer Fudd.” - Seth Meyers

“Then Trump said that he would stop Russian tanks by painting a tunnel on the side of a mountain so they slam into it. [Imitating Trump] ‘Meep meep.’” - Jimmy Fallon

On making daylight savings time permanent
“The United States Senate today voted across party lines to make daylight saving time permanent, meaning we may never have to change the clock on the microwave again!” said Jimmy Kimmel. “Various politicians have been trying to do this for years but they kept getting clock blocked.”

“When was the last time anything got a unanimous vote in the Senate? They couldn’t even agree unanimously to condemn Asian American hate crimes. Josh Hawley was like, ‘Let’s not rush into anything.'” - Jimmy Kimmel 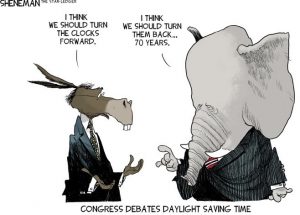 Kimmel said he was “especially proud to be an American today. We finally agreed on something. An idea that every sane American can get behind: that the sun shall never again set at lunchtime on Christmas Day, and may God bless us, everyone.”

“They’re calling it the Sunshine Protection Act, which is actually my favorite Maroon 5 album.” - James Corden

On NFL quarterback Tom Brady's un-retirement
“So, yeah, it was big news when Tom Brady retired. But you know what’s even bigger news than retiring? Un-retiring,” said Trevor Noah.

He added, “I love this guy. He is the main character. What’s the NFL without Tom Brady, huh? Him leaving the NFL is like when Charlie Sheen left ‘Two and a Half Men.’ Yeah, there were still two and a half men, but which men? Not men we cared about.” 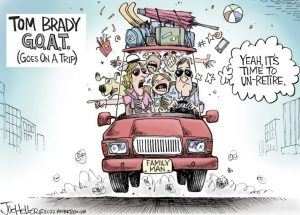 “Tom Brady is like your friend who announces she’s quitting Instagram and then posts something three hours later.” - Jimmy Kimmel

“Brady’s retirement lasted 40 days. In other words, he pretty much gave up football for Lent.” - Jimmy Fallon 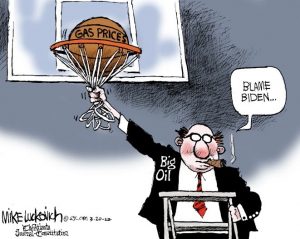 “Of course, my dear friend Tom Brady’s not just returning for the love of the game. He’s also set to make $25 million next season, which is what you’d have to pay me to go to Tampa.” – Stephen Colbert

On Biden's announcement of a ban on imported Russian oil, gas and coal
“Take that, Putin! We’re not going to buy our gas from a war criminal. We’re going to buy it from the good guys: Saudi Arabia.” - Stephen Colbert

“Yeah, this is devastating for Russia. Now their biggest export is bad guys in ‘John Wick’ movies.” - Jimmy Fallon

“Like, if this keeps up, the next ‘Fast and Furious' movie will take place on public transportation.” - Trevor Noah

“Gas prices are so high, Americans are just filling their cars with Red Bull and hoping for the best.” - Jimmy Fallon

“But on the bright side, this is the perfect excuse to pretend you’re going to get back on the bike you bought mid-pandemic and rode twice.” - James Corden