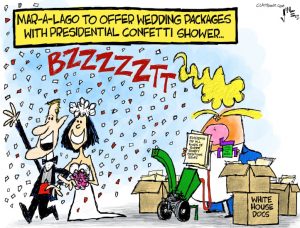 On reports that former President Donald Trump shredded official documents
“So you know how Trump had to hand over all his records related to January 6? Well, when the documents, when they finally handed them over - they were forced to - many of them had been torn into pieces and had to be taped back together. They’d been personally ripped up by Trump. The National Archive didn’t explain how they know they were ripped up by Trump. My guess is tiny little barbecue sauce fingerprints.” - Jimmy Kimmel

“Now, it violates the Presidential Records Act to tear up official documents, but the former president had a very good reason: He was afraid of going to jail.” - Stephen Colbert

“Trump had such a habit of ripping up important documents, they had to hire people whose job was to tape them back together. I love that Robert Mueller couldn’t get him, but Trump might finally get brought down by a roll of Scotch tape.” - Jimmy Kimmel 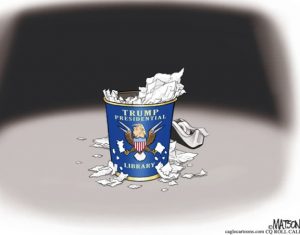 Trump said that allegations that he flushed documents down his toilet were not accurate. “This is a conversation you have with your three-year-old … not the former president,” Jimmy Kimmel joked. “It’s toilet watergate is what it is.”

Reporter Maggie Haberman also revealed that Trump had maintained a friendship with the North Korean leader Kim Jong-un since his presidency. “He held Kim Jong-un’s hand longer than Melania’s,” said Jimmy Kimmel. He then joked: “Weird to think that the relationship between Kim and Trump could last longer than Kim and Kanye.”

“At this point I’m wondering if there are any laws that Trump hasn’t broken? If there was a Guinness Book of World Records for crime, he’d probably steal the book,” said Trevor Noah. “In every scandal involving Trump and documents, none of them involve him reading them.” 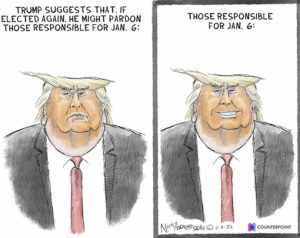 On Trump's recent announcement at a Texas rally that, if re-elected as president, he would consider pardoning those involved with the Capitol riot
Trevor Noah called Trump “the greatest con man of all time,” noting he had not pardoned those involved while he was still in office and instead let them be prosecuted. “Trump is basically the ex that America kicked out for throwing an open house party at the Capitol. And like many exes, he really wants a second chance. But instead of promising to do better next time, he’s threatening to do even worse.”

“What a weird platform to run on for president: ‘I will pardon violent criminals.’” - Stephen Colbert

“While the January 6 select committee continues to look for the cause of the Capitol riot, the cause admitted to everything and threatened to do it again.” - Stephen Colbert

“There’s no better way to announce a presidential run than to say, ‘I’ll empty the jails!’” – Jimmy Fallon 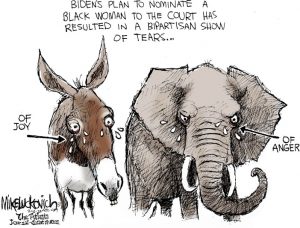 On Supreme Court Justice Stephen Breyer’s retirement and Biden’s nomination strategy
“After White House press secretary Jen Psaki said that President Biden will stand by his commitment to appoint a Black woman to the Supreme Court, a Fox News panel criticized the administration’s selection process. I’ll take a wild guess and say they have exactly two problems with a Black woman.” – Seth Meyers

“I also hear what the Fox people are saying It shouldn’t matter whether you’re Black or white, this position should only go to the most qualified judge who also thinks that guns are people.” – Trevor Noah

“No, she’s going to be qualified,” Noah added. “And why is that a bad thing? Why not try to make the supreme court a little more representative of the country it represents?... it would be nice to have at least one justice on there who’s had to ask the Walgreens guy to unlock the shampoo shelf.” 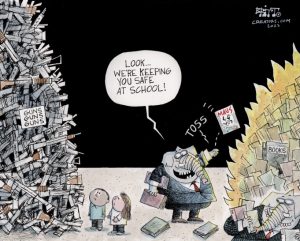 “Now Republicans are saying even when it’s not an election year, they won’t confirm a Democratic nominee. Next, McConnell’s going to claim the constitution says ‘the Senate can’t confirm a nominee when a Democrat is president in a month ending in Y when it’s alternate side parking before or after Labor Day in a year when Tom Brady isn’t in the Super Bowl.’” – Trevor Noah

On Voting Rights legislation failing and the refusal of Democratic Senators Manchin and Sinema to end the filibuster in order to pass it
“When it comes to voting, there’s only one side. Republicans are the ones waging war on democracy. You can’t compromise with the side that’s doing the damage. When you’re putting out a fire, you don’t call the fire department and the arsonist and see what they can work out together.” - Seth Meyers

“What Joe Manchin is saying is: I want to help you out of the water. I’m not going to throw you a rope, but I want to throw you the rope. And any drowning man would agree, it’s the thought that counts.” – Trevor Noah 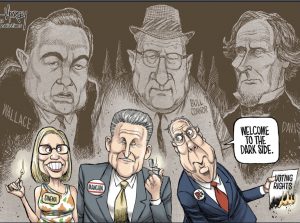 “After the vote, the Senate minority leader, Mitch McConnell, ‘poked his little old head out of his shell to accidentally say what he really means’ about his reasons for blocking the measure. Asked by a reporter how he would respond to people of color worried about their right to vote, McConnell answered, ‘The concern is misplaced because if you look at the statistics, African American voters are voting in just as high a percentage as Americans.’ He means ‘regular’ Americans – the pink ones, like him.’ - Jimmy Kimmel

On Rudy Giuliani recently taping an episode of the new season of Fox’s reality show “The Masked Singer”
“How does this even happen? I mean, a lot of people at Fox had to sign off on this. Not one of them was like, ‘Hey, maybe we shouldn’t have the guy who is under investigation for helping to plot an insurrection singing on our show’?” – Jimmy Kimmel 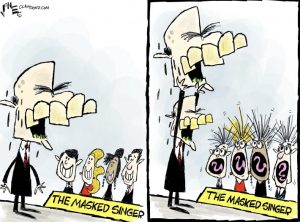 “Now, if you’re not familiar with ‘The Masked Singer,’ congratulations.” – Stephen Colbert

“Fox isn’t revealing what his swan song was, or which animal costume Rudy wore, though it was safe to assume he was a jackass.” – Stephen Colbert

“One of the most chilling phrases in the English language is ‘Surprise! It’s Rudy Giuliani!’” – Stephen Colbert

On New York State’s AG accusing Trump’s family business of misrepresenting the value of its assets
“According to documents filed by Attorney General (Letitia James), they’ve uncovered evidence that indicates the Trump Organization repeatedly engaged in ‘fraudulent or misleading' practices. The walls appear to be closing in on Trump - big, beautiful walls.” - Jimmy Kimmel 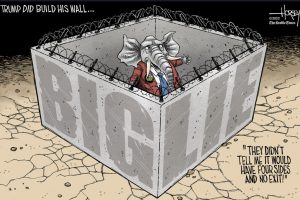 “One year ago today, Donald Trump was still in the White House, throwing chicken nuggets at the TV, and one year from today, he could be in jail.” - Jimmy Kimmel

“James says that her office has uncovered significant evidence that the former president fraudulently valued multiple assets, including his own private residence...that’s no surprise - he’s known for falsely tripling the size of his assets.” – Stephen Colbert

“But this is nice, they’re interviewing Donald Jr., Ivanka, and have already talked to Eric, making this the first time Tiffany was happy to be excluded.” – James Corden

“But it’s a fairly straightforward case. To find fraud in a business, you just have to look for the signs - particularly the signs at the top of the building that say ‘Trump’ on them - and you will find it there. There is where you will find his male pattern fraudness.” - Jimmy Kimmel

On the Republican Party's internal squabbles
The Republican National Committee voted to censure GOP legislators Adam Kinzinger and Liz Cheney for participating in the House inquiry into the insurrection, and in a statement called the attack “ordinary citizens engaged in legitimate political discourse.”

In a rebuke of his own party, Senate Minority Leader Mitch McConnell reaffirmed that the attack was 'a violent insurrection' aimed at preventing the peaceful transfer of power. “Just to show you how far down the crazy hole we’ve gone, we’re now applauding Republicans who are willing to admit that what happened, happened.”

“If you’ve got cold soup you’d better watch it because Nancy Pelosi is coming for it. These must be the soup Nazis Seinfeld warned us about so many years ago. And if the gazpacho police get ahold of you they’ll throw you right in the goulash.” - Jimmy Kimmel

On Mike Pence's recent rebuke of Donald Trump, saying at a conservative conference that Trump's claim that Pence could have overturned the election “is wrong.” “Strong words - ‘President Trump was wrong,’” said Jimmy Kimmel. “You know he spent all day practicing that in front of a mirror as mother patted him gently on the britches.

Well if that isn’t Stella getting her groove back, I don’t know what is. The vice-poodle has been unleashed. What a weird turn of events. I thought for sure Melania would dump Trump before Mike Pence did.” 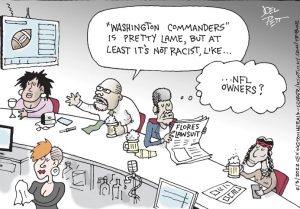 On the new name of the former Washington Redskins, now “The Commanders”
“And just like that, she made racism disappear!” Jimmy Kimmel joked of the team’s co-owner Tanya Snyder, who handled the unveiling of the new uniforms. “The ‘W’ stands for ‘Why did it take you two years to come up with this?’”

“‘The Commanders’ kind of sounds like an action movie where Dolph Lungren and Sylvester Stallone join forces to defend their assisted living facility.”

Kimmel went on, “Interestingly, the franchise now shares a name with President Biden’s dog, who is also named Commander. Good thing they didn’t name it after Trump’s dog. ‘The Washington Pences’ - it doesn’t have the same ring to it.”

“To give you an idea of how fans reacted, shortly after the announcement, this is true, the word ‘terrible’ trended on Twitter, which is surprising, considering how Twitter is normally so welcoming and so positive.” - James Corden