To Remind Us to Laugh (while celebrating)! 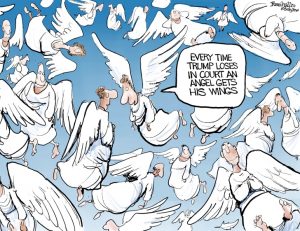 On the US Supreme Court's rejection Wednesday, issued in one sentence, of Republican's challenge to the Pennsylvania presidential vote

"That is amazing. They rejected Trump's whole argument in one sentence. That's pretty much the Supreme Court's version of responding to a long text with 'K.'" - Jimmy Fallon

"This president hasn't faced this much rejection since every time he has tried to hold Melania's hand." - Stephen Colbert

"All of the justices were like, 'We put on our robes for this?'...The court really tried to do Trump a favor, though. They figured if it was one sentence, he would actually read it." - Jimmy Fallon

"One sentence. That page had less ink than Rudy Giuliani's face." - Jimmy Fallon 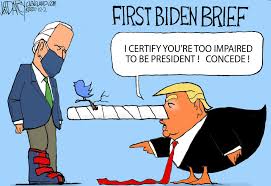 "Well, that's going to be a nice change of pace for the briefers to give a list of national security threats to a president who's not on it." - Stephen Colbert

"Thanks to Trump's daily brief, Biden will now be well versed in foreign and domestic threats and who got eliminated on 'The Bachelorette.'" - Jimmy Fallon 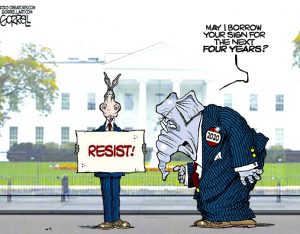 On Rudy Giuliani's bizarre November 19th press conference, where he insisted that the election had been fraudulent, while he appeared to drip sweat and hair dye.

"Remind me, is it a good sign when your lawyer starts melting?" - Stephen Colbert

"Wow, nothing screams 'confident lawyer' like a guy standing in front of everyone dripping in sweat." -  Jimmy Fallon

"You know your legal strategy is [expletive] up when even your hair starts crying about it."

"I mean, Trump always said that he had leakers in his administration, but I didn't know it was this bad." - Trevor Noah

"He was literally dyeing up there today." - Jimmy Kimmel

"That's not just hair dye; it looks like his hair is dying...Rudy dyed his hair, but his head is challenging the results." - Stephen Colbert 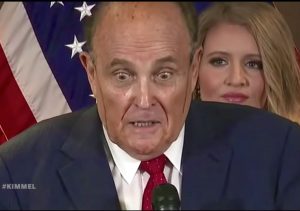 "This actually reminds me: I'm in charge of making gravy this Thanksgiving." - James Corden

"Sadly, this Covid test is the only positive thing to come out of Rudy Giuliani in four years." - Jimmy Kimmel

"Rudy Giuliani testing positive for Covid-19 is a terrifying new development. Because you realize up until now we didn't even think that dead guys could get corona." - Trevor Noah

"He's in the hospital now. He claims he's feeling good; he claims he's recovering quickly. He's feasting on the blood of newborn babies in the maternity ward." - Jimmy Kimmel

"Apparently the doctor asked, 'When did you start feeling a little off?' and Rudy said, 'Right around 2009.'" - Jimmy Fallon 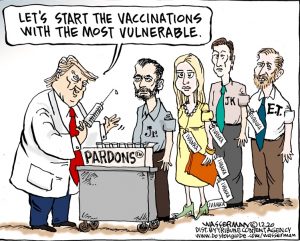 On President Trump's consideration of pardons to his family and Guiliani
Aw, guys, that is adorable. Trump is pardoning his kids and his house pets." - Trevor Noah

"It's not a great look for your presidency when your biggest accomplishment is 'most family members pardoned...It's pretty crazy, the last person who needed pardons for their whole family was Charles Manson." - Jimmy Fallon

"Some families get each other sweaters for Christmas, the Trumps get pardons."  - Jimmy Fallon

Trump already pardoned his former national security adviser, Michael Flynn, on the Wednesday before Thanksgiving. "On one hand, Flynn is thrilled. On the other, he's like, 'You pardoned the turkey before me?'" - Jimmy Fallon 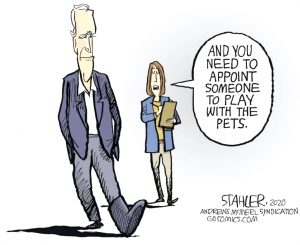 Major Mishap: On Biden wearing orthopedic boot after fracturing his foot playing with his dog Major

"So in a way, Trump and Biden both got the boot this month," - Jimmy Kimmel

"Apparently, he slipped and fell while playing with Major, his dog. The Pentagon today announced that Major has been demoted to captain." - Jimmy Kimmel

"Someone check who that dog voted for" -- a suspicious Trevor Noah

"When the news broke, Kamala Harris was stretching in the bullpen like, 'I guess I'm getting in the game sooner than I thought.'" - Jimmy Fallon

"And why does Biden need a walking boot? He shouldn't be walking, he should be riding a golf cart everywhere. It's called being presidential." -- Trevor Noah 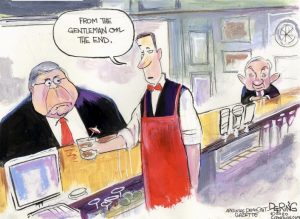 "Speaking of Donald Trump, Bloatus weighed in on Biden's injury, tweeting: 'Get well soon!' He's just jealous because Biden has a dog and all he has is Mike Pence." - Jimmy Kimmel

On Attorney General Bill Barr acknowledging that the Justice Department had uncovered no wrongdoing "on a scale that could have effected a different outcome in the election."

"Fraud on a scale - also known as the president's annual physical." - Stephen Colbert

"William Barr has been one of Trump's most obnoxiously loyal allies throughout - emphasis on 'lies' in allies. This would be like if Thelma turned on Louise." - Jimmy Kimmel

"He will be missed." - Stephen Colbert

DemDaily: Your Guide to The Democratic National Committee

February 2, 2023 The Democratic National Committee (DNC) is holding its Winter meeting this week, its bi-annual gathering to address party business, reports, resolutions and strategy. The meeting...