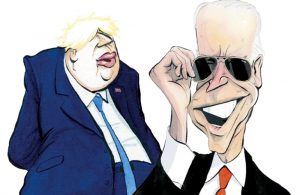 On Biden's Trip to Europe
"Come on, Europe, you can't judge us. You had fascists; we had fascists. You have rulers that marry their cousins; we have Rudy, who married his cousin. You had Nosferatu; we have - we have Rudy. Potato, pot-ah-to." - Stephen Colbert

"It's going to be a little awkward trying to mend fences. Every speech he gives is going to begin with 'Uh, hey, look, about the last guy - sorry about that.'" - James Corden

"And both sides got some concessions, right? The U.K. agreed to limit the number of royal refugees that they'll send to the U.S., and in exchange, the U.S. agreed to start putting the letter 'u' back into words again. Plus, the U.K. will produce more Harry Styleses, and the U.S. will start calling soccer 'football' and football 'brain ouchy time.' Everybody wins." - Trevor Noah

Biden also met with US troops stationed in the UK, who cheered his promise to meet with Russian President Vladimir Putin "to let him know what I want him to know." "Turns out the troops enjoy having a commander in chief who's fighting on their side." - Stephen Colbert

On the swarm of Cicadas that grounded Biden's plane
"Forget the Secret Service; that man needs a SWAT team!" - Stephen Colbert

"Tomorrow, that cicada will be on Fox News in a neck brace calling for Biden to be impeached: 'See what he did to me! It's on tape.'" - Jimmy Fallon

"The cicada returned to his buddies like, 'Damn, the old man's quicker than I expected.'" - Jimmy Fallon 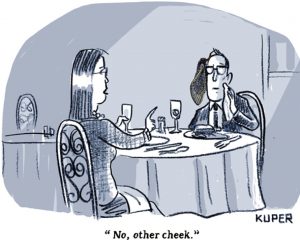 "Meanwhile, Mike Pence was like, 'Bugs on your head - you're supposed to save that for the big debate.'" - Jimmy Fallon

On Biden's pending meeting with Putin

"Well guys, the White House announced that President Biden will have his first one-on-one meeting with Vladimir Putin on June 16. Yeah, it's a nice reminder that after a year in quarantine, you're going to have to see some people you don't like." - Jimmy Fallon

"I can't wait to see how these two guys try to out-macho each other during the summit. It's like, [imitating Biden] 'I don't need a bathroom break, do you?' [imitating Putin] 'No, in fact let's take off our shirts and have a pec-flexing contest.'" - Jimmy Fallon 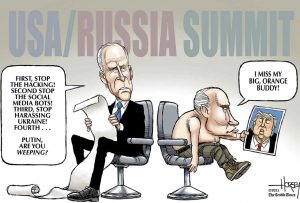 "Yep, this will be their first in-person meeting since Biden told Putin, 'I don't think you have a soul.' It's going to be fun when Putin tells Biden, 'Say once more so I can use for outgoing voice mail.'" - Jimmy Fallon

"They just hope it does not come down to a staring contest, because both of those guys have had a lot of Botox. Could be a long one." - Seth Meyers

Biden outlined the stakes of his meeting with Putin, since "we have to discredit those who believe that the age of democracy is over". "I agree, so stop trying to negotiate with them on an infrastructure bill!" - Stephen Colbert 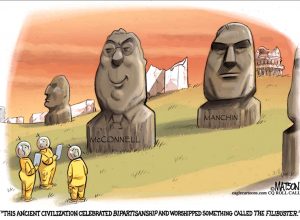 "This is why it's absurd to contemplate bipartisan cooperation with the Republican party, and yet for some reason Joe Biden, and certain members of the Democratic party, like Joe Manchin, still seem obsessed with it." - Seth Meyers

"You guys are the ones purging someone from GOP leadership for questioning party dogma. You're like Dorothy in the Wizard of Oz - it turns out the cancel culture you were looking for was right there inside you all along." - Seth Meyers

On the Trump-Reilly Speaking Tour
Trump "is teaming up with Bill O'Reilly for a series of live events they're calling 'The History Tour,' which was also the name of Michael Jackson's tour 25 years ago. And wait until you hear those two duet on 'The Girl Is Mine.'"  - Jimmy Kimmel

"Better lock up your daughters. Seriously, though, it's probably best if you do. You know, just till they're out of town." - Seth Meyers

"It should be a fun tour. Backstage passes automatically come with a hush money payment of $130,000. Isn't that nice?" - Jimmy Fallon

"When he heard, Sean Hannity was like, 'Well, I met someone new and totally awesome, too, so.'" - Jimmy Fallon 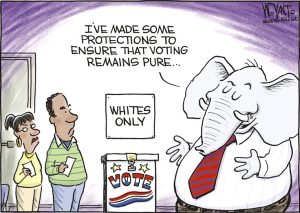 "But it raised a lot of questions, like: How did he zip the pants? Was his belt also on backward? And how lucky are we that this man no longer has the nuclear codes?" - Stephen Colbert

"On Twitter, the former president quickly drew comparisons to '90s child hip-hop duo famous for wearing their pants backward, Kris Kross. That's ridiculous. Their initials are 'K.K.,' which is one less than the ex-president prefers." - Stephen Colbert

Trump On Trial
"Last night, the New York state attorney general's office announced that it is now pursuing a criminal investigation of the Trump organization. This is a huge deal. I mean, I think it is. I have no idea. I also thought the multiple impeachments were a huge deal at the time." - James Corden 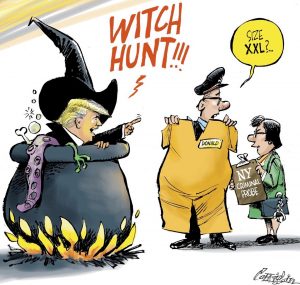 "They're looking at whether Trump lied about the value of his properties to get loans approved and to pay lower taxes. Does this really need an investigation? I feel like he spent four full years bragging about doing exactly that." - James Corden

"In addition to being a potential crime, 'unscrupulous asset evaluation' sounds like something Trump would put under 'interests' on his Tinder bio." - Seth Meyers

"We know a trial is close when the courtroom sketch artist goes to Michaels and says, 'Give me all the orange crayons you have.'" - Jimmy Fallon 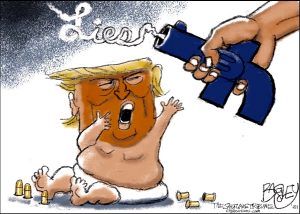 "Can you imagine Donald Trump on trial? Putting that little orange hand on a Bible, suddenly the Bible bursts into flames. He escapes in the chaos like a Batman villain." - Jimmy Kimmel

"But don't worry, Trump supporters, Rudy Giuliani is on the case." - James Corden

"Yep, Trump knew he was in trouble when he called his lawyer and the F.B.I. answered Rudy's phone: 'You're being recorded.'" - Jimmy Fallon

Longtime Trump lawyer Michael Cohen said in an interview that the former president would turn on anyone to save himself, including his own children. "Said Trump: 'Alleged children.'" - Seth Meyers 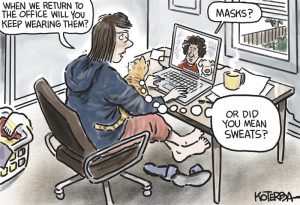 On COVID
"As of yesterday nearly 50 percent of all Americans have gotten at least one dose, and Covid deaths are as low as they've been since last summer. Yes, 'Low Death Summer,' my favorite Beach Boys album." - Stephen Colbert

On the confusion over the CDC's relaxation of mask guidelines, "Which isn't surprising, since experts have been disagreeing with each other throughout this pandemic - is it airborne? Is it safe to go back to school? Do you have to pay for a gift at a Zoom wedding?" - Trevor Noah

"If it keeps getting better at this rate, they say that by July 1 of this year, we'll need a new excuse to not want to see people." - Jimmy Kimmel 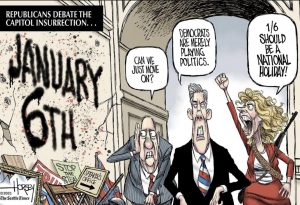 On the Capitol Riot Commission
"The House voted 252 to 175 to form a commission that would investigate the January 6 Capitol riots. But that's right, that's almost half of the House voted 'no'. It's like playing a game of Clue and half the players are like: 'I think we just let this one go, right? With the pipe and the library - we're good.'"

"Yeah, not only did 175 Republicans vote against the commission, they also want to make January 6 'Bring your insane rioter to work day.'"

"The bill now heads to the Senate, where it needs support of 10 Republicans. Come on, there's a better chance of 10 dentists supporting Mountain Dew Cake-Smash." - Jimmy Fallon 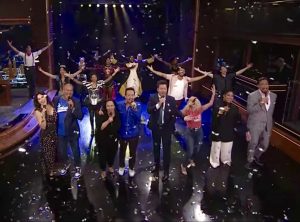 On a Positive Note: Lin-Manuel Miranda and Jimmy Fallon celebrate "Broadway's Back" (Click/Watch!)

July 18, 2017    Three months ago, the results of the contentious 2016 presidential campaign were too fresh and painful to start thinking about the 2020 White House contest and potential...