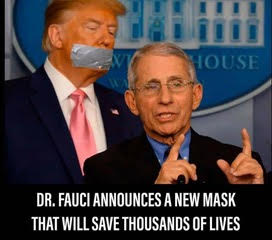 On Dr. Anthony Fauci
The sudden fame of Dr. Anthony Fauci, America's leading expert on infectious diseases, has led to rabid fans, merchandise with his face on it and so many threats that he's getting enhanced security.

On his "The Daily Social Distancing Show," Trevor Noah said that no one needs more protection now than Dr. Fauci, "the man whose calm leadership during this crisis has won him the respect of all intelligent people - and President Trump."

"I'm not sure the best way to protect a 79-year-old man right now is to surround him with people 24 hours a day." -- Stephen Colbert 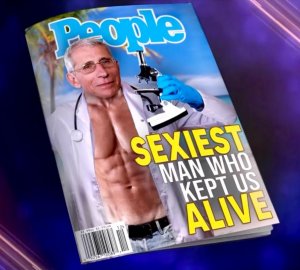 "Who would threaten the one guy holding this country together right now? This is like if you were on a cross-country flight and said, 'Where is the pilot? I am going to beat his [expletive].'" -- Jimmy Kimmel

"A seafood restaurant on Long Island has named a dish after infectious disease expert and coronavirus task force member Dr. Anthony Fauci, which features linguine in a white clam sauce. They also have a dish named after Trump where you order 30,000 fried shrimp and then a month later they bring you three fish sticks." -- Seth Meyers

"You can actually buy a Dr. Fauci bobblehead doll. This bobblehead is a little different because whenever it hears a Trump press conference, it slowly shakes its head back and forth." -- Jimmy Fallon

"People are just like, 'I gotta get me some of that Fauci. You know he got that vaccine, girl.' Who's sexier than Fauci? No one's sexier. If People magazine doesn't put him on the cover, they're wasting their lives." -- Trevor Noah 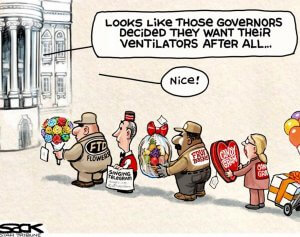 On Response by Governors
"Some of our elected officials are slow on the uptake." Republican governors in 11 states have still refused to issue stay-at-home orders. "They're defiant to the end," said Stephen Colbert, though some are coming around, such as Florida's governor, Ron DeSantis, who finally ordered people home on Thursday, citing the president's "demeanor the last couple days."

"So it wasn't the data, or the scientists - it was Trump's 'demeanor.' How does that work? Is he the coronavirus groundhog?" -- Stephen Colbert

"The governor of Georgia (Brian Kemp) said yesterday that he just learned in the last 24 hours that asymptomatic people can transmit the coronavirus. So he's probably three weeks out from learning what 'asymptomatic' means." -- Seth Meyers 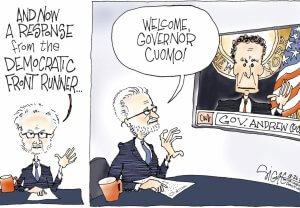 "How can a governor be so far behind the curve, hm? A governor. I just picture him, now, what, watching Season 3 of 'Westworld' like, 'Guys, I'm starting to think some of these people might be robots. I don't know. Something about them.'" -- Trevor Noah

"You didn't know that until yesterday? It's all anyone's been talking about since January! You're like a guy saying, 'You know, I finally started watching this "Game of Thrones." No one told me there were dragons in it! This is a game-changer!'" -- Stephen Colbert

New York's Governor Andrew Cuomo has "projected an air of much-needed competence during the epidemic and the people. Are. There. For. It. The hashtag #presidentcuomo has been trending on Twitter, and a Jezebel op-ed asked 'Help, I Think I'm In Love With Andrew Cuomo???'" -- Stephen Colbert 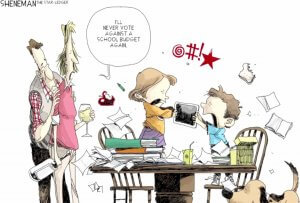 On Jared Kushner, Donald Trump's son-in-law, who is now an official advisor on the federal response to COVID-19. Kushner reportedly pushed back on New York Governor Andrew Cuomo's request for more ventilators, calling Cuomo an alarmist and saying they were not necessary based on his "own projections."

"Oh, you're doing your own projections? Did your parents just buy you a TI-84 [graphing calculator]? You're not qualified to do anything, let alone tell New York how many ventilators they need. You're a nepotism case, and you only got the White House job because you married into the family, and because the security guards believed your fake ID." -- Seth Meyers 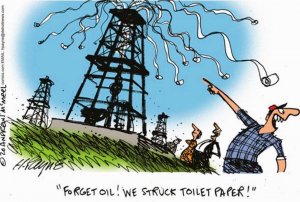 On Nancy Pelosi's response to Stephen Colbert's question on how anxious Americans can cope amid the crisis. "Don't hesitate to enjoy, or rest. I always say to my members that recreate and recreate are the same word. It's important to recreate, that is relax, so that you're strong and recreate it for the fight ahead."

Colbert: "OK, you heard her, America. Pleasure is good right now. The speaker says don't forget to pleasure yourself." "Not quite," Pelosi replied.

On True Leadership
Because we need inspiration where we can find it ... 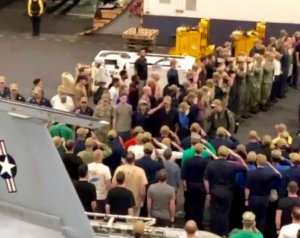 Captain Brett Crozier, commander of a US aircraft carrier that has been hit by a major outbreak of coronavirus, was relieved of his command this week after a memo he sent to Navy leadership pleading to help save the lives of his crew went public.

"We are not at war. Sailors do not need to die. If we do not act now, we are failing to properly take care of our most trusted asset - our Sailors," wrote Crozier in appealing for his 4,000+ crew, over 100 of which had been infected with COVID-19.

Trump's Acting Secretary of the Navy Thomas Modley said the Captain was fired for "poor judgement" in going outside of the chain of the command. Crozier's crew disagreed (Click!).

SignUp for Daily updates on the issues, politics and the players
Forward and Follow on Facebook, Twitter and LinkedIn
DemList relies primarily on individual contributions for support.
Please help with $25, $50 or $100 here!