Every once in awhile. To remind us to laugh.

On the trade war between the US and China:
"As you know, this all comes as a response to President Trump recently increasing tariffs on Chinese goods. I'm not an economist, but I think it's because someone's a bit jealous of someone else's wall." -- James Corden 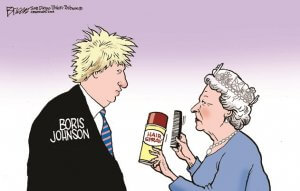 And that China would no longer buy any agricultural products from the United States, "I mean, getting rid of corn - that part's going to be easy because every Democrat running for president eats two ears of corn at the Iowa State Fair. And if my calculations are correct, that's about 10 million. How many people are running? It works out." -- Trevor Noah

On Boris Johnson being elected as the UK's Prime Minister:
Noting that Johnson has been called the "British Trump," John Oliver argued that Johnson is "more complex" than Trump.
"He presents his own lack of of preparation so charmingly that you actually doubt he is unprepared but he is," Oliver said. "Can you imagine trump having that level of self-reflection?"

On Trump fundraiser hosted by SoulCycle Gyms owner Stephen Ross, and celebrity boycotts of the gyms:
"So go ahead and boycott, I haven't gone to the gym in the past three months in preparation for this moment."  ... "Fundraising - it's as integral a part of American politics as low voter turnout and terrorizing babies." -- Trevor Noah

On the Democratic Debates 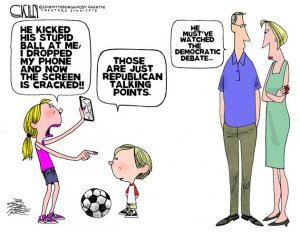 "Over the last two nights, we've watched 20 Democrats arguing. Usually, if you want to see that, you have to walk into a Whole Foods and start criticizing 'Hamilton.'" -- James Corden

"It was all about the moderates, baby! It was the tempest of the centrists! It was the rage for incremental change!" -- Stephen Colbert

"Networks have a vested interest in getting the candidates to fight with each other for the drama. So front-runners stand up there and get brutally horsewhipped for hours, while the man Democrats really want them to attack, Donald Trump, is barely mentioned. But you know who has the courage to talk about Donald Trump? Donald Trump."  -- Stephen Colbert

On entrepreneur Andrew Yang differentiating himself from President Trump, saying, "The opposite of Donald Trump is an Asian man who likes math," "A great point, but I actually think the opposite of Trump would be a black guy who is a good president." -- Seth Meyers 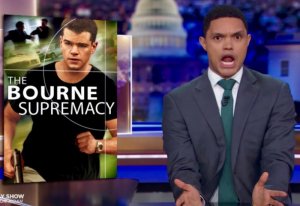 "What other kind of supremacy is Trump concerned about? 'That's right, we're under threat from white supremacy and The Bourne Supremacy.' Very confusing plot." --Trevor Noah

"Oh, I'm so sorry. The opposite of Donald Trump is a black woman who has spell-check." -- Stephen Colbert

On Senator Kirsten Gillibrand's saying her first act as president would be to "Clorox the Oval Office:"
"O.K., first of all, I don't think it's legal to use bleach on an active crime scene. Secondly, you're definitely, definitely going to need something stronger than Clorox. I would try burning sage or holding a séance." -- Seth Meyers

On The Mass Shootings
On President Trump's address to the nation when he offered condolences to the people of Toledo, which is not one of the cities that had a mass shooting. So that was basically the mass shooting equivalent of saying the wrong person's name in bed." -- Trevor Noah

"Wrong city, but don't worry, sir. It's not like Ohio's that important in presidential elections." -- Stephen Colbert

"And apparently it worked. 'I found it comforting when Trump went to Texas,' said a woman in Ohio." -- James Corden

"We're not going to solve America's gun problems in half an hour, but we'll probably do more than Congress." -- Trevor Noah

"It's all well and good to offer thoughts and prayers, but sometimes you need shouts and swears."
-- Stephen Colbert 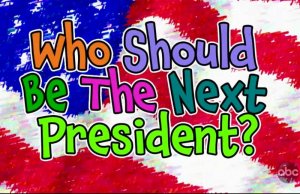 John Oliver concluded his serious monologue on the shootings, "I'm sure we're going to learn more about this story in the weeks and months ahead."  But in the meantime, "please, after a tough, tough day, please enjoy this nonsense."