We are increasing our humor roundups to monthly. Reasons to laugh, it appears, are in demand. 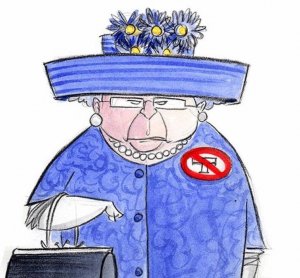 On President Trump's visit to the United Kingdom, and his claim the large crowd of people protesting his visit were mainly there to welcome him.

"Well, if there's one thing Trump knows how to estimate, it's a crowd size." - Jimmy Kimmel

"Now the British know what it is like when an unwelcome white person shows up, stays too long and shows you how to run your country in a language you don't understand." - Trevor Noah

"How can a man have access to the nuclear codes but not a tailor?" 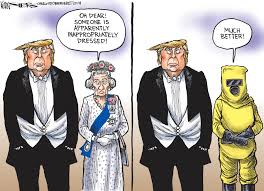 "I knew Robert Pattinson was picked to be the new Batman, but now I guess we also know who is going to play the Penguin." - Trevor Noah

On President Trump's attendance at the D-day commemoration, "He initially agreed to attend because he thought the D stood for Donald."

"The only beach Donald Trump would storm is spring break in Daytona." - Jimmy Kimmel

On Piers Morgan interviewing Trump, asking whether he regretted not serving in the Vietnam War, having received military deferments for a claim of bone spurs. Trump said no, because not only was he not a fan of the war, but it was "far away." 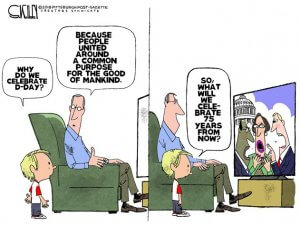 "Yes, that is what is horrible about war - the commute." - Stephen Colbert

On Morgan asking Trump about his meeting with Prince Charles, whom the president described as "really into climate change" and someone who cared about "future generations" and "people."

"[Imitating Trump] I don't understand. I totally don't get this guy. Why would a prince or any leader care about the people of his country? What's the angle? Is he trying to sell like a climate-branded vodka or something like that?"

"If Prince Charles is smart, he would have talked exclusively about the impact on the fried chicken industry."  - Jimmy Kimmel 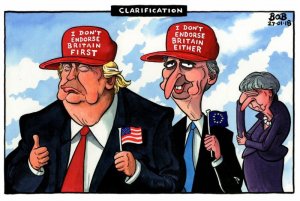 On Axios interview with Jared Kushner when Kushner was asked if he thought his father-in-law was racist, using Trump's birtherism in reference to President Barack Obama as an example. Kushner responded that he "wasn't involved" and therefore could not comment.

"That's an interesting way to think of racism: You can only identify it if you see it firsthand. 'Was slavery racist?' 'I don't know, man! I wasn't there, O.K.? I've just heard good things, I wasn't there!'"- Trevor Noah

"Wow, Jared hasn't been taken to the woodshed like that since he was carved by Geppetto." - Stephen Colbert 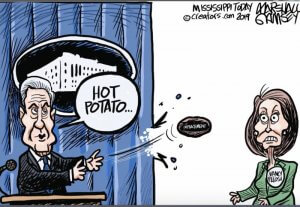 On Robert Mueller's press conference: "I can't believe how much Mueller's press conference has emboldened the (2020) Democrats. You realize like a week ago they were considering impeachment, and now they're fully in. It's like if your granny was, like, finally ready to consider getting an email address and then a week later, she's indicted for hacking into the Pentagon." - Trevor Noah

On Nancy Pelosi's Impeachment restraint: "She's like that grizzled police chief who needs to calm down the rookie cops. You want people thinking about things other than impeachment: women's rights, free colleges, universal healthcare, a Hemsworth in every house - all the major promises." - Trevor Noah 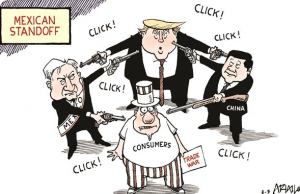 On Trump's threat to impose tariffs on Mexico. "Everyone is gonna feel these tariffs. Our top four agricultural imports from Mexico are beer, avocados, tomatoes and tequila. Trump is putting a tariff on summer!" - Stephen Colbert

On Trump's trip to Japan over Memorial Day weekend, "I don't like it when he leaves the country. It makes me nervous. It's like being at your wedding and watching your drunken uncle hit on your friends." - Jimmy Kimmel