Every few months we like to do a humor roundup, as a reminder there are still reasons to laugh. 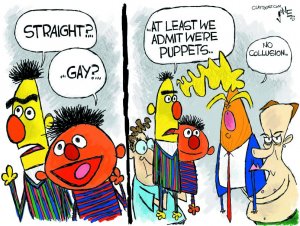 Jimmy Kimmel
Trump "keeps saying, 'Hire American,' even though he doesn't. In July, you may recall, they filed to hire 78 foreign workers at Mar-a-Lago, his golf club in Florida. And that doesn't even include the 15 Russian spies he has working in the I.T. department."

James Corden
"The only people the president feels he can really trust are family. Which explains why he starts a new family every few years."

On Senator John Kennedy's (R-LA) comment that the sexual assault allegations against Kavanaugh had turned the confirmation process into "an intergalactic freak show" --  "I like to think that billions of light-years away, an emperor of some alien galaxy is really offended that someone just compared him to Brett Kavanaugh."

Jimmy Fallon
"Trump is campaigning for the midterms in Las Vegas, and out of habit, the moment he walked into a casino, it went bankrupt."
"This morning Trump tweeted that Am 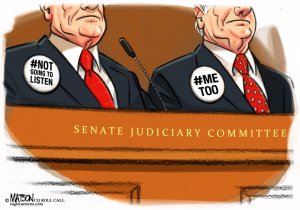 ericans who are unhappy with their jobs should start looking for new ones. And five minutes later he walked into the West Wing and everyone was gone."

"Stormy Daniels has written a book about Trump, and an advance copy just came out. And she actually writes about her night with Trump in detail. Which explains why every book comes with a bottle of Pepto-Bismol and a straw."

"The White House is now planning a second meeting between Trump and Kim Jong-un, which means in the last few months Trump will have seen Kim Jong-un twice as many times as he's seen Melania."

Stephen Colbert
"The Senate is trying to rush Brett Kavanaugh's confirmation process. This marks the first time anyone in the Senate has ever rushed to do anything."

"Conservatives are defending Brett Kavanaugh from allegations of sexual assault. It's the usual GOP story of, "he said, he don't believe what the woman said." 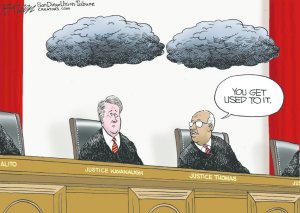 "How is it never the right time to bring up assault allegations against a rich white dude?"

Trevor Noah
"Trump sounds like he's doing a book report on hurricanes and he forgot to read the book. 'Tremendously big and tremendously wet! Oh, and a lot of people don't know this: The rain is coming from the top.'"

Seth Meyers
"Former first lady Michelle Obama has announced she's adding dates to her upcoming book tour due to overwhelming fan demand. And Sean Spicer announced that his book tour has really given him a chance to enjoy some "me time."

for the second day in a row. It's the first time an accused sexual assaulter has gotten into the White House without the Electoral College." 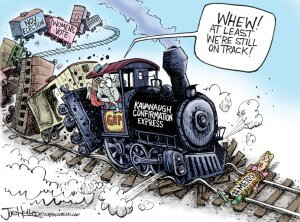 "Paul Manafort on Friday struck a deal to cooperate with the Mueller investigation. And then Trump struck a door, two walls and Eric."

DemDaily: The COVID Count. In Your State.

June 24, 2021 As our country emerges from the worst of the deadly coronavirus pandemic that has claimed the lives of more than 600,000 Americans over the last 15 months, we need to be reminded...