Every few months we like to do a humor roundup, to give relief from the fray.

Jimmy Kimmel
"We don't have (the show) Scandal on Thursday nights any more, so the president has been working overtime to fill that hole for us, and boy, did he deliver the goods for us this week."

"I think I know what's going on ... I think their strategy right now is to put someone out there who's even nuttier than Trump to make him look normal by comparison, and it's working." 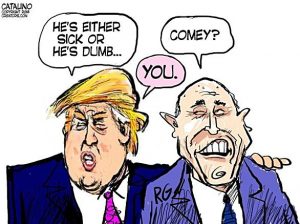 James Corden
"Then Trump wrote, 'Why do we work so hard in working with the media when it is corrupt? Take away credentials?'  Trump wants to know if he should take away the credentials of people spreading fake news. [shows screenshot of Rudy Giuliani] And the answer is: Yes. Yes, he should."

Stephen Colbert
On Trump's National Prayer Day comments: "Trump might want to start praying himself because he's got some problems. Last night Hurricane Rudy made landfall on Fox News, and Trump may have to declare himself a disaster area." 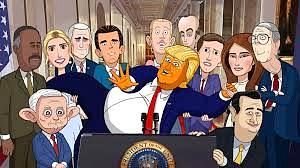 "She did not pull any punches and some people were offended by what she had to say, presumably the people who have been in a coma for the past two and a half-years ... But grow a pair. This was a roast, and you're the ones who hired Michelle Wolf. Being mad at her for doing her job is like accusing the valet of briefly stealing your car."

Trevor Noah
"Michelle should have had the decency not to comment on women's appearances in any way, shape or form ... She's a comedian, for God's sake, not the president."

On Kanye West's comments on TMZ about slavery being a choice for 400 years: "No Kanye, slavery is not a choice ... Going blond is a choice. Both are terrible but one is easier to undo." 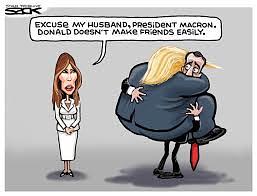 Conan O'Brien
"Three American citizens were released today after being held prisoner in North Korea for as long as two years. But when they found out Donald Trump is the president, they immediately fled back to North Korea."

(After hearing the news) "Melania Trump asked, 'Hey, if you're freeing hostages, can I go too?'"

Jimmy Fallon
"It's pretty crazy that Stormy Daniels' money could be traced all the way back to Vladimir Putin. In response, Putin said, 'Donald can spend allowance however he wants.'"

Jordan Klepper
On Michael Cohen: "What would happen if Entourage and The Sopranos did a crossover episode."

"You can't swing a dead cat without hitting Stormy Daniels' lawyer Michael Avenatti somewhere in the TV news landscape ... It's because TV is all about one thing: sex appeal. And 'beefcake lawyer' Michael Avenatti is hot. Giving the vapors to The Ladies of The View, hot.  Rudy Giuliani, we can all agree, is not." 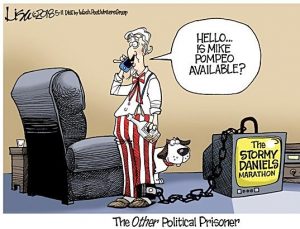 Seth Meyers
"According to The New York Times, the shell company that President Trump's personal lawyer, Michael Cohen, used to pay Stormy Daniels received payments from AT&T. To thank them, Cohen will be using AT&T for his one phone call."

On Trump's doctor, Harold Bornstein: "If you're supposed to dress for the job you want, then I think he wants to be a Grateful Dead roadie or a manager at Guitar Center ... He looks like Donald Trump if Donald Trump was in the witness protection program."