Posted May 7, 2021 | by Donald Wolford | in DemDaily, Uncategorized 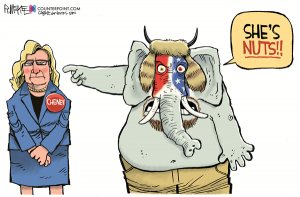 On Republicans acting to remove Liz Cheney from House Republican leadership
"Liz Cheney said Republicans have to choose between the truth and Trump, to which Republicans said, 'The truth never gave us free hats.'" - Jimmy Fallon

"The GOP doesn't push Trump - Trump pushes the GOP. And remember, Trump's not even in government. He's a retired, semi-amateur golfer living in a weird Gothic swamp hotel with a bunch of Palm Springs radiologists and Russian spies." - Seth Meyers

"It is a little weird to see a party be so loyal to a guy who doesn't have a loyal bone in his body - or possibly any bones in his body. But loyalty to Trump is a defining principle of the GOP right now. And if she doesn't agree with that, it doesn't make much sense for her to be one of the party's leaders. Like, I think Greta Thunberg makes some great points, but I don't think that she should be on the board of ExxonMobil." - Trevor Noah 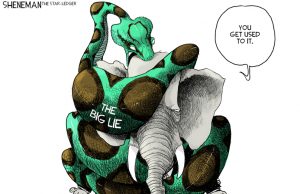 On Facebook's decision to extend the ban on Donald Trump's account and Trump starting his own "platform"
"It has been five months since Trump was indefinitely suspended from Facebook for the minor infraction of trying to overthrow the government. I mean, who hasn't done that?" - Trevor Noah

"So, if you want to see crazy conspiracy theories, you'll have to settle for any other person on Facebook." - Jimmy Fallon

"Trump calls this a platform, but it's really just a website that he calls 'a place to speak freely and safely.' There's only one problem: The site doesn't allow any replies or comments or even likes. The only person speaking freely, or even at all, is him." - Jimmy Kimmel

On the recent photo of Joe and Jill Biden visiting Jimmy and Rosalynn Carter
"Why do the Bidens look five times bigger than the Carters? Is there some dollhouse filter that I didn't know about, because I've been staring at this thing the whole day and I still can't figure out what's going on. I can't figure out if the Bidens had a late growth spurt, or if they're playing with Jimmy Carter action figures, or maybe both at the same time." - Trevor Noah 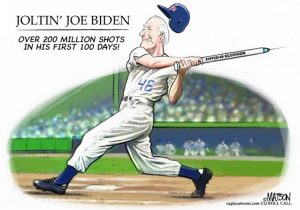 "Honestly, this is the weirdest picture of a president since, well, any picture of Donald Trump." - Trevor Noah

On Biden's recent address to Congress on the eve of his first 100 days
"Today marks the end of President Joe Biden's first 100 days in office, which is the period where every president tries to get their big things done. You know, FDR introduced the New Deal, Ronald Reagan rolled back the welfare state, and Bill Clinton installed that stripper pole in the situation room." - Trevor Noah

"And to celebrate the occasion, last night Joe Biden delivered his first address to Congress. Yes, for hundreds of years Joe Biden has sat and watched other presidents give speeches to Congress, but now it was his turn." - Trevor Noah

"President Biden tonight laid out the specifics for his 'American Families Plan.' Trump had a family plan, too, but his was to give jobs to everyone in his family." - Jimmy Kimmel 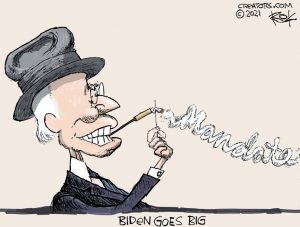 "Get this: 85% of people who watched Biden's speech approved of it. That's amazing. The only other things Americans like that much are Dolly Parton and cheese fries."- Jimmy Fallon

"In Trump's first 100 days he accomplished a lot, too. He tweeted that Snoop Dogg's career was failing, that Nordstrom was mean to Ivanka, and that he was a better host of 'The Apprentice' than Arnold Schwarzenegger." - Jimmy Kimmel

"President Biden called on Congress last night to create a new agency to develop breakthrough treatments for diseases such as Alzheimer's and cancer, and who knows, maybe even narcolepsy." - Seth Meyers

On the FBI's raid of Rudy Giuliani's home and office
"The FBI showed up with search warrants at 6 o'clock this morning. They made sure to show up in daylight, when Rudy was still asleep in his coffin" - Jimmy Kimmel 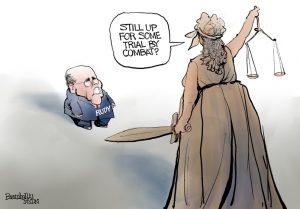 "Come on, that's way too early! Rudy's not himself until he's had his first cup of hot breakfast wine." - Stephen Colbert

"I know Rudy Giuliani is a high-powered lawyer, mayor of New York City, adviser to the president of the United States, but I still picture his office above a repair shop right next to a palm reader's." - James Corden

"When the agents walked in, Rudy got so nervous, he started sweating hair dye and tucking all the evidence down his pants." - Jimmy Fallon

On the 93rd Academy Awards
"The ratings for the Oscars plummeted from 23 million last year to less than 10 million this year. How can something so woke put so many people to sleep?" - Jimmy Kimmel

"The ceremony was watched by a record-low 9.9 million people. Yeah, 9.9 million. That's like taking everyone who watched 'Mank' and adding 9.8 million." - Jimmy Fallon

"There were some surprises, notably in the category of Best Actor. Everyone thought that would go to the late Chadwick Boseman. They even saved that category for the end of the show, assuming it would be a big emotional moment to wrap it up. But instead of Chadwick Boseman, Anthony Hopkins won Best Actor for playing a man with dementia in 'The Father,' and he was so committed to his role, he forgot to show up for the Oscars." - Jimmy Kimmel

"If your main concern is that Bill Gates could use microchips to track you, he could already do that, that's what your phone is." - John Oliver

On the 51st Earth Day
"Earth Day started back in the '70s with very lofty goals and has kind of turned into, 'Guys, please, just for one day try not to light garbage on or near a panda bear, OK?'" - Jimmy Kimmel

"Happy Earth Day! Everyone is in the spirit. This morning at 7-Eleven, I saw a rat drinking a Big Gulp with a metal straw." - Jimmy Fallon

"I'm kidding around, but protecting the Earth is serious. I mean, can you believe that in 1999, we had nearly 50 Rainforest Cafes, and now we're down to almost 20?" - Jimmy Fallon 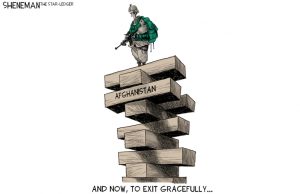 On Biden announcing an end to the 20-year war in Afghanistan "To put that another way, this war is too old to date Matt Gaetz." - Stephen Colbert

"Twenty years is a long time. Those are 17th-century European numbers. That's the kind of war you fight because the Spanish contessa rejected your proposal to unite the kingdoms and eloped with the Duke of Saxony." - Stephen Colbert

"It's been going on so long, the first 'Iron Man' movie opens with Tony Stark in Afghanistan. This conflict's older than the Marvel Cinematic Universe. It's an 'Infinity War' with no 'Endgame.'" - Stephen Colbert

SignUp for Daily updates on the issues, the politics and the players.
Follow on Facebook, Twitter and LinkedIn
DemList is taking a short vaca and will be back next Wednesday, May 12th